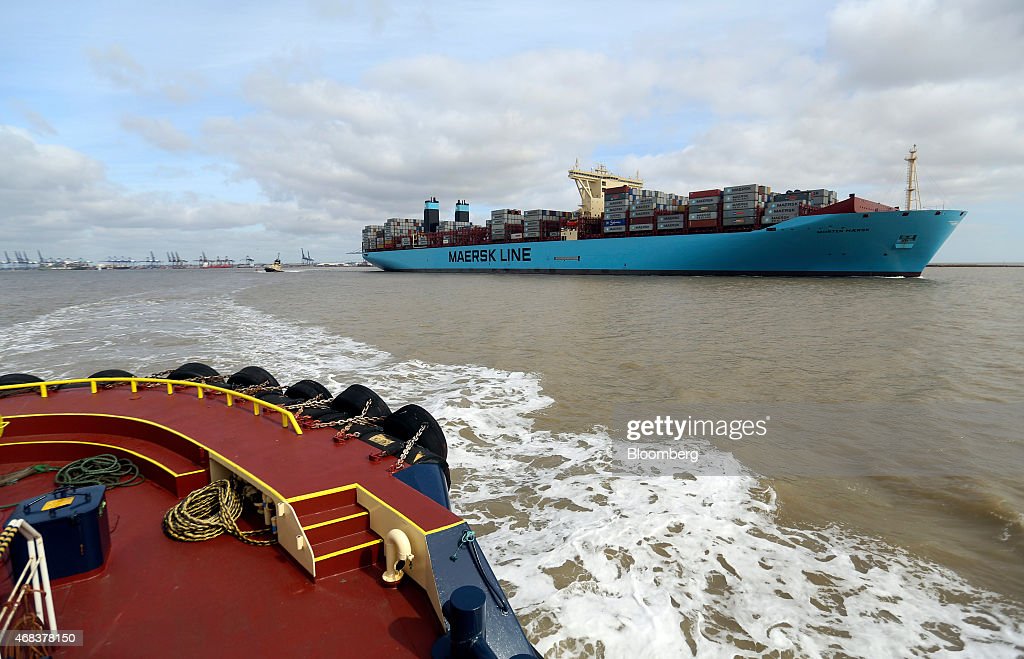 A harwich Haven pilot boards the 399 metre Morten Maersk as cargo operations were almost complete. The cranes over the mid to aft of the ship were booming up. Two Svitzer tugs were ordered for departure. They both leave the tugs pontoon to stand by the ship. The pilot radios Harwich VTS to say there was a bit of lashing to complete but would like to make the tugs fast as soon as. the ship was almost ready to depart, 13 metre draught for her next port of Tanjung Pelepas in Malaysia. Duty tug, Svitzer Intrepid radios the Morten Maersk to find out how the pilot intended to use the tugs. The pilot replies the he would like the Deben aft and the Intrepid forward both on the centre leads. The offshore lines fore and aft were slackened to make it easier to make the tugs fast. Deben was made fast and backs away ready to work, at the bow of the Morten Maersk a crew member was getting ready to throw down a heaving line down for the Intrepid so their tow line could be made fast onto a bollard for the pull off. A coulpe of minutes later, the Intrepid all fast forward, starts to back away as the Stena Britiannica passes through the harbour from Parkeston Quay bound for Rotterdam. Singling up to just spring lines fore and aft, the pilot requests permission to break away from Felixstowe berth 9. Permission granted, the springs were released. The pilot starts with just the wind and tide to push her off the berth before increasing the power of the Deben aft while using the bow thrusters to help the bow out. Shortly after the pilot gets the Intrepid to build up power before getting them to pull full power to get the bow into the channel. After a straight pull off into the channel, the pilot gives a kick ahead on the main engine to keep the mommentum going. Slowly putting more revs ahead on the main engines, Deben eases up and drops in astern while the Intrepid goes right ahead and gets in a position to let go from forward. Intrepid retieving their gear and peels off onto the Felixstowe side. The skipper on the Intrepid asks the pilot if they were required on port quarter for the 90° Beach End out of the harbour. The pilot said that he would like them to lay alongside on the port quarter just incase they were needed. Speed increasing all the time, the pilot gets the Deben to go out onto the starboard side for a powered indirect around the Beach End. Safely around the Beach End, the Intrepid is stood down and makes their way back into the harbour to Berth 9 to wait for their next job of the day. Deben ease and closes up to be released from aft. One released they wait outside the harbour, before proceeding to 7&8 Buoys to make the aft tug on the Murcia Maersk.