10,000-TEU container ship intercepted at sea with a ton of cocaine Video 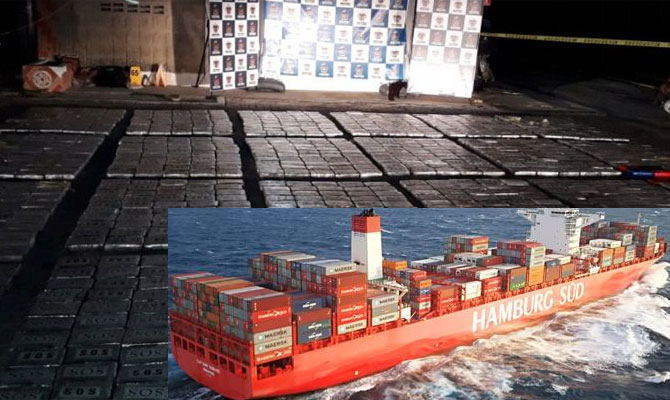 Container ship CAP SAN TAINARO was intercepted by Colombian Navy and fast response team in the Caribbean on Aug 2, off Cartagena, when the ship was en route to Caucedo, Dominican Republic. Anti-drug team boarded the ship, checked containers and found in one of them 1144 packages of pure cocaine, hidden in a container loaded with wine. Total weight of found cocaine is 1144 kilo. 15 persons allegedly related to this shipment were arrested, understood some crew are among them. The ship is engaged on Eurosal Loop 1, cocaine was destined for Antwerp Belgium. CAP SAN TAINARO was taken back to Colombian waters and brought to anchor at Barranquilla Anchorage. As of 0530 UTC Aug 4, CAP SAN TAINARO was in the same position, with investigation ongoing.
Container ship CAP SAN TAINARO, IMO 9633965, dwt 124426, capacity 9600 TEU, built 2014, flag Singapore, manager ENESEL, Cyprus.