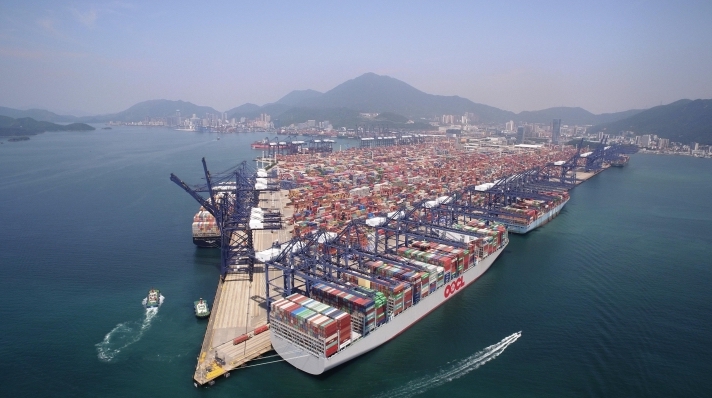 Hutchison Port Holdings Trust has resolved to impose “strict financial discipline” on capital spending in response to the threat of falling volume as the US/China trade war heats up.

Hutchison Port Holdings Trust (HPHT) - the listed entity that holds Hutchison’s terminals in Hong Kong and Yantian, has reduced its CPAEX spending for the period ended 30 June 2018 by 14.4% from HK$462M to HK$398M.
The drop follows a decline in throughput at HPHT’s terminals, and the current uncertain trading environment. “YTD June 2018 throughput of HPH Trust’s ports was 1% below last year. YICT’s throughput was 2% above last year. Combined throughput of HIT, COSCO-HIT and ACT (collectively “HPHT Kwai Tsing”) was 3% below last year,” HPHT noted.
HPHT is no stranger to fluctuating volumes at Hong Kong and Yantian in recent years, but has generally kept up a high level of CAPEX as it positions itself to deliver high productivity on mega ships and implements remote control for some RMGs and RTGs in Hong Kong. However, HPHT is concerned by the situation developing between the US and China. Over the last six months growth in US and transhipment cargo at Yantian has held up the Trusts’ numbers, offsetting a decline in Asia-Europe volumes, but HPHT is not counting on that to continue.
“The prospects for global trade for 2018 face an almost unprecedented level of uncertainty, particularly in consequence of increasing trade tensions and disputes between the United States and both China and the European Union,” HPHT told shareholders.
Furthermore, “The level of uncertainty in political and economic relations as it pertains to trade has increased significantly over the course of the year to date and shows little sign of abating. The impact of measures which may arise out of the trade disputes, especially those between the United States and China, on the performance of HPH Trust for the remainder of the year cannot readily be quantified given the level of uncertainty that currently prevails as to both the specific nature; extent; and timing of such measures and the consequent precise impact they may have on local and global trade flows and, as such, HPH Trust’s business”.
HPHT remains confident it has made the necessary investments and positioned its business to respond to the challenges coming from consolidation and scale in liner shipping, but a trade war is another matter. Accordingly, it is cutting back on CAPEX and keeping a tight reign on costs. “Against this background, the Trustee-Manager remains both vigilant and cautious about expected cargo volume for 2018, particularly in the light of the trade and geopolitical tensions referred to above and will continue to adhere to strict financial discipline”.