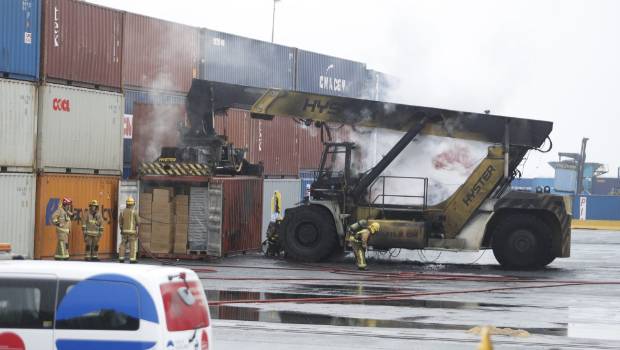 A fire that broke out at Ports of Auckland on Tuesday morning started in a container-moving machine.
Multiple investigations have been launched into a machine fire at Ports of Auckland that injured a worker and sent black smoke billowing across central Auckland.
Maritime and transport unions have also called for Government action after the blaze caught hold of a large container-moving machine on Tuesday morning.
Four Fire and Emergency crews were called and the fire was out by 11am.
The driver was taken to Auckland City Hospital with minor burns to his hands, and discharged in the afternoon.
READ MORE:* Worker burnt after machinery catches on fire at Ports of Auckland* Ports of Auckland worker dies in hospital from injuries
Ports of Auckland spokesman Matt Ball said the fire happened in a reach stacker - a piece of heavy machinery used for loading and stacking containers around the Quay St freight train line..

He said the fire damage meant it would probably be a write off.
The machine's New Zealand distributor, Gough Group, has launched an investigation into the incident.
"This machine is still within its warranty period", said the company's boss, Liz Ward, "so we are working closely with Hyster, who are the machine's United States-based manufacturer."

She said they were also working closely with Ports of Auckland, which had launched its own investigation too.
WorkSafe were notified but confirmed they were not investigating.
Joe Fleetwood, National Secretary of the Maritime Union of New Zealand, said the Government needed to intervene to improve safety conditions.

"I'll say this again, we need to put an end to the toxic culture on the New Zealand waterfront where productivity and profit prevails over safety."
He was calling for the Government to commit to reform the "current lack of enforceable regulations" and implement mandatory safety standards across all ports.
"Last month we saw the tragic death of a young man at the Ports of Auckland, and thank God there was no loss of life in this fire."
The man died after being injured when a straddle carrier he was operating overturned at Ports of Auckland on August 27.

MORE FROMNICOLE LAWTON • AUCKLAND BREAKING NEWS REPORTER
nicole.lawton@stuff.co.nz
Paddy Crumlin, President of the International Transport Workers' Federation, agreed.
"It's fundamental for the ITF, and unions worldwide, that workers to go home safely every day, after every shift. But yet again we have another incident.
"This is another incident at the Ports of Auckland, another incident that again reinforces repeated calls from the Maritime Union of New Zealand for the Government to act."