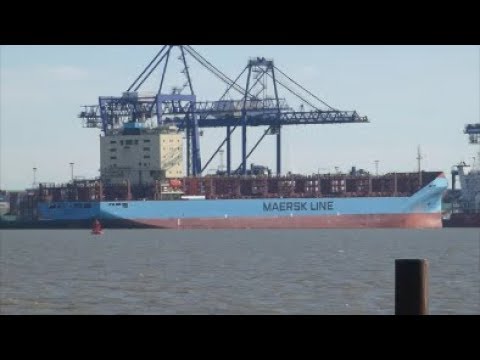 The Venta Maersk was specifically designed for the Baltic, 9 vessels were ordered back in 2015 and 3 years later throughout 2018 these vessels have been delivered. 7 Seago Line, a sub-company of Maersk Line decided to push one of these ice ships to it's limits by a scientific trial journey through the Russian Arctic from Busan in South Korea to Vladivostok then on to St. Petersburg. After this trail the Venta Maersk was re-assigned to the Baltic and Nothern Europe routes which calls at the following ports: Wilhelmshaven, Felixstowe, Kotka and Riga.


As usual, for a maiden voyage vessel, the Venta Maersk arrived to the Port of Felixstowe under the cover of darkeness. She was planned port side to Trinity 5 berth. During her stay she will load up with containers filled with cargo and fresh air (empties) to Kotka. ETD 10am Thursday 11th October 2018


The cargo ferry Somerset which sails as the morning ferry to Europoort finally departs Parkeston 4 after waiting patiently for the ultra large MSC Maya to complete her starboard swing for Felixstowe berth 9. Ready and waiting for the mooring gang which was releasing the Stena Britannica from Parkeston 2. Once the gang had finished with the Britannica, the gang assisted the Somerset off the berth. Coming ahead on the main engines the skipper began a starboard swing off the berth to head down the River Stour, letting the Aasfjord out of the River Orwell and then pass the inbound MSC Eva on the north-south heading just before the entrance to the harbour.