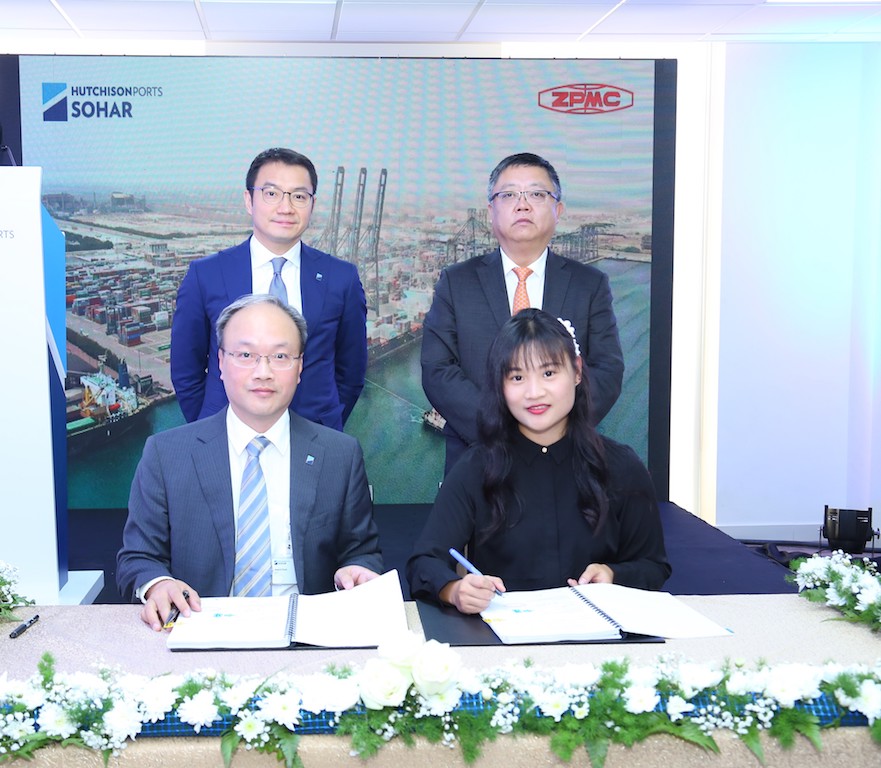 Operated as Oman International Container Terminal (OICT), Hutchison Ports Sohar is a joint venture between Hutchison Ports, the Government of Oman, Steinweg of Netherlands and several Omani Investors.
The company disclosed it is proceeding with more automation at a ceremony to mark the milestone of handling 3 million TEU since operations began in 2014, where a contract was signed with ZPMC for two new remote-controlled super post-Panamax quay cranes. The ceremony was attended by H.E. Eng. Said Hamdoon Saif Al Harthy, Undersecretary of Ports and Maritime Affairs, Ministry of Transport and Communications of Oman.
“The new cranes have an outreach of 24 rows and are capable of handling the largest vessels currently in operation. Following their delivery, Hutchison Ports Sohar will have a total of six remote-controlled super post-Panamax quay cranes and seven manually operated cranes for a total of 13 ship-to-shore cranes” Hutchison Ports Sohar said in a statement.


Hutchison is also implementing yard automation at OICT, with eight new RTGs that will be operated remotely from a centralised operations centre. All the cranes will be delivered in Q3 of 2019.
“Upon delivery of these cranes, the capacity of Terminal C will rise to 1.8 million TEU per year,” said Anacin Kum, CEO of Hutchison Ports Sohar, at the ceremony. “I’m confident that these investments will add further weight to Hutchison Ports Sohar’s standing among the world’s leading ports. Additional investments over the coming years will further contribute to the growth of the shipping industry in the region and in the Sultanate of Oman.”
The remote controlled RTGs have a lifting capacity of 41t and stack 1-over-6 high and 6+1 rows wide. ZPMC also reports another order from OICT for an additional eight RTGs, scheduled for delivery in Q2 2020.

The announcement is further evidence of Hutchison Port’s commitment to automated and remote controlled cranes, both on the quay and in the yard. Hutchinson first worked with ZPMC on a project to install three remote controlled STS cranes at Dammam, Saudi Arabia. These were installed in early 2015 and HPH has since added further remote control cranes at its terminals in Oman, Pakistan, Rotterdam and the UK.