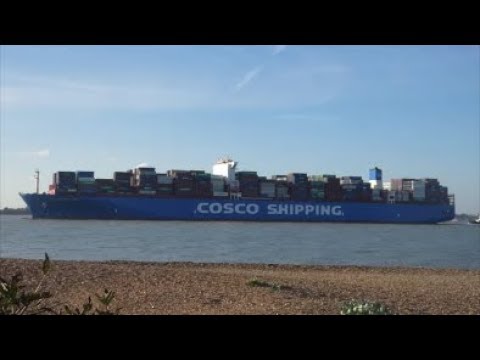 Cosco Shipping Andes, a 2018 build, enters the Port of Felixstowe. Arriving from Rotterdam with a draught of 11.9 metres, a Harwich Haven pilot boards at the Sunk Pilot Station for the inbound passage for Felixstowe's Trinity Terminal Berth 7. As she was heading inbound, the pilot requests two tugs for berthing both to meet at the Beach End and make fast on the centre leads aft and forward for a port swing off the Shotley Spit then back up to the berth. Svitzer Kent leaves the tug pontoon and heads out of the harbour to be the aft tug and make fast centre lead aft. In the meantime, Svitzer Deben was assisting the OOCL Indonesia making fast onto Felixstowe berth 8. With springs and a couple of fore and aft, the Deben is stood down by the pilot on the OOCL Indonesia so they power away and spins around to head towards the Beach End to be the forward tug. Safely rounding the Beach End and in to the harbour, the Deben makes centre lead forward and stretches their line ready to work. Tracking up the harbour, the pilot runs the engine astern then start steering to port. In the process of steering, the Kent moves onto the starboard quarter while the Deben moves out onto the port shoulder and both start winding up power to swing her around to port. Once swung, the pilot runs the engine astern to back up towards Trinity 7. Final tie up 6 and 2 with springs first fore and aft then the offshore lines.