First rehearsals to be held for Brexit 'no-deal' Dover congestion 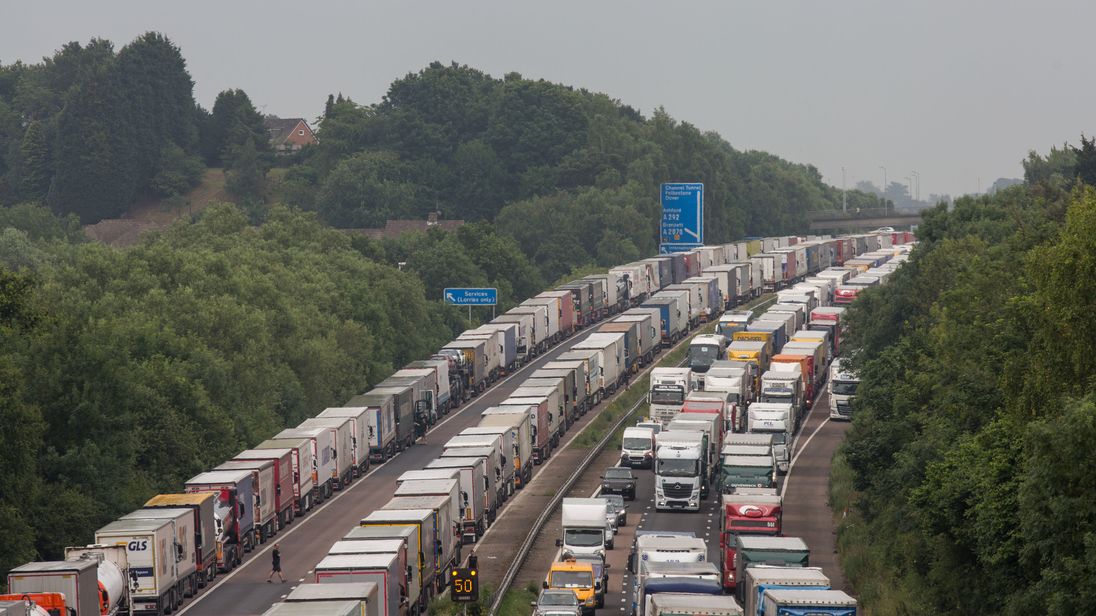 The first trial of its kind will be held for Operation Brock to test how roads could cope if there is no divorce agreement.

By Aubrey Allegretti, political reporter
The first rehearsals for how Britain's roads will cope with a "no-deal" Brexit are to be held next week.
A plan known as "Operation Brock" will be trialled, with up to 150 lorries between Manston Airport and Dover, one of the key points of entry to the UK.
The first trial of its kind will take place on Monday, with drivers already contracted by the Department for Transport.
It will form part of the government's plan to ramp up preparations for the possibility the UK leaves the EU without a deal.
:: Three months until Brexit - what we know will happen

Mrs May agreed a divorce deal with Brussels in November, but it is unclear whether MPs will vote to accept it.
The full Operation Brock proposal is to section off the entire southbound carriageway of a 13-mile stretch of the M20 in Kent.
It would be used to hold around 2,000 lorries in the event of severe cross-Channel congestion.
Sky News revealed in August how two affected Conservative-run councils warned that the "temporary solution" would in fact last "many years".

Force leaders to debate on TV

More than 130,000 have signed the petition - have you?
Kent County Council predicted a permanent alternative "will not be delivered until 2023 at the earliest".
A Department for Transport spokesperson told Sky News: "We do not want or expect a no deal scenario and continue to work hard to deliver a deal with the EU.
"However, it is the duty of a responsible government to continue to prepare for all eventualities and contingencies, including a possible no deal.

What would life in a 'no-deal' Brexit UK be like?

Borders, trade and shortages: All you need to know about a 'no-deal' scenario
"We will be testing part of Operation Brock to ensure that, if it needs to be implemented, the system is fully functional."