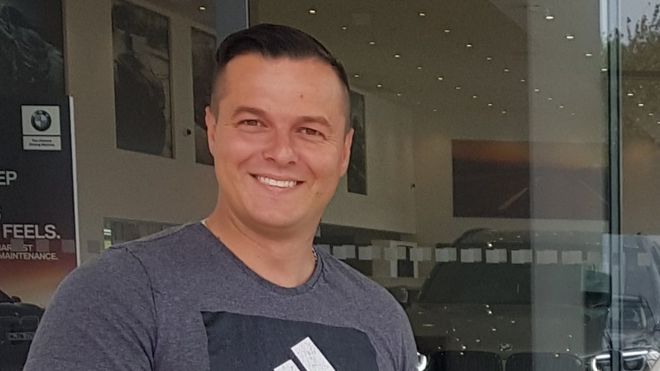 Properly-enforced safety procedures would have prevented the death of a dock worker crushed by a container, an inquest jury has concluded.
Mieczyslaw 'Mitch' Siwak, 34, from Bognor Regis, was killed at Flathouse Quay, Portsmouth, in 2017.
MMD Shipping Services, which operates the site, said it had introduced new safety measures since his death.
A jury at Portsmouth Coroner's Court, concluded Mr Siwak's death was accidental.
Jurors were previously shown CCTV recordings of the 40ft (12m) container being moved on a specialist fork-lift truck just before the accident on 25 August 2017.
The fork-lift operator, Justin Gibbons, did not raise the container above eye level so did not see Mr Siwak in front of him, the court heard.

However, the jury was told Mr Siwak, who had just started a night shift, was outside of a "safe walking zone" and had not been carrying a radio to communicate with colleagues.
Mr Gibbons said he accepted it was unsafe to drive with his view blocked but said it was common practice and had never been criticised by the company.
The Health and Safety Executive (HSE) told the inquest there was a "complete lack of supervision and control on night shifts" and practices were "routinely ignored".
The inquest jury concluded that supervision was insufficient and safety procedures were not properly enforced.
Coroner Lincoln Brookes said he was satisfied with changes put in place since Mr Siwak's death, including on-site CCTV cameras and new machines for stacking containers.
In a statement following the inquest, MMD said: "Safe working practices are in place for everyone's protection and we will always make sure this is our main concern."
The inquest heard Mr Siwak came to England from Poland in 2004 and had moved into a flat with his girlfriend shortly before his death. The family said they did not blame Mr Gibbons for what happened.
Family members told the BBC they "respect and accept" the inquest findings and were pleased changes had been made.
https://www.bbc.co.uk/news/uk-england-hampshire-46992190