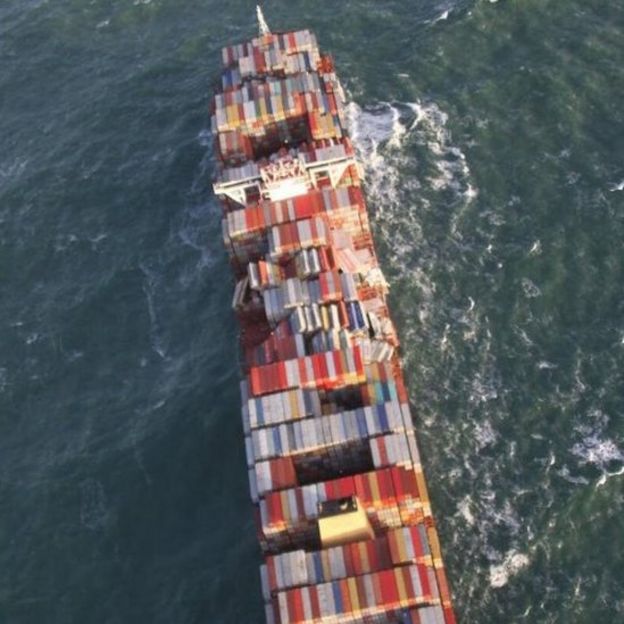 Extensive debris has washed up on islands off the Dutch north coast after some 270 containers including chemicals fell off a cargo ship in a storm.
As the extent of pollution became clear on five islands including Terschelling, coastguards searched the North Sea for missing containers.
The cargo fell off the MSC Zoe near the German island of Borkum, but the tide carried many of them to the south-west.
Initial images showed children's toys and TVs on Dutch beaches.
But officials said three missing containers carried a toxic powder of organic peroxide, and Dutch and German coastguards warned local people to steer clear of them.
One bag containing 25kg of peroxide powder was found on the island of Schiermonnikoog on Thursday, along with several containers and their contents.

What happened to the MSC Zoe?

The Panama-registered ship is described as the biggest in Europe, with a potential cargo of 19,000 containers.


As Storm Zeetje buffeted northern Germany with gale force winds late on Tuesday night, 270 containers of Zoe's cargo fell off the ship and into the Wadden Sea.
By Wednesday morning, strong tides had already swept some of the containers on to beaches on Terschelling, Vlieland and Ameland and coastguards were scouring the sea for the others.


There were fears that other shipping could be damaged by the cargo. The Geneva-based MSC company which owns the ship has asked a salvage company to use sonar equipment to help retrieve the missing containers.
Overnight into Thursday, the MSC Zoe docked at Bremerhaven. Several containers were spotted in German waters and a further 11 were seen by the Dutch coastguard floating between the islands of Ameland and Schiermonnikoog. 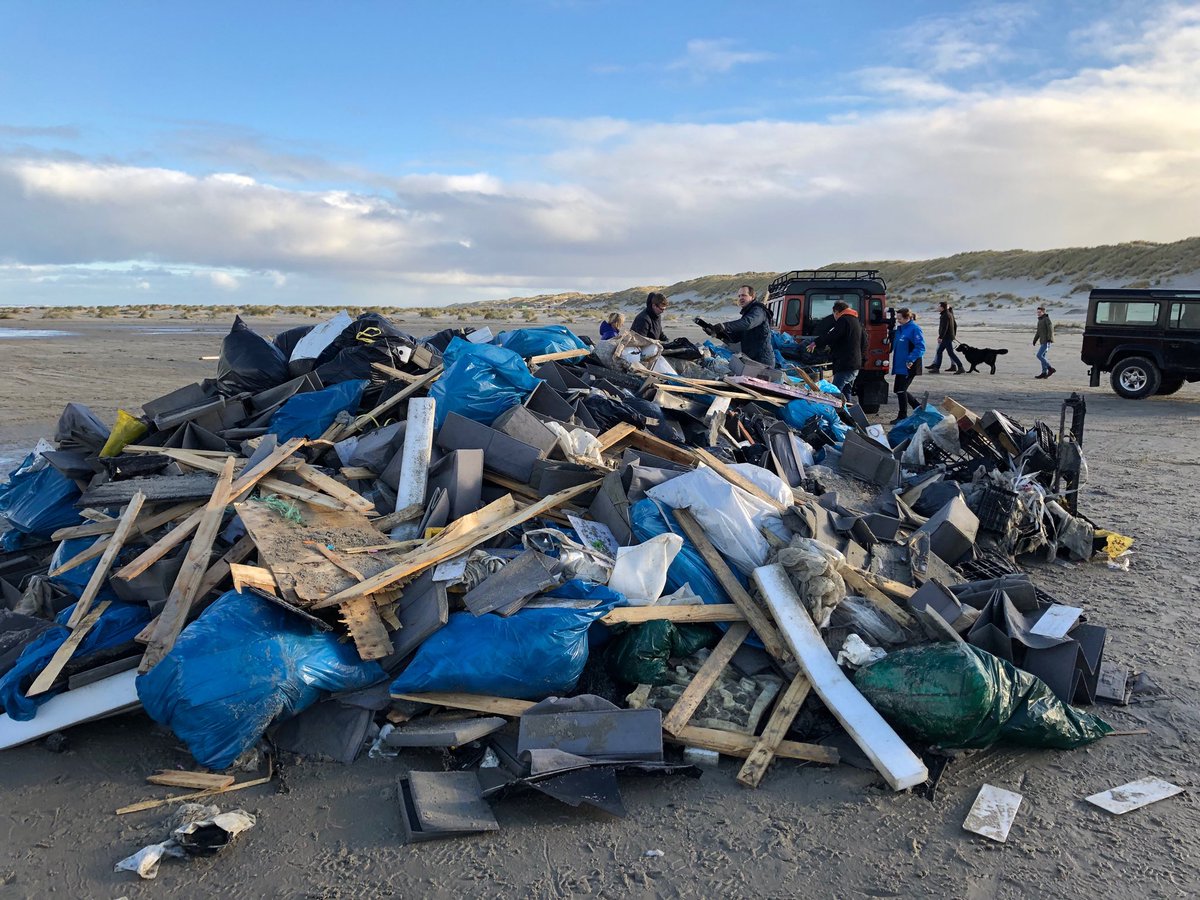 How bad is the pollution?

By Thursday five Dutch islands in the Wadden Sea had seen debris from the MSC Zoe wash up on its beaches.
On Texel, Vlieland, Terschelling, Ameland and Schiermonnikoog volunteers were helping on Thursday to clear up the mess spilt the previous day.
Skip Twitter post by @ErikScheer


Among the rubbish found on Terschelling's long, sandy beaches were shoes, bags, cushions, chairs and plastic cups. Children found pink toys among the rubbish.
Volunteers had to scoop polystyrene packaging from the dunes. 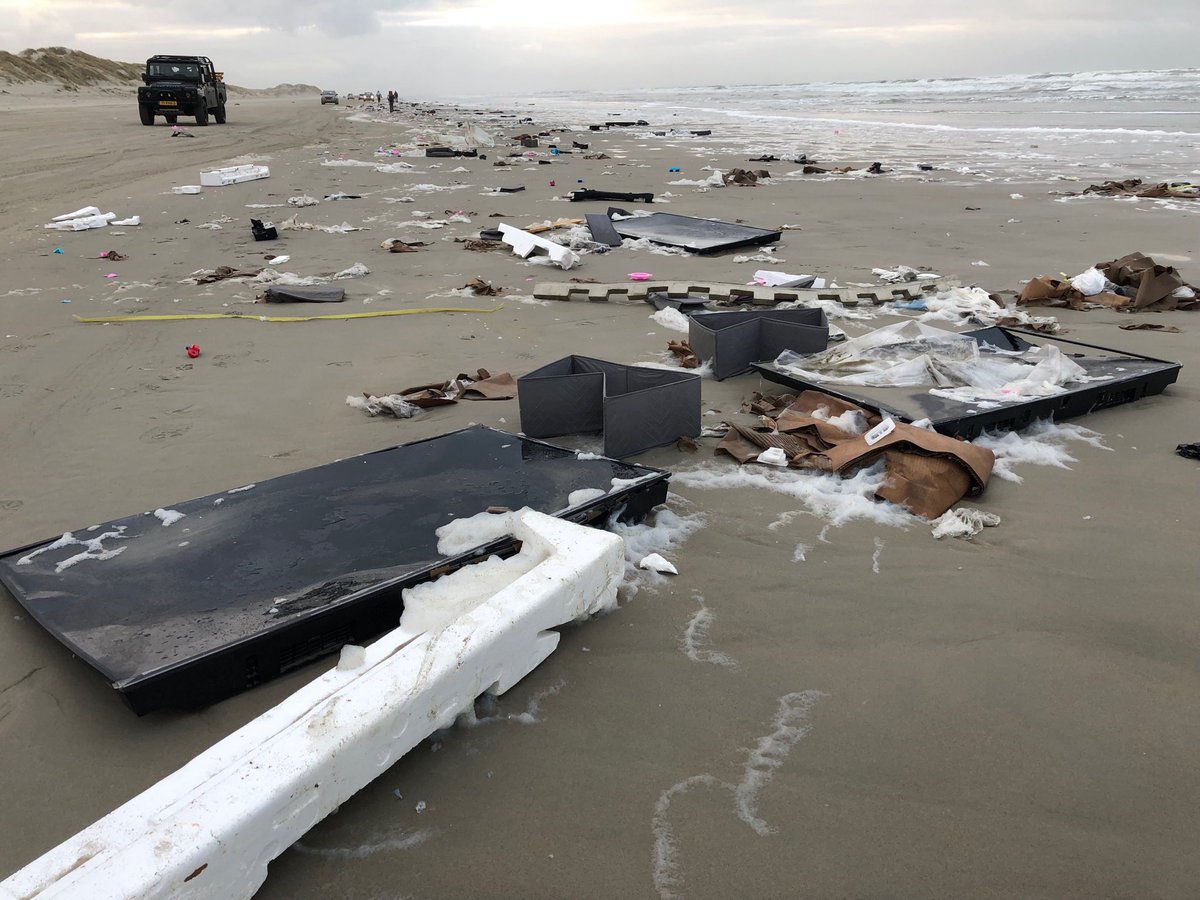 
Further to the east, on Schiermonnikoog, a trail of plastic rubbish, shoes and light bulbs was found on the beaches. "This is truly a disaster. How are we going to clean this up?" said local environmentalist Cynthia Borras. "We were prepared for an oil disaster but not this."
Skip Twitter post by @NatuuropSchier


Terschelling mayor Bert Wassink feared the clean-up could take a long time.
"We've never seen this before. It's becoming more common to see containers falling in the water but never before on this scale," he told public broadcaster NOS. 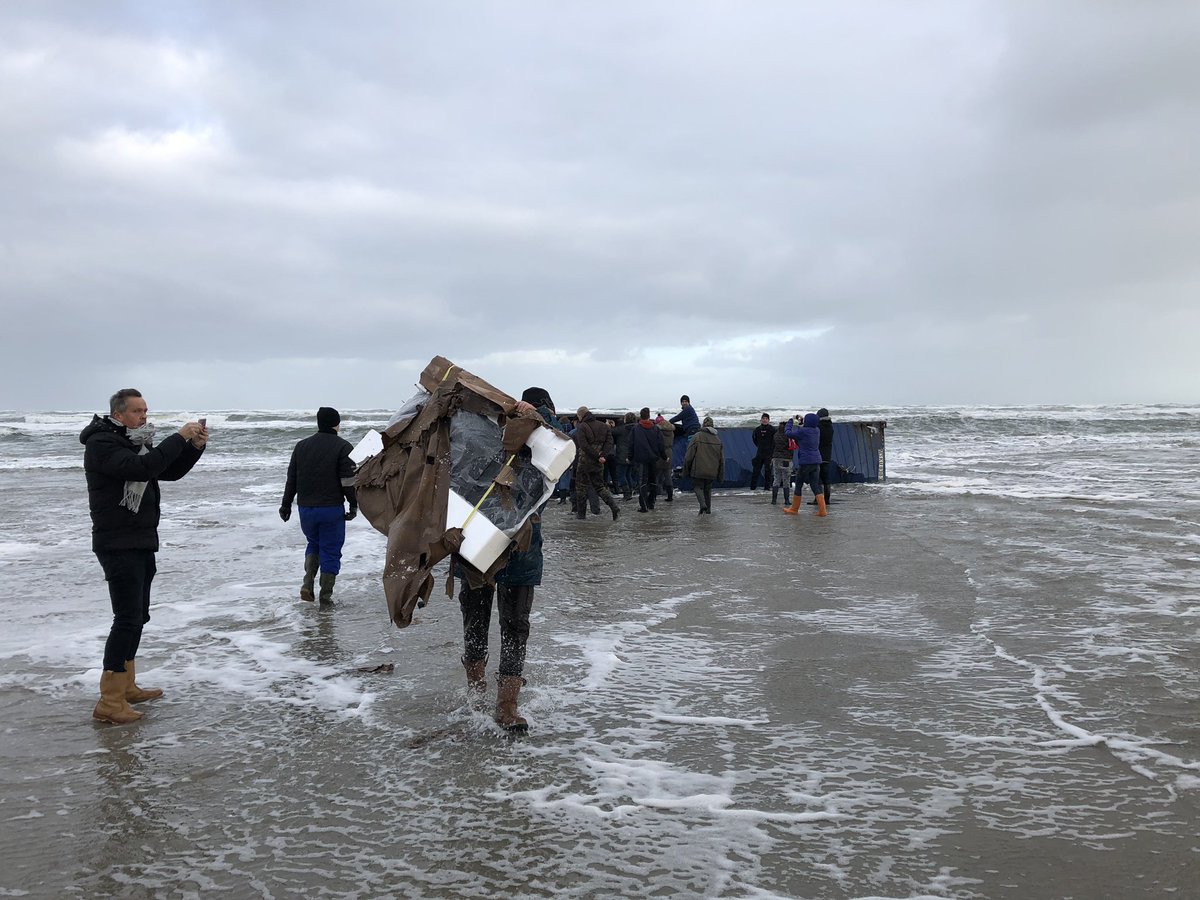 When the MSC Napoli ran aground off the south-west coast of England in 2007, 80 containers washed ashore. Police had to shut a local beach as people scoured the debris for motorbikes and other merchandise.
Police had to use old laws on scavenging that require people to return goods from the stricken ship.
Although some flat screen TVs were found in the debris on Wednesday, most concerns on the Dutch islands focused on the environmental damage to the area. 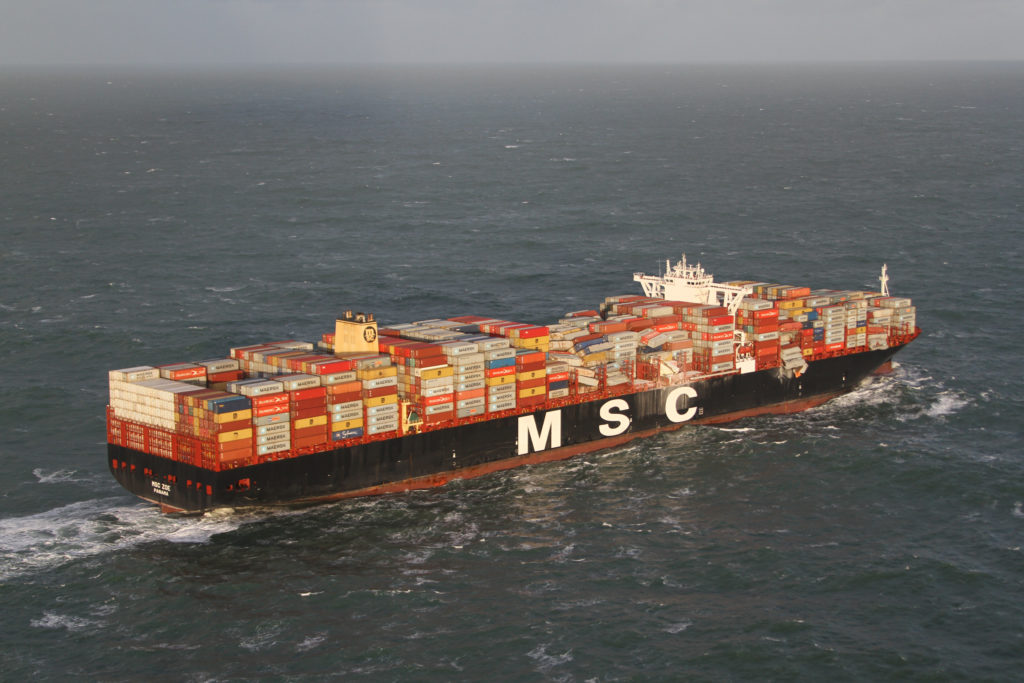 UPDATE: Some 270 containers were lost, mainly with spare parts, toys and furniture. There are though, 3 containers with dangerous organic peroxides:Yellow container number MSCU3713629, blue container number CXDU2077321 and a rust brown container number TCLU41747408. Those locating dangerous containers are asked to call 112. 21 containers were located on the shore, so far, but not the containers described above. At least 21 containers already washed ashore with contents of a number of them scattered around.
Mega container ship MSC ZOE lost 30+ containers during the night Jan 1 – Jan 2 in North sea in rough weather, north of Borkum, Germany, while en route from Sines Portugal to Bremerhaven Germany. 18 containers reportedly are located, 7 containers were washed ashore along Dutch coast in Vlieland and Terschelling area, with their content scattered around, said to be mainly car parts and toys. 3 containers contain organic peroxides, which can be dangerously reactive. They can decompose very rapidly or explosively if they are exposed to only slight heat, friction, mechanical shock or contamination with incompatible materials. Those 3 containers, as of 1200 UTC, weren’t yet located. MSC ZOE meanwhile, is slowly moving in northern direction, reportedly trying to assess the number of lost containers, and probably, other damages.
Container ship MSC ZOE, IMO 9703318, dwt 199 272, capacity 19224 TEU, built 2015, flag Panama, manager MSC.
UPDATE Jan 3 MSC Official StatementMSC has published the following statement regarding a vessel incident in the North Sea: https://www.msc.com/che/news/2019-january/msc-appoints-clean-up-company-sonar-equipped-vessMSC HIRES CLEAN-UP COMPANY, SONAR-EQUIPPED VESSELS FOR NORTH SEA SEARCH02/01/2019MSC Zoe – Silk Service – Voyage FS848WMSC Mediterranean Shipping Company has started a clean-up operation in response to a substantial spill of containers in the North Sea.
The cargo ship MSC Zoe encountered heavy weather while sailing toward Bremerhaven, Germany, on 2 January.Unfortunately, a number of the containers were damaged or lost overboard amid very difficult conditions.MSC appointed on 2 January a salvage company to coordinate the retrieval of cargo and beach clean-up operations and is also deploying specialised ships equipped with sonar to search for missing cargo at sea.MSC takes this incident very seriously, both in terms of the impact of such accidents on the natural environment and in terms of any damage to customers’ cargo. In all aspects of the clean-up MSC is collaborating with local authorities.MSC Zoe proceeded to Bremerhaven for cargo discharge operations. In the meantime, MSC is analysing the causes of the incident. MSC will ensure that customers who seek further information receive direct communications in the coming days. They are invited to contact local MSC representatives. 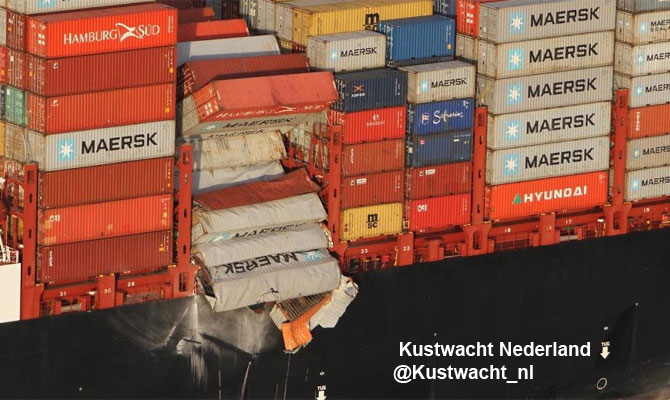 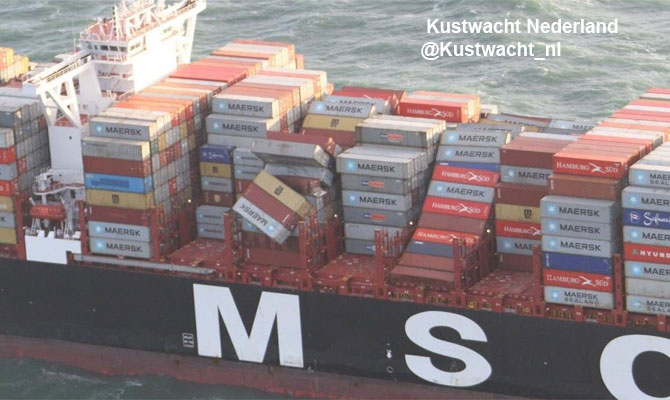 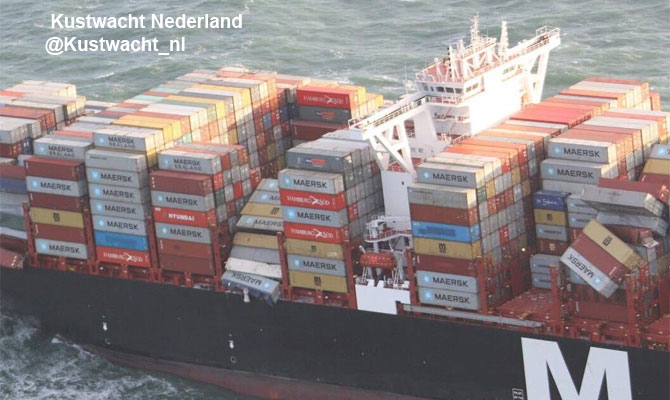 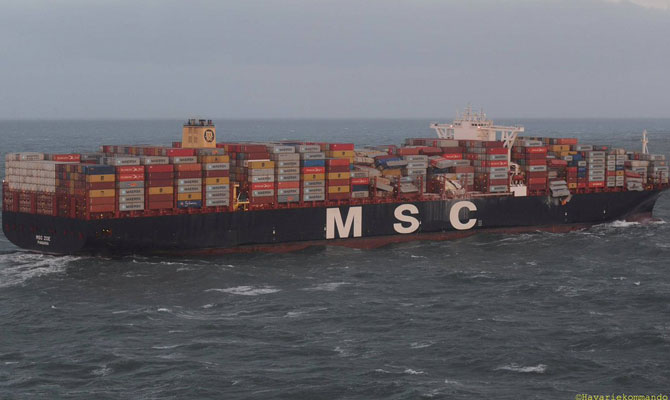 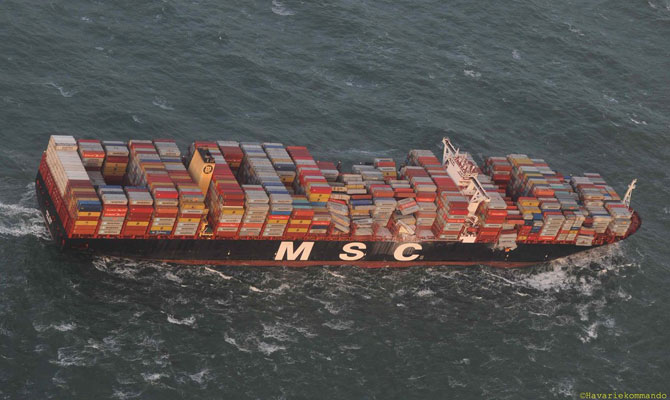 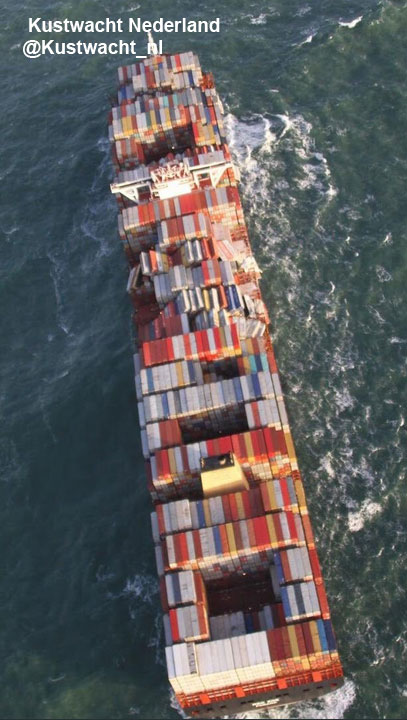 0SHARES
Authorities in Germany and the Netherlands are continuing to respond to the loss of an estimated 270 containers from the mega containership MSC ZOE in the North Sea due to stormy weather.
Since the initial incident in German waters on Tuesday night, multiple containers have started washing up on the shore on the Wadden Islands in the northern Netherlands. Meanwhile, the MSC has docked in Bremerhaven, Germany on Thursday after where crews began to inspect the rows of toppled containers.
So far, German authorities have confirmed that at least three containers carrying dangerous goods have gone overboard. At least one of those contains the hazardous substance organic peroxide. A single 25-kilo bag of the substance has washed up on the island of Schiermonnikoog, according to Dutch officials.
Of the 270 containers believed lost, officials said only a few dozen have been located. The containers are mainly filled with car parts, toys, and furniture. About two dozen containers are reported to have washed up on the shores of Vlieland, Terschelling and Ameland, part of Wadden Island chain.
The Panamanian-flagged MSC ZOE is one of the world’s largest containerships. Watchstanders with Germany’s Central Command for Maritime Emergencies received a report around 7 p.m. on January 1 that several containers had been fallen overboard from the ship as it was underway in German waters between Vlieland, Netherlands and the German Bight in the southeastern North Sea. The containers subsequently drifted towards the northern Netherlands.
Photos of the vessel shared by Dutch and German authorities show multiple rows of containers collapsed on deck both fore and aft of the ship’s superstructure.
Aircraft from both countries have been searching the waters to located any containers still floating on the surface of the water or other signs of pollution. There are also multiple vessels search the waters in the area and attempting to mark or recover any containers they come across.
A warning is out to ship’s in the area to keep a lookout for containers.
Delivered to Mediterranean Shipping Company in 2015, the 396-meter-long MSC ZOE has a capacity of 19,224 TEU.

Read Next: How Many Containers Are Really Lost At Sea Each Year?