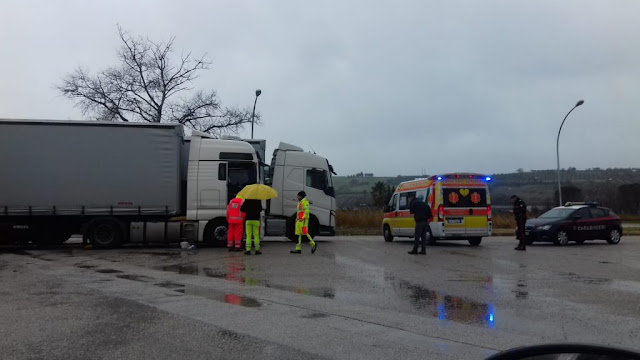 The Polish truck driver found dead in Termoli becomes the emblem of an absurd world
The national secretary of Fit-Cisl Diamante is very tough: you can not die in 2019 in the cabin of a Tir, inhumane conditions
in Termoli - Ppm - 9 January 2019
The Polish truck driver found dead in Termoli becomes the emblem of an absurd world
The drama of the 50-year-old Polish truck driver found dead by a colleague and fellow countryman two morning ago in a parking area in the industrial core of Termoli had a national echo.
"The death of the Polish truck driver is yet another white death, due in this case to the inhumane conditions in which these workers are forced", says Maurizio Diamante, national secretary of Fit-Cisl, about the 50-year-old Polish truck driver found dead in his half in Termoli, presumably because of the exhalations of the camp stove he used to cook.
"In 2019 we still tolerate - continues Diamante - that truck drivers sleep and eat in their midst inside the parking areas. One can easily imagine that these workers do not rest at all and therefore get tired of the wheel, with consequent risks for themselves and for other road users. We ask for more controls by the competent authorities to verify the security conditions in which these workers operate and to sanction, if necessary, behavior that does not comply with the rules.
We also intend to meet employer associations to find a solution to this widespread problem.
The National Secretary concludes: "We have also done well to say no, together with ETF, the European Federation of Transport Workers to which we belong, to the Mobility package, which must be approved by the European Parliament by January and which increases the driving time and not only the drivers of rest, but also long-distance bus drivers, are decreasing.
Against this provision and to request better working conditions for these workers, we have called a unit strike of 24 hours for next Monday and we have in mind further protest actions ».
On the corpse of the 50-year-old the Procura di Larino has ordered an autopsy to clarify any doubts about the causes of death, since it could also be an illness.