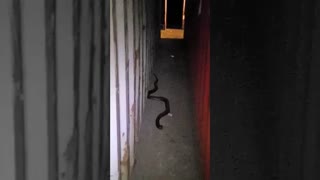 “Listen! It’s slowly coming this way!” warns one docker as he continues to record the snake’s progress on his cellphone. “Leave the light on, it’s becoming hypnotized,” suggests another worker.
The dock workers are talking about a cobra that was found inside one of the cargo terminals at Algeciras port, in the province of Cádiz. The appearance of the dangerous reptile prompted port authorities to shut down part of a container yard on Tuesday night. The area has since gone back to normal after officers from Seprona, the Civil Guard’s nature protection service, managed to capture the snake on Wednesday morning.


The primary hypothesis is that the cobra came to Spain from Africa  aboard a container ship
Although a veterinarian has yet to confirm it, the reptile is “almost certainly” a black-necked spitting cobra (Naja nigricollis), according to the Civil Guard. The specimen measures between one-and-a-half and two meters, and has already been taken to the zoo in Castellar. Authorities suspect that it arrived on one of the numerous merchant ships that come in and out of Algeciras, one of the busiest shipping hubs in Europe. Last year this port handled 107 million tons of cargo, a 5% rise from 2017.

It was around 9.30pm on Tuesday when the dockers who work the night shift in the container area of APM Terminals discovered the reptile, according to a worker who was there that night. The cobra was found in an area where the cargo is left awaiting transfer. In a narrow space sandwiched between numerous containers, the dockers managed to film the specimen as it tried to hide under one of the large crates. The video did not take long to go viral among other port workers and the local press in Algeciras.


It is considered an aggressive species and its bite is venomous
The workers notified APMT managers of the cobra’s presence, and only a few minutes went by before action was taken. “The company sent out an email about the danger the snake presented and the area was closed until officers from Seprona arrived,” said a docker working the night shift that evening. According to local newspaper Europa Sur, the finding was made in concourse 8B of the terminal. AMPT has not issued any statements.
The black-necked spitting cobra is a species from central Africa, and it usually lives in the savanna or in semi-arid zones, although it can also be found in tropical and subtropical areas. It is considered an aggressive species and its bite is venomous, although the mortality rate is not high. Despite its surprise appearance at the port, there have been no injuries in Algeciras.
Although running into a venomous snake is not an everyday occurrence, the dockers at Algeciras port are used to dealing with all kinds of complicated and dangerous situations. In addition to the high rate of work-related accidents, the port workers are used to finding “spiders, rats and many bugs in the ships’ holds,” explains a port worker. “Many times we are not even aware of the danger.”