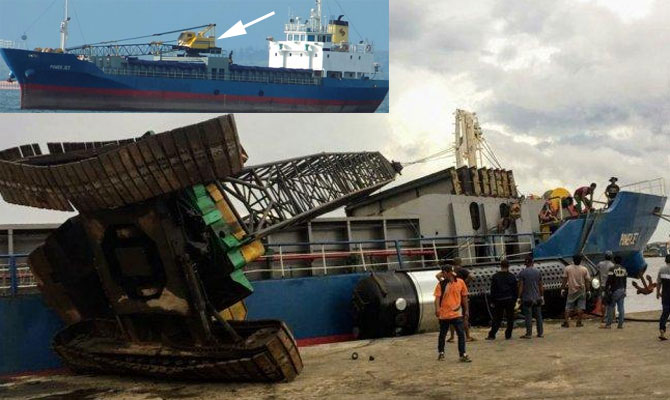 Mobile crane crashed onto cargo ship POWER JET, while offloading a boiler for palm oil factory, in the afternoon Feb 4. POWER JET was berthed at Dwikora Port, Pontianak, western Kalimantan, Indonesia. Reportedly, operator of crane wasn’t injured, though it took some time to get him out. It is said, that crane collapsed not because of boiler being too heavy to handle, but because it wasn’t properly unlashed. It is not clear if collapsed crane was ship’s crane, or port’s crane. Operator was a local, port’s worker.General cargo ship POWER JET, IMO 8704389, dwt 700, built 1987, flag Niue, manager SELAT INSPIRASI SDN BHD, Malaysia (EQUASIS).


// Mikhail Voytenko
My name is Mikhail Voytenko, I’m Russian, professional merchant marine navigator, by education and former experience. I own and run Maritime Bulletin website for more than 10 years. I've been involved in solving a number of piracy hijack cases, including the hijack of ro-ro FAINA, loaded with tanks. It was me who made public, and unravel, freighter ARCTIC SEA mystery. I've been also closely involved in a number of maritime disaster, one of them being MSC FLAMINIA major fire.