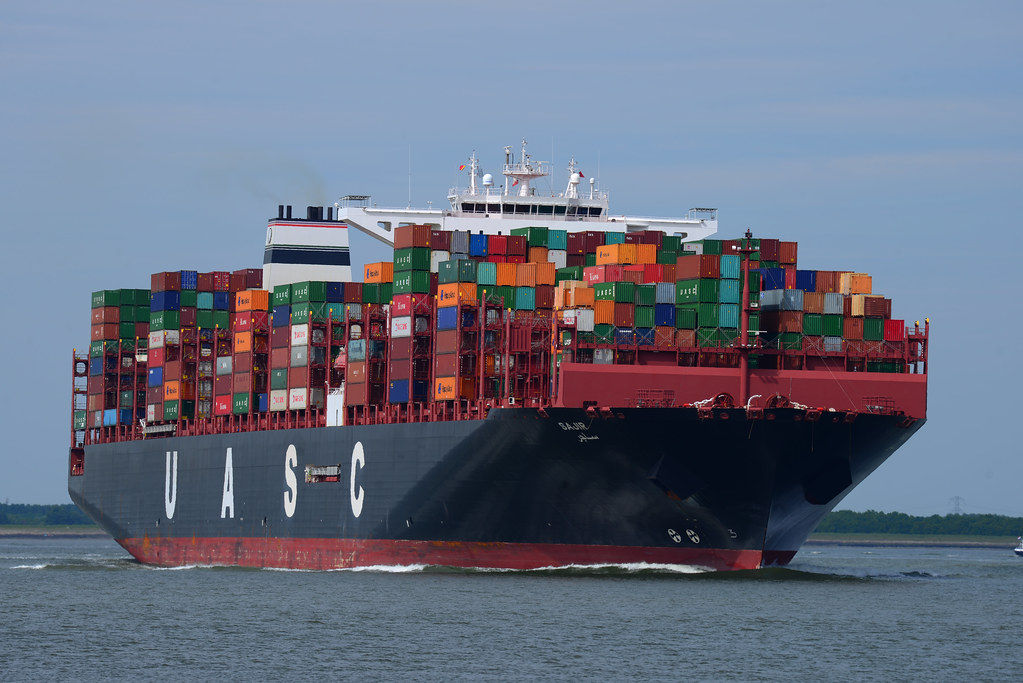 
Retrofitting of the 15,000 TEU vessel “Sajir” to use LNG propulsion / Pilot project paves the way for converting large ships to LNG / 15 to 30 percent less CO2 emissions possible
Hapag-Lloyd will retrofit its 15,000 TEU ship “Sajir” to operate using liquified natural gas (LNG). In future, the engine system will be able to function using either of two types of fuel: LNG or low-sulphur fuel oil (LSFO). The contract for the retrofitting was signed at the end of last week with Hudong ZHONGHUA Shipbuilding (Group) Co., LTD. The conversion will be carried out in the Shanghai-based shipyard Huarun Dadong Dockyard Co., Ltd.
During its time in the shipyard, the ship’s fuel system and its existing heavy fuel oil-burning engine will be converted into a dual fuel engine. The plan will be to operate the vessel using LNG, but to also be able to use low-sulphur fuel oil (LSFO) as a backup. “By converting the ‘Sajir’, we will be the first shipping company in the world to retrofit a container ship of this size to LNG propulsion”, says Richard von Berlepsch, Managing Director Fleet Management at Hapag-Lloyd. “By carrying out this unprecedented pilot, we hope to learn for the future and to pave the way for large ships to be retrofitted to use this alternative fuel.”

Using LNG in the shipping industry could potentially reduce CO2 emissions by 15 to 30 percent and sulphur dioxide and particulate matter by more than 90 percent.
The “Sajir” is one of the 17 vessels in Hapag-Lloyd’s fleet that were originally designed to be LNG-ready. Its 16 sister ships are also technically prepared for retrofitting. With the conversion of the “Sajir”, Hapag-Lloyd will be implementing a technological option to reduce the environmental impact of large vessels.
Press contactsNils.Haupt@hlag.com +49 40 3001 2263Johanna.Stroex@hlag.com +49 40 3001 3079
About Hapag-Lloyd
With a fleet of 222 modern container ships and a total transport capacity of 1.6 million TEU, Hapag-Lloyd is one of the world's leading liner shipping companies. The Company has around 12,000 employees and 394 offices in 127 countries. Hapag-Lloyd has a container capacity of approximately 2.6 million TEU – including one of the largest and most modern fleets of reefer containers. A total of 120 liner services worldwide ensure fast and reliable connections between more than 600 ports on all the continents. Hapag-Lloyd is one of the leading operators in the Transatlantic, Middle East, Latin America and Intra-America trades.