The Orwell Bridge will be closed from 7am. Picture: LUCY TAYLOR

Drivers have been urged to consider other routes this morning after Highways England closed the Orwell Bridge in both directions due to the “very strong winds” from Storm Gareth.

Highways England told drivers that the bridge on the A14 in Suffolk will be closed from 7am for safety reasons, due to high winds, and will remain closed through this morning’s rush hour.
However, it wasn’t until shortly after 8am that the road was finally closed in both directions. 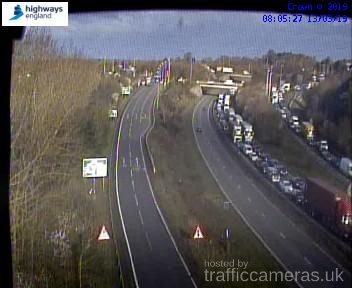 The organisation will continue to monitor wind speeds closely before making a decision about when to reopen the A14 bridge, based on the safety of road users as Storm Gareth passes through the East of England.
The bridge is expected to re-open this afternoon as soon as it is safe to do so, and Highways England will keep drivers informed about when that is.
Once the Orwell Bridge is closed, the diversion route is via the A1156, A1189 and A1214 through Ipswich.
High winds are to be expected across the county throughout this morning.
A spokesman for Weatherquest said: “Today is going to be a particularly windy day.
“It’s probably going to be a windier day than yesterday, which also had strong winds.
“The strongest gales will start around lunchtime with windspeeds of up to 60mph.
“It’s going to be a pretty cloudy morning with the chance of a few bright spells across the county but there’s a good chance of scattered showers.”
Temperatures are expected to reach between 9C and 11C, getting warmer and brighter into the afternoon.
Storm Gareth, affecting much of the UK, is expected to last until Friday.
Stay with us for travel updates as Storm Gareth winds continue to cause disruption.

If your heading towards the #OrwellBridge #A14 we will be closing it in both directions from approximately 0700hrs due to very strong winds in the area. We will be closely monitoring the weather through out the morning. Please consider alternative routes.

Tweet
A14 Orwell Bridge
Road closed, strong Winds, queueing Traffic, congestion to.
Road closed and queueing traffic due to strong winds on A14 Orwell Bridge Eastbound between J56 A137 (Wherstead Interchange) and J57 A1189 Nacton Road (Nacton Interchange). Congestion to J58 (A12 Seven Hills interchange). The bridge is now closed Eastbound. Westbound is likely to be shut imminently, although cameras still show traffic getting by for the moment. Storm Gareth is expected to bring st