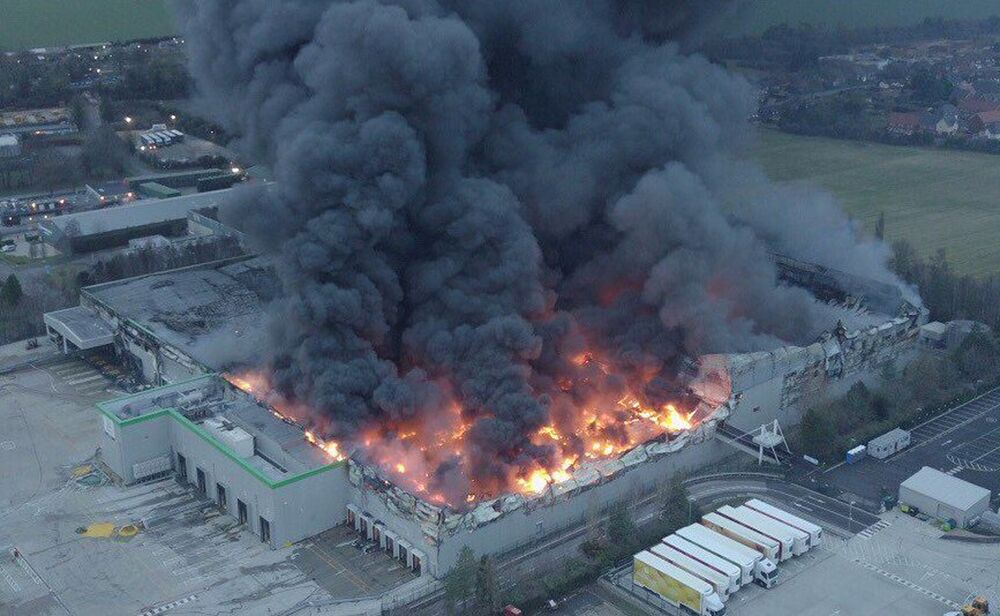 The Andover fire brigade was alerted at 2.34 a.m. About 2 miles across town, a fire had broken out in the early hours of Feb. 5 at a state-of-the-art Ocado Group Plc warehouse. Within minutes, firefighters were tackling a blaze that eventually reduced the five-floor facility in southern England to a tangle of smoking metal.
Later that day, Ocado executives presented quarterly earnings in a conference room in London. Chief Executive Officer Tim Steiner touted the virtues of the company’s robotic warehouses, laying out plans for Andover. He didn’t mention the fire, which raged on for three more days.
For Ocado, the blaze was a reminder that the march of automation has a sting in the tail. Machines may be efficient and safe workers, but their environment isn’t designed for human intervention when disaster strikes. The financial repercussions can also be worse if a retailer’s risk is concentrated in a few expensive warehouses rather than hundreds of stores.
“There is a physical, configurational challenge about some of these places if something goes wrong,” said Jonathan Reynolds, academic director of the Oxford Institute of Retail Management. “There’s a gradual growth in understanding the implications of automation.”
Ocado is not the only e-commerce provider to suffer from such incidents. Fashion brand Asos Plc has had three warehouse fires since 2005.

The online grocer said on Feb. 5 that the fire started in what is called the ambient grid, where food is stored at room temperature. A spokeswoman declined to comment further on the cause.
The blaze began high in the warehouse and was so difficult to reach that firefighters had to cut holes in the roof, according to Neil Odin, chief officer at Hampshire Fire and Rescue Service. A sprinkler system only contained the fire in its early stages. It took more than 200 people to quell the flames.
The 240,000 square-foot Andover facility was the first of its kind when it was built in 2016 and was designed to encourage other retailers to partner with Ocado to improve their online deliveries. The site filled about 10 percent of Ocado’s orders and revenue growth is expected to suffer until capacity can be increased elsewhere.
Ocado has secured lucrative licensing deals with Kroger Co. in the U.S., Casino Guichard-Perrachon SA in France and other grocers thanks to the technology. Kroger is pressing on with its tie-up, naming two locationsfor new facilities with the U.K. company’s software. Last week Ocado added a 750 million-pound (about $1 billion) investment from Marks & Spencer Group Plc to form a grocery-delivery joint venture.
Ocado has shared information about the cause of the fire with partners like Kroger and M&S, and the companies aren’t deterred, Steiner told reporters at a London briefing last week.

“We are not concerned that there is a fundamental issue with the design,” the CEO said. “Will we learn lessons from it? Of course we will. We always learn lessons from our mistakes. Can we improve things and make sure things are safer in the future? Yes. But there is no issue there.”
The burned warehouse featured 17 stacks of crates and a grid at the top where more than 600 robots fill orders in seconds. That’s about the same size as the unit’s workforce of humans, some of whom operate below the network, bagging orders.
Automated warehouses are generally taller and narrower than more traditional facilities because there’s no need for people to move between floors and it saves on rent, according to George Lawrie, an analyst at Forrester Research Inc. who advises retailers on technology to make their businesses more competitive.
The 45 million-pound Andover facility was on the outskirts of town, but in the future warehouses will be closer to city centers for quicker distribution, he said. Ocado is already testing a service to handle one-hour deliveries from smaller urban sites.
“The fire service needs to think ahead about change and how risk develops,” said Matt Wrack, general secretary of the U.K. Fire Brigades Union. “There’s a big debate about automation which suggests these sorts of premises are going to grow in number.’’


Automated warehouses aren’t new. Amazon.com Inc. uses more than 100,000 robots in its distribution centers worldwide. But Ocado has advanced the concept, and it sees itself as more of a tech company than a grocer. It has created its own infrastructure, technology and software, including robotic arms that can pick delicate items such as fruit and vegetables. The tie-up with M&S will allow it to focus even more on technology.
Fire damage at online retailers’ sites can be costly. Asos halteddistribution for more than a month in 2005 after an oil depot explosion set one of its facilities alight in southern England. Another blaze in 2014 stopped orders from a different U.K. site, costing it as much as 30 million pounds in lost sales. Police considered the cause of the second fire to be arson.
A fire at an Asos facility near Berlin in 2017 ruined inventory worth about 6 million pounds, though none of the technology or structure was affected. A spokesman declined to comment on these fires.

Machines are increasingly creeping into retail as consumers demand convenience, cheap prices and quick delivery. Swedish apparel chain Hennes & Mauritz AB automated a logistics center in Poland last year to increase capacity and speed up deliveries across Europe. Inditex SA’s Zara has even used robotics to place garments straight into shoppers’ hands in its flagship London store.
Robots may eventually become so advanced that they can douse flames themselves, according to Lawrie at Forrester.
“If they are sufficiently smart to be able to pick the produce, I’m sure they are quite smart enough to fight a fire,” he said.
— With assistance by Will Mathis, Jeremy Kahn, and Anna Molin
https://www.bloomberg.com/news/articles/2019-03-03/robot-workers-can-t-go-on-strike-but-they-can-go-up-in-flames?
Posted by Felixstowe Dockers