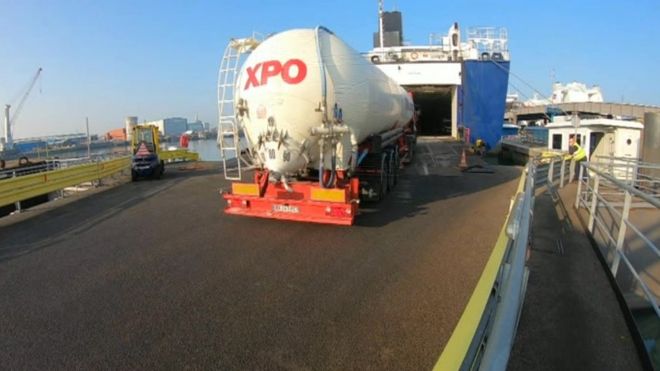 The first of 20 new weekly cross-Channel ferry crossings has begun as part of a £46.6m taxpayer-funded no-deal Brexit contract.
The Brittany Ferries' ship departed Portsmouth for Le Havre at 08:00 GMT.
The contract was signed to start on 29 March and the firm said the delay to Brexit came too late for it to cancel the sailings.
Thousands of passengers had their bookings amended in January to accommodate the extra crossings.
The new crossings are spread across Brittany Ferries' Portsmouth-Le Harve, Poole-Cherbourg and Plymouth-Roscoff routes.

The government will not use the freight capacity it reserved for at least the next two weeks, which is being offered for sale on the open market.
Haulier Clive Mills, from Euro2Go, criticised the contract.
"The new ferries are going to do us no favours at all because the hold-up will be clearing paperwork not getting on a boat," he said.
"This money the government has ploughed into Brittany Ferries would have been better spent... on the people we need in place to clear customs."
In December, the government announced it was awarding £102.9m to three suppliers to provide extra capacity to ease congestion at Dover if the UK leaves the European Union without a deal.

The controversial process put in place by Chris Grayling's Department for Transport (DfT) has already seen a row over the collapse of the deal with Seaborne Freight, which had no ferries, and a £33m out-of-court settlement with Eurotunnel.
The deals are aimed at securing the supply of goods such as medicines for humans and animals, vaccines, infant milk formula, organs for transplants and chemicals for the energy industry.
A government spokeswoman said it was "only right that we push on with contingency measures".
She added: "Due to the agreed extension until 12 April, tickets for the first two weeks have been released for sale on the open market, which will minimise costs for the taxpayer."