Heron Hunter has a berth change as she enters the Harwich Haven for Felixstowe 3. 25th March 2019 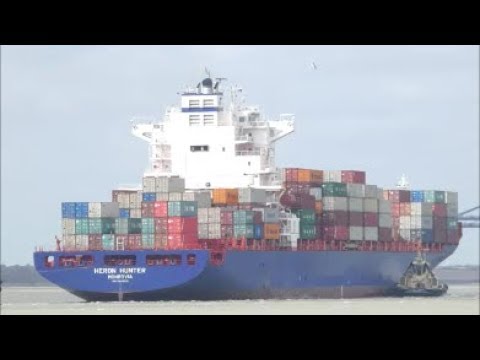 The Harwich Haven pilot which was onboard the outbound Cosco Shipping Denali disembarks onto the Pilot launch St Brendan to transfer onto the Heron Hunter. Once onboard, the pilot radios Harwich VTS to say they were inbound maximum draught of 10.4 metres from Salerno and believed they were planned port side to Trinity 5. VTS replies that there was a berth change and now planned port side to Trinity 3. The pilot asks for the height of tide and wind on the Landguard gauge. The pilot requires two tugs for berthing, the first outside the harbour in one hour make fast centre lead aft and the second also outside to make fast starboard shoulder for a starboard swing for the berth. Svitzer Kent heads out of the harbour to be the aft tug and quickly makes fast. Svitzer Shotley heads towards the Beach End to make fast. As the Heron Hunter approaches the harbour, a coaster boards a pilot at the Cork Station inbound for Ipswich. The coaster is the first to enter the harbour with the Heron Hunter about 5-10 minutes later....