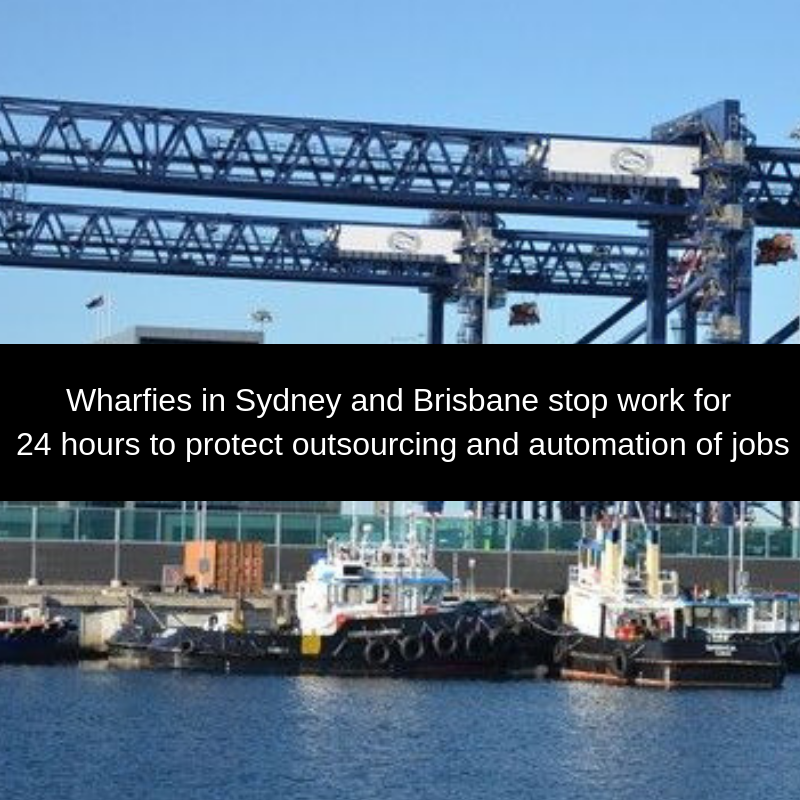 Wharfies in Sydney and Brisbane will walk off the job for 24 hours today (Friday) to protest Hutchison Ports ongoing refusal to move away from outsourcing of jobs and overseas remote controlling of already semi-automated equipment.

“Outsourcing our jobs for greater profit and remote controlling to workers that may be paid $2 per hour will continue to be challenged by the workforce and their union,” Maritime Union of Australia Assistant National Secretary Warren Smith said.
“Wharfies work is wharfies work and we will resist every effort to give that work to others regardless of how much or little they are paid, we suspect little in this case.”
The union has had several instances and clear cases of harassment identified in it’s Brisbane operation drawing scathing criticism from the Queensland Branch.

MUA QLD Assistant Branch Secretary Paul Petersen said: “This is not a fight about wages, this is a fight for basic conditions, job security and not having our jobs outsourced overseas. It’s about automation and not being replaced by a robot and most importantly it’s about being able to work in a safe environment free from harassment.”

The situation in Sydney has seen the constant and vigilant action of the MUA Sydney Branch save lives in an environment where safety is not treated with the priority it should be by Hutchison Ports.

MUA Sydney Branch Secretary Paul McAleer said: “Hutchison’s notorious anti-union agenda around the world is attempting to sink the wages and conditions, job security, and health and safety of wharfies in Sydney and Brisbane.
“Their plan to be the budget airways of Australian stevedores seeks to undermine decades of work to create jobs with justice and dignity, all so they can return more profits to one of the richest men on earth.

“The MUA will fight this billionaire for as long as it takes to win an Enterprise Agreement that our members can be proud of.”

“Hutchison have not picked up the phone once to try and schedule meetings despite us having tried to do so,” he said.
“They tell blatant anti-union lies to their workforce to foster division and discontent.

“It’s the same tactics we see from this company all around the world and we’re a wake up to it and will fight it.”

MUA wharfies at Hutchison ports in Sydney and Brisbane are on strike today over the company’s ongoing refusal to move away from outsourcing and offshoring of jobs. Solidarity comrades! #ITFDockers #WeAreITF