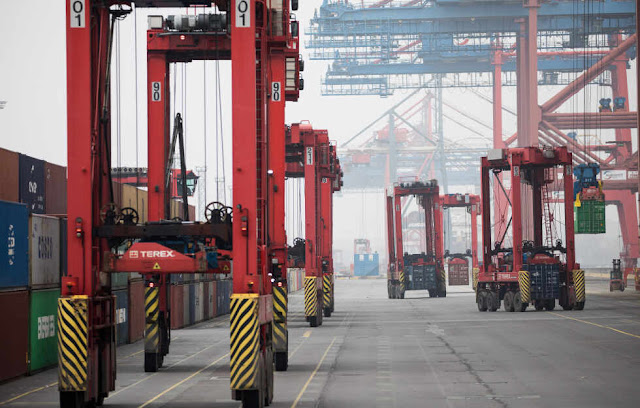 AT THE HAMBURG CONTAINER TERMINAL AT BURCHARDKAI THERE WAS A TERRIBLE ACCIDENT WITH A HUGE STRADDLE CARRIER.

Hamburg - The Hamburg fire brigade had to rescue a heavily injured dock worker from an extremely rare and highly dangerous accident situation at the container terminal on Burchardkai during the night on Friday. What happened?


Over 15 meters high straddle carriers, which are also called "Van Carrier", are on the way in loading and unloading in a Hamburg terminal in the port on the way (symbol picture).
As the fire department announced, it reached shortly after midnight an emergency call from the Hamburg Port and Warehouse Company (HHLA).
A so-called "Van Carrier" had been overturned on the grounds of the enormous port terminal - a large transport vehicle between 10 and 15 meters high for reloading containers weighing several tons.
The driver, who was working in his cabin, fell over with the device and was badly trapped in his cabin.
The alarmed rescue workers moved therefore to a large employment in the port with over 30 emergency services and heavy equipment, including fire-fighting crane from.
On the ground, they had a terrible picture: The meter-high Van Carrier (in German straddle carrier) was dumped in a stack of empty 40-foot container.
HHLA's panicky hurried employees had freed the trapped driver from the pulpit of the van carrier. 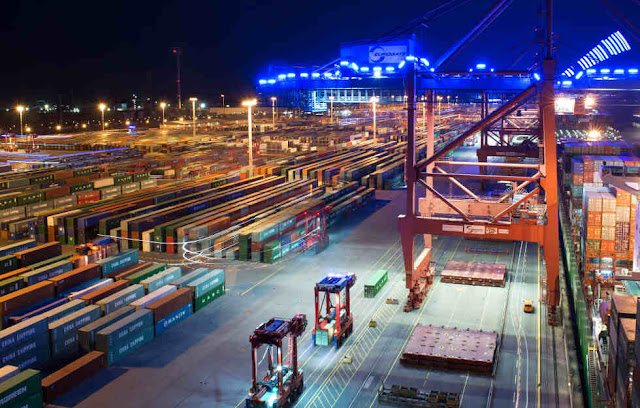 Numerous "van carriers" travel at night with blue fluorescent tubes in the container terminal Eurogate in Hamburg.
The man was immediately given medical attention and was taken to a nearby clinic for suspected head and spine injuries.
A colleague of the injured dock worker, who was an eyewitness of the incident, was so shocked by the violent incident that he also came to hospital with circulatory
problems. The port vehicle was subsequently recovered by the police and the accident site secured.
A spokesman for the fire department said on request from TAG24 that accidents like this fortunately only rarely happened.
Why the huge straddle carrier that transports containers from ships to their warehouses and loading stations in port (or vice versa), could not be clarified so far.
So far, the police have not been able to give any feedback on the cause of the accident, the investigations are still ongoing. 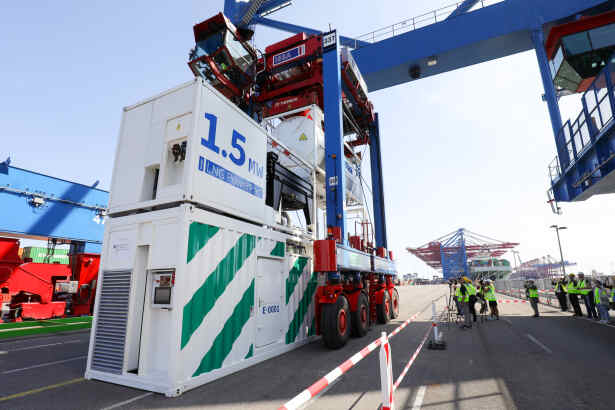 A container transport vehicle (van carrier) demonstrates what it can do on the HHLA terminal Burchardkai (symbol image).
Update, 21.28 clock: Elevation corrected
As it turns out in the meantime, the container transporter concerned was at most 15 meters high and not more than 50 meters high. The information was corrected in the article.

President at The Blueoceana Company, Inc.

Unfortunately, the article contains very little more in the way of descriptive information.
Those members of the "Longshore Safety" page at Hamburg with knowledge of this accident and/or the status of the operator, are invited to communicate in a comment or within a private message.
https://www.tag24.de/…/unfall-schock-am-containerterminal-f…
on May 20, 2019