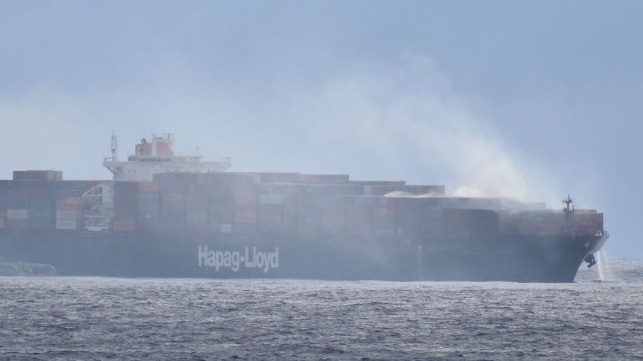 BY MAREX
Japanese carrier Ocean Network Express (ONE) is encouraging customers with cargo aboard the fire-damaged container ship Yantian Express to make sure that they pay their general average obligations. According to the carrier, though the payment deadline has long since expired, "General Average and Salvage security has still not been posted for about one third" of the containers that survived the fire.
The vessel's operator, Hapag-Lloyd, declared general average due to the damage caused by the container fire aboard the Express in January. According to the line's general average surveyor, 202 containers were suspected to be a total loss (and hundreds more required inspection).
All cargo owners who wish to recover surviving containers have to post salvage and general average guarantees. The salvage guarantee provides for cargo owners' liability up to a maximum of 32.5 percent of the CIF value of the cargo. For uninsured cargoes, the general average bond requires a cash deposit of 28 percent of the cargo value (or the equivalent provided by the cargo's insurer).
Though some portion may be eventually refunded, the total deposit adds up to more than 60 percent of the value of the cargo - and some cargo interests appear to be moving slowly on payment.
"In order to assist progress of vessel operational proceedings and salvage company approval, we again encourage all cargo interests to immediately provide the requested General Average and Salvage security in order to allow the containers to be delivered," said ONE.


The Express is still in Freeport, Bahamas, where she diverted for refuge and repairs. Dependent on class approval and refitting of hatch covers, the Express is likely to depart within several weeks, with the remaining cargo onboard. She will proceed to her original destination of Halifax, Nova Scotia, where she will offload the remaining boxes.