Trinity House seafarers, engaged in their first pay dispute in more than 500 years, will be holding a protest in Harwich, Essex, at 13.00 tomorrow (Wednesday 24 April).
The seafarers, who have a key role in maintaining safety in British waters, will be protesting at Trinity House at the Quay, Harwich.
The seafarers, members of Unite, Britain and Ireland’s largest union, have already taken a day’s strike action earlier this month in their dispute over seven years of below inflation pay rises, or no increases at all.
Unite has 34 members working on three lighthouse tenders - Galatea and Alert based in Harwich, Essex and the Patricia whose home port is Swansea, south Wales. They are employed by Trinity House Lighthouse Services (Corporation of Trinity House Deptford Strond). 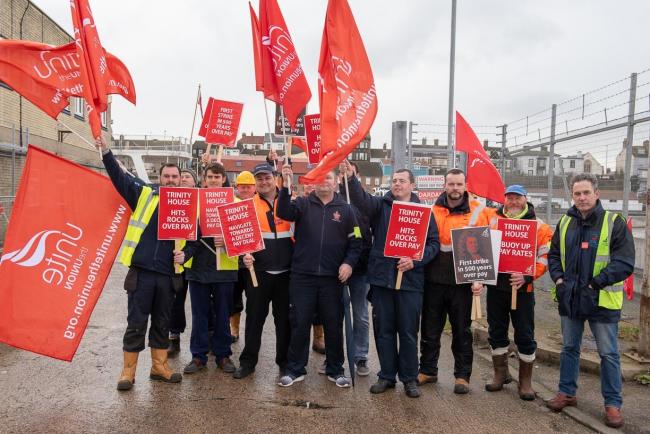 Unite regional officer Miles Hubbard said: “Tomorrow’s protest at 13.00 demonstrates the resolve of our members to seek pay justice and not put up with miserly rates of pay that they have endured over the last seven years.
“The seafarers are dedicated professionals firmly committed to safety in the navigation of the sea lanes around the British Isles.
“However, the fact that they staged the first strike in Trinity House’ 505-year-old history on 3 April underlines their strength of feeling on the pay issue.
“In 2017, the employer imposed a one per cent pay increase which Unite members voted overwhelmingly to reject. Talks, including a pay increase for the year starting April 2018, continued, but eventually run aground.

“Unless there is substantial movement by Trinity House management, more industrial action is on the cards during the spring and early summer.”
Unite’s members voted by 90 per cent for strike action  - it is the first union strike since The Corporation of Trinity House was incorporated by Royal Charter in 1514 to regulate pilotage on the River Thames and provide for aged mariners.
Unite said that the lighthouse tenders assist in maintaining almost 11,000 aids to navigation – currently they are involved in a survey of lighting on North Sea oil rigs.
ENDS

Notes to editors:
The Trinity House website  says: ‘Our long-standing familiarity with the channels, hazards, currents and markings of our coastline also qualify us to inspect and audit almost 11,000 local aids to navigation, license Deep Sea Pilots and provide Elder Brethren as Nautical Assessors to the Admiralty Court’.
For more information please contact Unite press office is on:  020 3371 2065 and/or Shaun Noble, senior communications officer, on 07768 693940