The Québec Port Authority (“QPA”) is proud to announce the signing of a long-term commercial agreement with Hutchison Ports, the world’s leading port network, and CN (Canadian National Railway), the leading North American transportation and supply chain company, to build and operate the new container terminal, known as project Laurentia (previously Beauport 2020).
This agreement increases Hutchison Ports’ global network to 52 ports spanning 27 countries including the United Kingdom, Spain, Poland, Sweden, Germany, the Netherlands, Belgium, Australia, China, Pakistan, Egypt, Argentina, Mexico and Panama. Hutchison Ports plays a strong role in the maritime industry worldwide and handles close to 85 million TEU (twenty-foot equivalent unit) per year, representing approximately 11% of the global containerised cargo trade.
The $775 million project will be financed primarily through the joint investment of the three partners. The QPA also has ongoing discussions with the federal and provincial governments to complete the financing. The new terminal facility will support hundreds of new jobs at full operations.  Hutchison Ports was selected after a competitive process in which QPA invited the leading international port operators to provide proposals to participate in the project. HSBC acted as QPA’s sole strategic and financial advisor throughout the process. 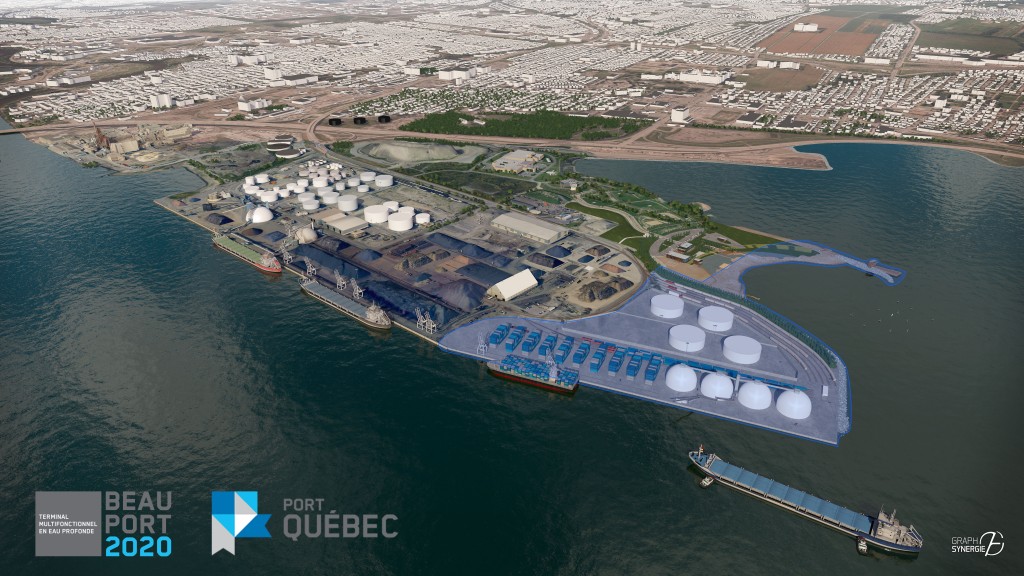 “We have chosen Hutchison Ports as it is a world-class operator, with customer-focused experience who shares our business vision regarding supply chain efficiency, innovation, safety and environmental concern. Today, through a joint venture with Hutchison Ports and CN, we are setting the stage for this project to become a North American success in terms of business and social acceptability not to mention a vector of economic development for Québec, allowing the St. Lawrence to gain additional growth and competitiveness with U.S. ports,” commented Québec Port Authority’s President and Chief Executive Officer, Mario Girard.
The agreement stipulates that Hutchison Ports will build the most environmentally and technologically advanced cargo-handling facility in North America. It is a unique opportunity for the Port of Québec’s future container terminal to become one of the terminals with the smallest ecological footprint in the world.
“We are pleased to partner with the Québec Port Authority and CN to develop the Québec container terminal. Québec City will become Hutchison Ports’ gateway to the East coast of North America. With its fully intermodal deep-water port, its strategic location to reach the Midwest market, and the strong support shown by the local authorities, the Québec project has all the attributes to be successful in this highly important market,” said Eric Ip, Group Managing Director of Hutchison Ports.
“In an economy driven by consumer spending derived freight, long haul supply chains need to be modern, cost effective and reliable. Hutchison is a world class container operator and we are confident that we are partnering with a group that can make the project a success,” added JJ Ruest, President and Chief Executive Officer of CN.

A NEW BRAND FOR AN EXCEPTIONAL PROJECT: LAURENTIA

With the project reaching a pivotal milestone, the Québec Port Authority is using the opportunity to unveil the new brand image for its deepwater container terminal. In reference to the North American continent’s genesis, the project will henceforth be known as Laurentia, reflecting the continental reach and importance of the new container terminal on the Saint Lawrence.

It is noteworthy that Laurentia terminal, a deep-water terminal project, boasts strategic assets, which will enable it to play a unique role in the continent’s supply chain. As the major inland deep-water terminal in North America, it is the only facility in the St. Lawrence, which could accommodate the new generations of very large ships. It also benefits from a direct railway and highway connection and has all the necessary space to handle efficiently thousands of containers per year. According to a study from KPMG, for the construction phase alone, the project will generate $500 million in economic benefits and an average of 1267 jobs a year. Ultimately, the project will generate $84 million in economic benefits a year and will create nearly 800 jobs, including 500 direct ones, in Québec.
The deep-water container terminal project is currently under an environmental assessment process with the Canadian Environmental Assessment Agency.

ABOUT THE QUÉBEC PORT AUTHORITYAs the last deep-water port before the Great Lakes (15 m deep at low tide), the Port of Québec is the gateway to the industrial and agricultural heart of North America, handling an average of 27M tons of cargo every year. Located inland the continent, 1,300 kilometers from the Atlantic, the Port provides access to the large U.S. Midwest market, which serves more than 100 million customers. The ships that pass through the Port are central to a supply chain that transports approximately $20 billion of goods each year. The Port of Québec is a maritime hub, which that generates and supports over 13,000 direct and indirect jobs according to the latest KPMG/SECOR study. The Québec Port Authority is an autonomous federal agency constituted under the Canada Marine Act.
ABOUT CNCN is a true backbone of the economy transporting more than C$250 billion worth of goods annually for a wide range of business sectors, ranging from resource products to manufactured products to consumer goods, across a rail network of approximately 20,000 route-miles spanning Canada and mid-America. CN – Canadian National Railway Company, along with its operating railway subsidiaries – serves the cities and ports of Vancouver, Prince Rupert, B.C., Montreal, Halifax, New Orleans, and Mobile, Ala., and the metropolitan areas of Toronto, Edmonton, Winnipeg, Calgary, Chicago, Memphis, Detroit, Duluth, Minn./Superior, Wis., and Jackson, Miss., with connections to all points in North America. For more information about CN, visit the company’s website at www.cn.ca.