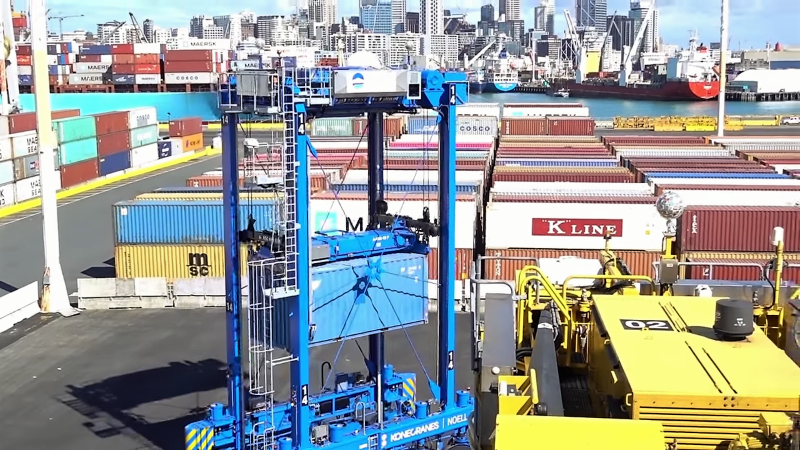 
Towering behemoths are prowling the docks of Auckland, New Zealand, in a neverending shuffle of shipping containers, stacking and unstacking them like so many out-sized LEGO bricks. And they’re doing it all without human guidance.
It’s hard to overstate the impact containerized cargo has had on the modern world. The ability to load and unload ships laden with containers of standardized sizes rapidly with cranes, and then being able to plunk those boxes down onto a truck chassis or railcar carrier for land transportation has been a boon to the world’s economy, and it’s one of the main reasons we can order electronic doo-dads from China and have them show up at our doors essentially for free. At least eventually.
As with anything, solving one problem often creates other problems, and containerization is no different. The advantages of being able to load and unload one container rather than separately handling the dozen or more pallets that can fit inside it are obvious. But what then does one do with a dozen enormous containers? Or hundreds of them?
That’s where these giant self-driving cranes come in, and as we’ll see in this installment of “Automate the Freight”, these autonomous stevedores are helping ports milk as much value as possible out of containerization.

It’s a pretty safe bet that everyone has seen shipping containers before, even if you’re nowhere near one of the massive container terminals that sprawl out from ports all over the world. That’s because standard ISO containers are designed for intermodal carriers, meaning they can go directly from ship to land carriers without ever being opened or transferred. So even far inland, stacks of containers can be seen plying railways to landlocked distribution centers, or on highways being moved by tractor-trailers.
Lying between these two modes of transportation, however, is a logistics problem that managers of ports have to deal with: how to store the containers temporarily. It’s rarely feasible to load a container directly from a ship onto a train or truck and have it whisked away to its final destination, mainly because a container ship’s cargo is intermixed. Even though container sizes are standardized, different container types are often grouped together in the ship’s cavernous holds. This is especially true for food, which is stored in refrigerated containers that need power during the voyage. Also, hazardous materials need to be segregated, the load needs to be balanced, and a dozen other factors considered that all effectively randomize the containers within a ship.
When containers come off the ship they have to be sorted for the next leg of their journey. These containers are staged since transportation of that leg isn’t always immediately available, and therein lies the problem for port managers.

Containers take up a lot of space. ISO containers are all 8 feet (2.44 m) wide and are measured by TEUs, or twenty-foot (6.1 m) equivalent units. So, in any given load there will be a mix of 20′ and 40′ containers, plus a few oddball sizes mixed in (because standards aren’t always standard).
These boxes take up a lot of space on the ground, and the yards used for sorting them tend to be enormous. Luckily, containers stack nicely, and so port managers can achieve some space savings by piling the containers up. This requires special vehicles called straddle carriers — basically mobile cranes that can straddle a stack of containers and that are tall enough to hoist a container up over the top of the stack and carry it away.
Straddle carriers have traditionally been operated by a human driver, sitting in a cab high above the ground with a commanding view of the yard. Like other heavy equipment operators, it’s a job that requires skill and focus, lest disaster occurs. But increasingly, straddle carriers are being converted into autonomous vehicles, like the 27 units being used at the Ports of Auckland in New Zealand to increase the port’s capacity from 900,000 TEUs per year to over 1.7 million.
The pinpoint positioning that these self-driving behemoths are capable of has greatly increased the capacity of Auckland’s port, which is seriously constrained by its location in the heart of a major city.

Being able to squeeze more containers into the same space relies on location data that GPS would never be able to achieve, so the straddle carriers instead use a local positioning system based on time-of-flight from a series of transmitters located on poles around the yard. This allows the straddle carriers to achieve positional accuracy of 1 inch (25.4 mm).
The container terminal environment is an ideal test bed for self-driving vehicles. The environment is highly controlled, and the exact location of each vehicle within the system, manned or unmanned, is known. The lighting is controlled and even, the pavement is flat and smooth, and the task, while enormous, is well-defined and fairly simple. It’s the perfect environment for self-driving vehicles, and the gains in throughput along with the reduction in costs are more than enough justification to automate the freight.
[Featured images from Tom Scott’s excellent video on automation at the Ports of Auckland]

READ MORE FROM THIS SERIES:AUTOMATE THE FREIGHT