Fatal Fall: Lack of Conviction About Safety Procedures On Board 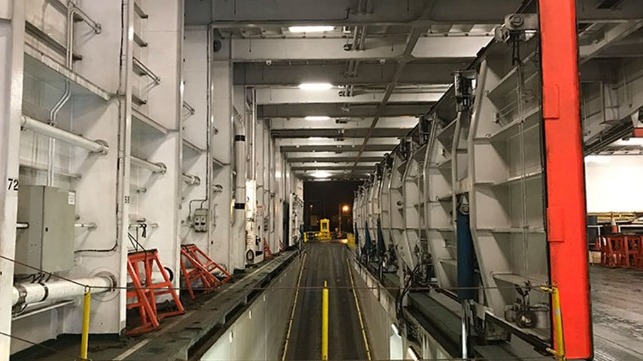 BY THE MARITIME EXECUTIVE
The U.K. Marine Accident Investigation Branch has released its report into the death of a seafarer on the Cyprus registered ro-ro freight vessel Seatruck Pace saying work practices on board indicated that adherence to the vessel’s safety procedures was based on routine rather than of understanding and conviction.
The assistant bosun died as a result of a 4.5-meter (15-foot) fall through a vehicle ramp hatch. He was working alone and preparing to paint the leading edge of the open ramp hatch cover. He was found shortly after 0820 on December 17, 2018 on the ramp between the main vehicle deck and the lower hold, having apparently fallen, along with a heavy metal trestle. Several crew heard the sound of the trestle landing, but there were no witnesses.
The assistant bosun was treated at the scene by the ferry’s crew and paramedics and then taken to hospital. He died three days later.
The investigation identified that to fall the man must have crossed a temporary rope barrier on to a narrow section of deck between the ship’s side and the open ramp hatch on which several trailer trestles were stowed. It was not known why he moved into this area; his allocated work did not require him to do so, and he was not wearing fall protection equipment. The investigation also identified:• Although the risk of falling was apparent, it was accepted by the assistant bosun, who had probably taken similar risks in the past.• Work practices adopted by other deck ratings during hatch cover maintenance two days earlier indicated that adherence to safety procedures was more a matter of routine and compliance, rather than conviction.
Seatruck Ferries Ltd, the ferry’s manager, has taken actions aimed at preventing similar accidents, ensuring safe systems of work and gauging and improving the safety culture among its crews.


The report is available here.