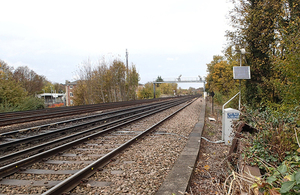 At around 00:28 hrs on the morning of 6 November 2018, a passenger train from London Victoria to Three Bridges, travelling at about 69 mph (111 km/h), struck and fatally injured a track worker in the vicinity of Stoats Nest Junction, near Purley. The accident occurred after the track worker had placed equipment on the track as part of the arrangements for the protection of an engineering possession. Having placed the protection equipment, the track worker then walked along the track until he reached the end of the protected area, and continued walking with his back to rail traffic on an open line. He may have been going to look at some lineside equipment, and believed that no trains would approach on the line he was walking along. He was probably fatigued, and may have been distracted by personal issues linked to the fact that a second person, the possession support assistant who was supposed to be with the track worker, was not present as he had not attended for work that night.
Underlying factors associated with the accident were the nature of the work which exposed the track worker to risk while he was putting out protection for the possession; that the labour supplier’s management processes had not sufficiently identified and addressed the risk of fatigue among zero hours contracted staff; and that the labour supplier’s management processes had neither identified nor prevented staff absenting themselves from work without being detected.

The RAIB has made two recommendations and identified three learning points. One recommendation is addressed to Network Rail, to improve the way its labour suppliers manage the risks associated with the use of workers on zero hours contracts, in particular the management of their lifestyle and fatigue. The second recommendation is addressed to Vital Human Resources Ltd, the labour supplier, to commission an independent review of the actions it has taken following the accident at Stoats Nest Junction to assess their effectiveness in detecting and preventing the type of behaviour seen in the accident, and reduce the risks from fatigue. The RAIB has previously made recommendations about reducing the exposure of staff to risk while carrying out possession protection duties, and these are still being considered by the railway industry.
A learning point highlights the need for safety-critical staff to be aware that distraction caused by family issues or other employment may affect their fitness for duty. Other learning points highlight the importance of track workers being alert to the risks on the railway, even when they believe that they are working under protection, and the limitations of the railway industry’s ‘Sentinel’ system if it is used for establishing the presence of staff on site.

This sad accident was the first in more than four years involving the death of a track worker who was struck by a train.
When workers are employed on a casual basis on zero hours contracts, there can be great pressure for them to try and juggle multiple jobs to make ends meet. The possible effects of such patterns of employment on fatigue and fitness for work are significant. We are therefore recommending that the railway industry reviews the way it manages the use of staff on zero hours contracts, to minimise the risk associated with this pattern of work.
The continuing requirement for people to go onto the track to place and remove red lamps and explosive detonators, as part of the arrangements for protecting engineering work on the railway, is something that RAIB has queried before. Following a fatality at Reading in 2007, and again after a near-miss in north London in 2017, we recommended that the railway industry should find ways of eliminating the need for people to be exposed to the risk of being struck by trains in these circumstances.
Modern technology means that there are many ways in which the position of trains can be established, and warnings given to drivers and to track workers, if a train movement goes beyond a safe limit. I believe that the industry should continue to explore ways of eliminating the need for Victorian methods of protection on the twenty-first century railway. It is deeply saddening that another person has died while putting down protection for his fellow railway workers- there must be a better way.
The need to better manage the continuing risk to those who work on the tracks has again been highlighted by the tragic death of two track workers who were struck and killed by a train at Margam, near Port Talbot, on 3 July. RAIB has started a detailed investigation into the causes of this dreadful event. This will clearly identify the lessons to be learnt and any necessary recommendations for the improvement of safety.
My thoughts are with all those affected by both these tragic accidents.