Between these two trucks is a transit van

Between these two trucks is a transit van, next time you decide to nip into a gap like this on the motorway, think again 😔 20 mins late in this life is better than 20 years early in the next

And we all want our deliveries next day for no extra charge !!!!

We’ve all encountered the classic white van man. He helps us move flat, fits our new kitchen, yells at us when we drive too slowly or force him to brake by running across the road. We don’t mind his rough edges, because he’s so much cheaper than his smoother rivals.

Well, this is the stereotypical and rather snobbish image of the white van man. But it seems that he (or sometimes she) is getting too widespread to be pigeonholed. A report by the Society of Motor Manufacturers and Tradershas revealed that there are now more than 4m commercial vans in Britain – a 4% increase on the previous year. Together those millions of vehicles covered 45bn miles.

Almost six out of 10 of them are actually white, by the way. Silver and blue are the next most popular colours. 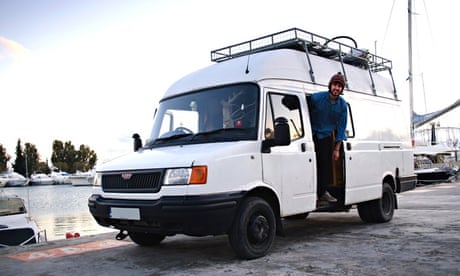 Read more
The report puts much of the increase down to growing business confidence and use of online shopping, and many of us will greet the rise of white van man with optimism and delight. Economic growth is the last chance for those still wedded to the hyper-austerity that has rendered much of the country unworkable.

But the trend reveals another, troubling aspect to the business climate that has emerged in the wake of the recession.

The service and knowledge economy is often touted as a cleaner and more environmentally friendly way of organising our society. Bill Gates once heralded this as the era of “frictionless capitalism”, a spotless, shiny and pollution-free world. But now we are realising that web-based business models and technologies have a concrete and dirty side.

Near slave-labour conditions in African cobalt mines underlie most of the handheld devices we use in the west. Closer to home, the dramatic increase in vans and other traffic is taking a toll on our air quality. In London alone air pollutants have been linked to approximately 9,500 deaths a year.

The rise of the white van nation also tells us a lot about the kind of work that has been encouraged and normalised over the last few years. One in seven workers in this country – 4.8 million in all – are now their own bosses, and many of the drivers delivering flowers for supermarkets or mattresses for department stores will be self-employed contractors.

The incredible rise in self-employment is often portrayed as an exceptionally good thing for business and society. You have more flexibility and autonomy. You can be your own boss and decide when and where you work. This is what the management guru Peter Drucker approvingly dubbed the “employee society”, where we all own the fruits of our own labour, instead of big business.

Unfortunately, the reality is bleaker. It is unlikely that the next Richard Branson will emerge from today’s conditions. According to the Office for National Statistics, the self-employed suffered a 22% drop in real pay since between 2008-9 and 2014, leaving them with average earnings of £207 a week. And, willingly or not, many nominally self-employed workers find themselves working full-time for a single client, without any of the benefits of regular employment. White van man can spend 40 or more hours a week delivering parcels for the same supermarket or telecoms company, with no right to sick pay, paid holiday or pension provisions.

This is the grimy new world of the Uberfied workforce. The business logic became clear in 2013 when Ryanair’s pilots clashed with management over a combination of safety concerns and working conditions. The pilots were being hired on a self-employed basis, meaning that they, rather than the airline, would have to cover the expense of uniforms, stopover hotels and other vital items.

Shifting the costs of employment on to the worker is increasingly the norm. But this wasn’t the main reason for the revolt. Because the pilots were only paid when they actually flew, they said they felt pressured to work even if they were unwell or fatigued. For them, this was a safety issue. (A Ryanair spokesman described this claim as “rubbish”.) One wonders if the fans of zero-hours contracts would feel so rosy if they discovered their plane was being flown by a tired pilot on one of these punitive contracts.

It’s time, then, to update the cliche of the white van man. Instead of a self-reliant and contented plumber or electrician, that Ford Transit or Citroen Relay is probably being driven by an exhausted and exploited zero-hours worker. And while its shiny bodywork may suggest a clean, frictionless capitalism, the reality is a dirty and polluted country gasping for air.

… we have a small favour to ask. More people are reading and supporting The Guardian’s independent, investigative journalism than ever before. And unlike many news organisations, we have chosen an approach that allows us to keep our journalism accessible to all, regardless of where they live or what they can afford. But we need your ongoing support to keep working as we do.
The Guardian will engage with the most critical issues of our time – from the escalating climate catastrophe to widespread inequality to the influence of big tech on our lives. At a time when factual information is a necessity, we believe that each of us, around the world, deserves access to accurate reporting with integrity at its heart.
Our editorial independence means we set our own agenda and voice our own opinions. Guardian journalism is free from commercial and political bias and not influenced by billionaire owners or shareholders. This means we can give a voice to those less heard, explore where others turn away, and rigorously challenge those in power.
We need your support to keep delivering quality journalism, to maintain our openness and to protect our precious independence. Every reader contribution, big or small, is so valuable.
on August 27, 2019