The Hong Kong firm which has bid £2.7 billion to buy Greene King would keep the company's headquarters in Bury St Edmunds.
CK Bidco, a subsidiary of CKA, has made a cash offer for Greene King, which runs more than 2,700 pubs, restaurants and hotels across the UK.
Greene King's directors will recommend the deal to shareholders.

In their announcement yesterday, the companies said that CK Bidco 'intends to keep Greene King's headquarters and headquarter functions in Bury St Edmunds and its support centre in Burton upon Trent'.
It added that CK Bidco had no plans to 'make material changes' to staff employment and did not intend to 'initiate any material headcount reductions within the Greene King organisation as a result of the acquisition'.
CKA was founded by Hong Kong's richest man Li Ka-shing and its global empire includes property development and investment, retail, ports, utility companies and aircraft leasing.

We will be calling on the new owners to retain the current pub portfolio to safeguard thousands of pubs and jobs across the country - Nik Antona, CAMRA's national chairman 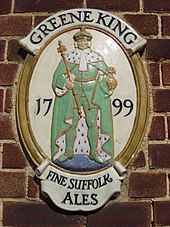 Union Unite said it would seeking an 'urgent meeting' with the two companies for reassurances on job security.
Unite has more than 250 members, including draymen, brewery production staff and warehouse workers, at the brewery which was founded in 1799.
Unite’s members are at the firm’s headquarters in Bury St Edmunds, as well as distribution centres in Abingdon, Oxfordshire and Eastwood, Nottinghamshire.
Regional officer Mark Jaina said: "Unite will be seeking an urgent meeting with Greene King, as well as with the management of CK Asset Holdings to gain a better understanding of the future business strategy.
"This is a major takeover of a well-known British company with a long history in brewing and pub ownership built up over 220 years. It could have major ramifications for this sector, given the magnitude of the takeover.
"Our first priority is to seek reassurances for our members on future job security, and pay and employment conditions.
"However, we need to study this takeover in much greater detail before commenting further."
The Campaign for Real Ale (CAMRA) has raised fears about the take-over.
Nik Antona, CAMRA's national chairman, said: "The news that Britain's largest pub and brewery company has been sold to an international asset company is very concerning for our beer scene.
"We are always wary of one company controlling a large share of the market, which is seldom beneficial for consumers.
"We hope that Greene King will continue its operations as normal without any disappointing changes.

"We will be calling on the new owners to retain the current pub portfolio to safeguard thousands of pubs and jobs across the country."
Mr Ka-shing is the senior advisor to CK Asset Holdings Limited, which focuses on property, infrastructure and utility assets as well as aircraft leasing, and CK Hutchison Holdings Limited with businesses in ports and related services, retail, infrastructure, energy and telecommunications.
He was previously chairman of the two companies.
CK Asset holds a 40 per cent interest in CK William Group - an owner and operator of energy utility firms in Australia.
Utility and energy companies ista, in Germany, and Reliance Home Comfort, in Canada, are also part of CK Asset.
The A.S. Watson Group which includes Savers, Superdrug and The Perfume Shop is a member of CK Hutchison Holdings.
Mobile operator Three is also part of CK Hutchinson Holdings as are the ports of Harwich International, Harwich International (cruise terminal), London Thamesport and The Port Of Felixstowe.
Mr Ka-shing's elder son Victor is chairman and group co-managing director of CK Hutchison Holdings, chairman and managing director of CK Asset Holdings, and chairman of CK Infrastructure Holdings and CK Life Sciences Int'l., (Holdings) Inc.
His younger son Richard is chairman of PCCW, one of Asia's leading information technology and telecommunications companies