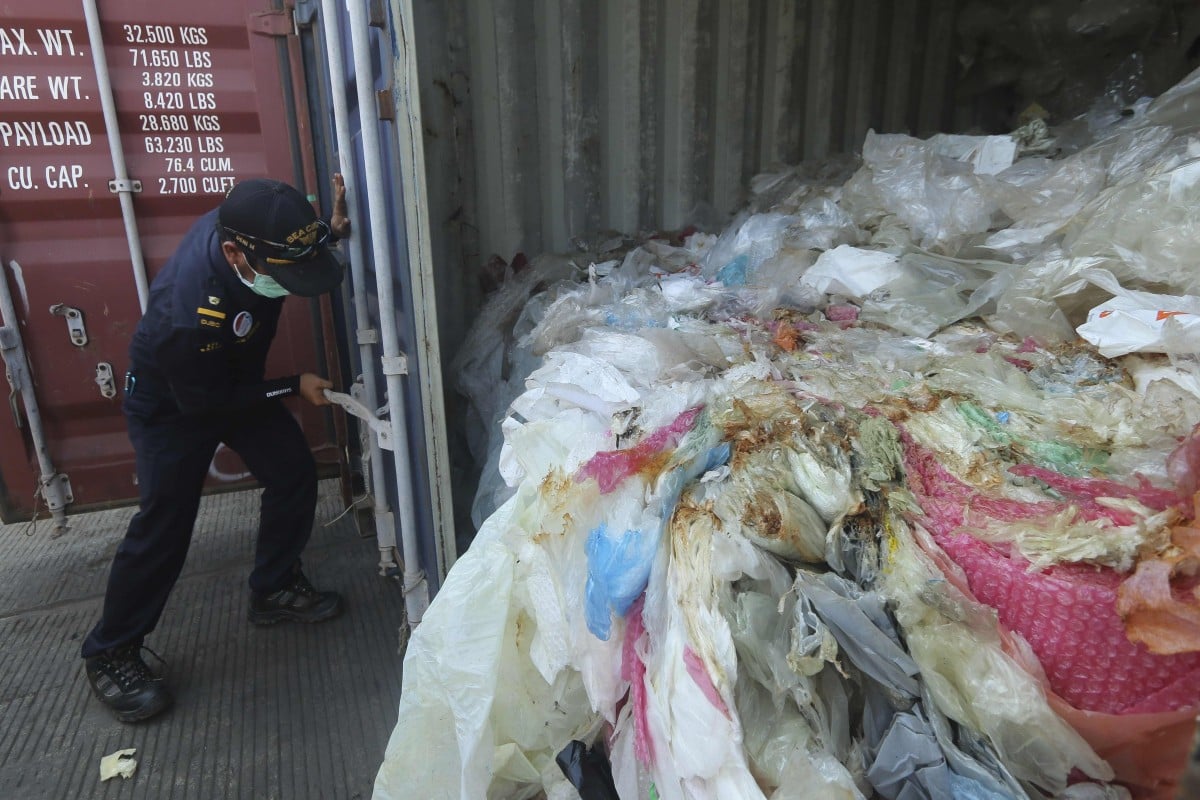 Singapore
.
“The containers left on Monday and some officials were there to see the ship depart,” head of local custom office Susila Brata said on Tuesday.
Earlier, customs spokesman Sumarna said that five containers were destined for Hong Kong and two were headed back to France.

Authorities were still waiting for clearance to return another 42 containers of waste at the port, including shipments from the

Germany
.
Jakarta has stepped up monitoring of imported waste in recent months as part of a push back against serving as a dumping ground for foreign trash.
For years China received the bulk of scrap plastic from around the world but closed its doors to foreign refuse last year in an effort to clean up its environment.
Huge quantities of waste have since been redirected to Southeast Asia, including

Malaysia
, Indonesia and to a lesser degree the

Philippines
.
Global concern over plastic pollution has been spurred by shocking images of waste-clogged rivers in

Southeast Asia
and accounts of dead sea creatures found with kilos of refuse in their stomachs.
Around 300 million tonnes of plastic are produced every year, according to the Worldwide Fund for Nature (WWF), with much of it ending up in landfills or polluting the seas, in what has become a growing international crisis.
Connect with us on

Twitter
and
Facebook
This article appeared in the South China Morning Post print edition as: Illegal waste sent back to Hong Kong and France
Southeast Asian nations are pushing back against serving as dumping grounds for foreign trash. Photo: AFP
The stench of curdled milk wafted from a shipping container of waste at Malaysia’s Port Klang as Environment Minister Yeo Bee Yin told a group of journalists in May she would send the maggot-infested

rubbish back where it came from
.
Yeo was voicing a concern that has spread across

Southeast Asia
, fuelling a media storm over the dumping of rich countries’ unwanted waste. About 5.8 million tonnes of trash was exported between January and November last year, led by shipments from the US,

Japan
and Germany, according to Greenpeace.
Now governments across Asia are saying no to the imports, which for decades fed mills that recycled waste plastic. As more and more waste came, the importing countries faced a mounting problem of how to deal with tainted garbage that could not be easily recycled.
“Typically, 70 per cent of a shipment can be processed, and the other 30 per cent is contaminated with food,” said Thomas Wong, manager of Impetus Conceptus Pte, a Singaporean company that shreds locally produced plastic waste before sending it to recycling mills in

Malaysia
and Vietnam. Contaminated trash is sent to incinerators and landfills for a fee, but some recyclers “just find a corner and burn it,” Wong said. “The smoke smells just like palm oil, so they hide in a plantation and light up at night.”

Thailand
revealed illegal recycling, open burning, water contamination and a rise in illnesses tied to pollution, the organisation said in an April 23 report.
When

China banned imports
in January 2018, it started a domino effect. Shipments were diverted to Southeast Asia, which soon became overwhelmed, forcing governments to take action.
Malaysia announced a ban in October. Thailand stopped issuing import licences last year and is likely to impose a ban in 2020, according to Yash Lohia, an executive director at Indorama Ventures Pcl, a Bangkok-based plastics producer and recycler. The

Philippines
said it is sending 69 containers of garbage back to Canada. Indonesia said it will tighten waste-import rules after discovering shipments containing toxic waste.

Vietnam
have also announced restrictions.
Malaysia’s Yeo said garbage is still getting into the country in falsely declared cargoes, but the government hopes to stop the trade completely by the end of this year.
As Southeast Asia stops accepting the material, companies will look somewhere else, said Wong at Impetus Conceptus. “I think Africa will be next.”
But social media has ensured public awareness of the problem in both developing countries and the wealthy nations that export the trash. That will make it increasingly difficult to export unwanted refuse.

69 containers of trash dumped in Philippines arrive back in Canada

“Everyone can voice their opinion on waste,” said Indorama’s Lohia. “That is when countries start taking this more seriously.”
The long-term message for nations is clear: deal with your own garbage.
But how to do that? Humans generated 2.01 billion tonnes of solid waste in 2016 and by 2050, that could rise to 3.4 billion tonnes, according to the World Bank. About 12 per cent of all municipal waste in 2016 was plastic ⁠– 242 million tonnes of it.
The solution could lie in new technologies and a change in social behaviour that reduces and even eliminates the need for landfills and incinerators. Here are some of the ways that companies, local authorities and start-ups around the world are tackling the problem.
Most rubbish ends up in a landfill or just chucked into the street to be washed away into rivers and oceans. In giant municipal dumps in countries such as India and Indonesia, informal “trash pickers,” who live near or even on the mountains of rotting garbage, make a living from things they can sell. 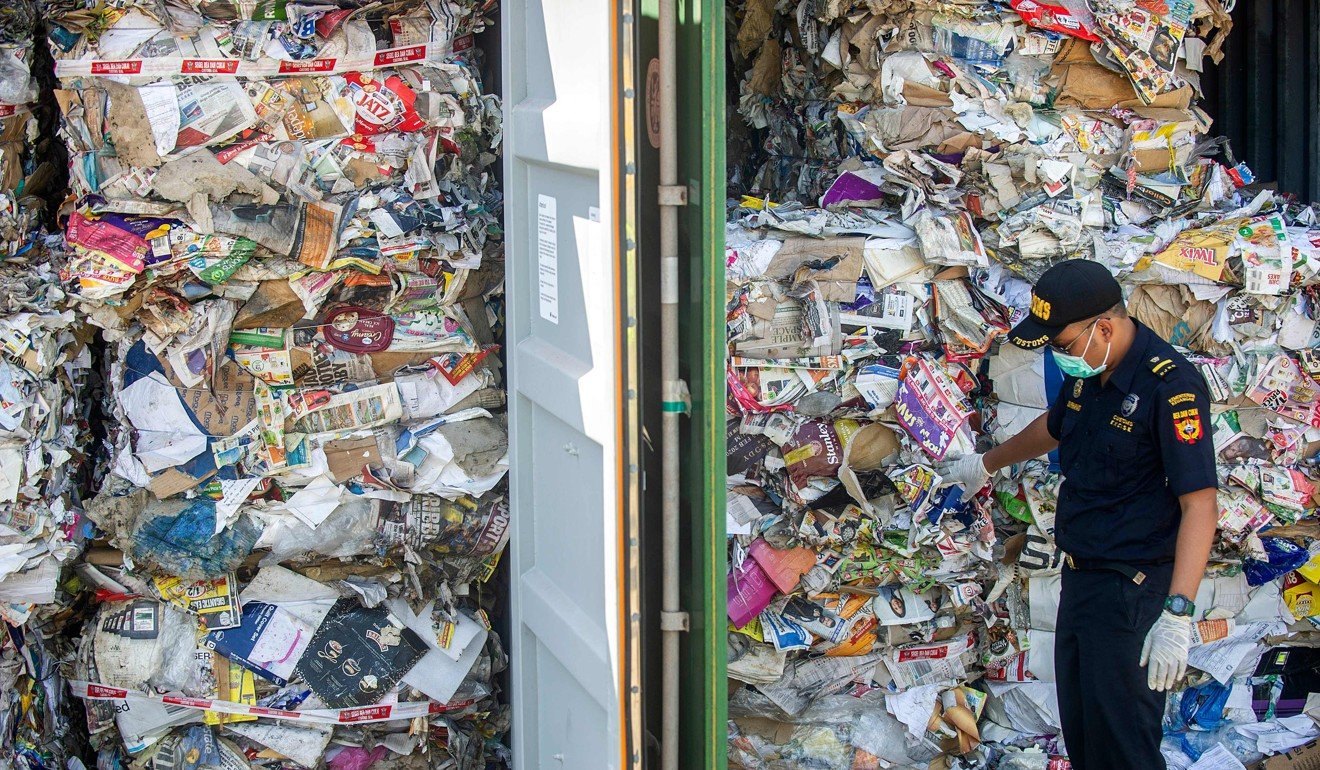 An Indonesian customs officer inspects containers filled with trash originating from Australia at a port in Surabaya. Photo: AFP
Share:
Companies tap the methane gas produced by decomposing organic waste trapped in the dumps.
“We are sucking out the gas and using it to make electricity,” said Sarun Tunwattanapong, who is building a 5-megawatt power plant in Thailand next to a landfill in Nonthaburi province.
Trash can be incinerated to produce electricity. In

Singapore
, the residual ash is dumped by barge to create a new island. But it’s expensive. Dioxins and other emissions produced during burning need to be treated by electrostatic precipitators and lime powder. And it still produces greenhouse gases.
Solid waste can also be gasified at high temperatures using plasma torches to produce syngas, metals and a glass-rock slag for paving roads. Maharashtra Enviro Power Limited’s plant in Pune, India, turns hazardous factory waste into feedstock for boilers.
Artist Joseph-Francis Sumegne scoured rubbish dumps in the 1990s for junk to make the 12-metre-tall New Statue of Liberty monument in Douala, Cameroon. Filipino Oscar Villamiel salvaged thousands of doll heads and debris from a landfill in Manila to create the Payatas installation in 2012. This year, UK duo Tim Noble and Sue Webster’s shadow 2002 waste sculpture “Real Life is Rubbish” was sold at auction at US$75,000.

Malaysia vows to return 450 tonnes of rubbish to likes of US, Japan

“Infinite wealth, infinite detritus,” said Bridget Tan, director of the Institute of Southeast Asian Arts and Galleries at Singapore’s Nanyang Academy of Fine Arts. “There’s something to be said for the irony in the obscene excess of consumption.”
Sorting trash can be an unpleasant job, one reason why a lot of rubbish ends up in developing countries with lower wages.
But technology is increasingly automating the task and making it more efficient. Helsinki’s ZenRobotics Ltd. has developed robots that grab wood and metal from conveyor belts of trash.
And in Angelholm, Sweden – ranked the country’s best municipality for waste management – trash collection company NSR AB uses near-infrared beams to identify different types of plastic as the rubbish shoots along a belt. Jets of air remove the plastic items, leaving non-recyclable packaging and organic waste to head to an incinerator to produce power.
Artificial intelligence systems are being developed to make the process more efficient. “Robots could be an interesting future alternative if they learn to identify plastic material types and if they can sort fast enough,” said Pernilla Ringstrom, a manager at NSR, which collected 538 tonnes of plastic in 2018 that was made into composite ties for railways or sold to companies in Sweden and Germany. 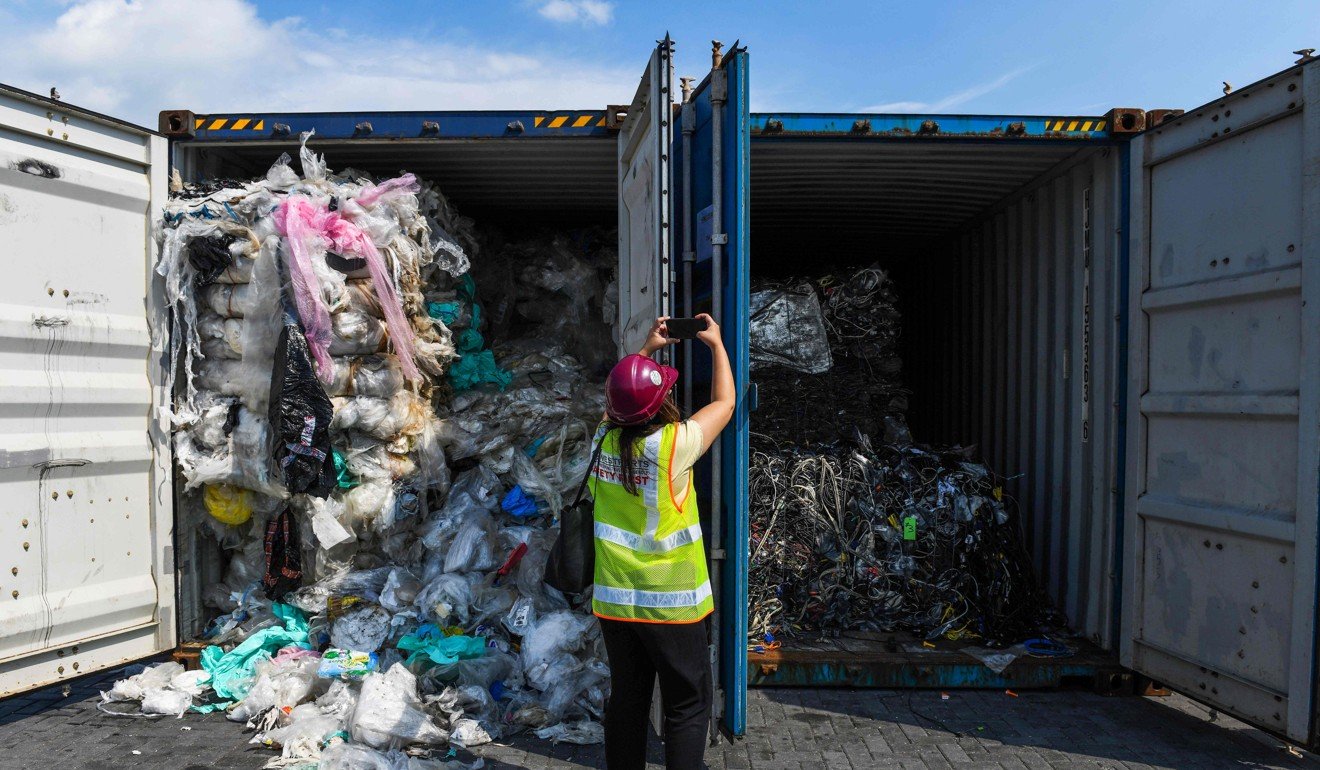 Sorting trash can be an unpleasant job, one reason why a lot of rubbish ends up in developing countries with lower wages. Photo: AFP
Share:
One challenge is getting people to sort their waste at home. In

Taiwan
, garbage trucks play classical music tunes like Beethoven’s “Fur Elise” to alert people to run down from their flats. Plastics and aluminium cans get tossed into a white truck before it leaves while incineration waste goes into a yellow one.
In Japan and

Europe
, recycling rates exceed those in Southeast Asia because citizens give their trash a quick rinse after pouring out leftover liquids, according to Impetus’s Wong. Food, shampoo and coffee all prevent plastic waste from being recycled. “In Singapore, only four per cent of plastics are recycled and the remaining 96 per cent are thrown out,” said Wong. “In Japan and Europe, people take more care and wash things, so their trash isn’t as messy.”
Singapore’s Taraph Technologies is one of the companies using bacteria or organic processes to tackle the issue. It’s harnessing natural enzymes that digest plastics and turn them into chemicals normally produced in oil refineries. Mono-ethylene glycol from enzyme-eaten plastic bottles can be sold at prices 10 times higher than the value of trash, said Taraph co-founder Liew Mei Shan, who expects the technology to be commercially available in five to 10 years.
“Waste collection is a cost,” said Liew. “If we can transform that into a revenue unit to cover expenses, it will become profitable for the collector.”

Philippines to return 25 tonnes of trash dumped by Hong Kong

Start-ups and companies around the world are looking at alternatives to plastic, which has outpaced the production of almost every other material since the 1950s. Paper straws are making a comeback after widespread social-media campaigns. Food boxes and disposable cutlery are being made from grains or sugar cane waste. As more countries ban plastic bags, supermarkets are looking for other ways to wrap groceries. In Vietnam, some are even wrapping vegetables and meat in banana leaves.
A more hi-tech route is being taken by companies such as Netherlands-based Plantics BV, which is using plant-based resins made by polymerising glycerol and citric acid that can be used instead of petrochemical-derived plastics.
Singapore-based RWDC Industries has launched Solon, a biodegradable polymer produced by microbial fermentation of plant-based oils.
“Plastic takes seconds to produce, minutes to use, but takes centuries to degrade,” said Zhaotan Xiao, the company’s president for Asia-Pacific. “Why are we making single-use disposables with something indestructible?” 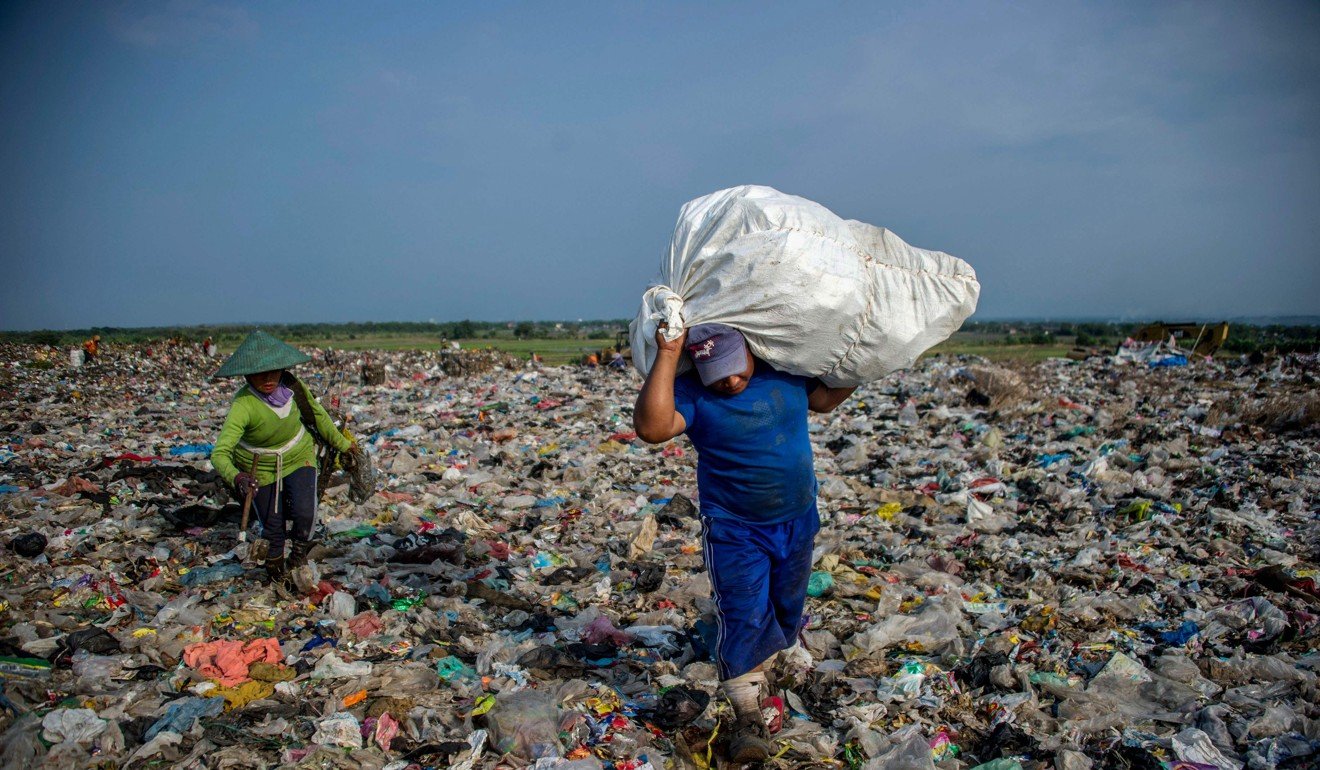 Scavengers collect waste at Sidoarjo garbage dump in East Java, Indonesia. Photo: AFP
Share:
Ultimately, the best solution is to not produce any rubbish that cannot be recycled. That is the aim of the residents of Kamikatsu, a mountainous village in Japan. Residents already wash oil off gyoza plastic packaging and sort their trash into 45 categories. Styrofoam and dirty plastic are made into lumps of solid fuel, which can be burned instead of coal. Polyester clothes are sold in a local second-hand shop. Clean plastic is taken away by companies such as Kao Corp. for recycling.
Akira Sakano, who heads the town’s Zero Waste Academy, wants to go further. She is working on eliminating the village’s waste production by 2020. One trial project asks detergent suppliers to set up a stall where people can refill washing-liquid bottles. At a community craft Centre, seamstresses stitch together a jacket out of red children’s flags.
“We already have solutions in our hands,” said Sakano. “Innovations like bioplastics and technology are necessary, but also how do we turn our knowledge of sustainable materials in our culture or community into modern life?”
Connect with us on