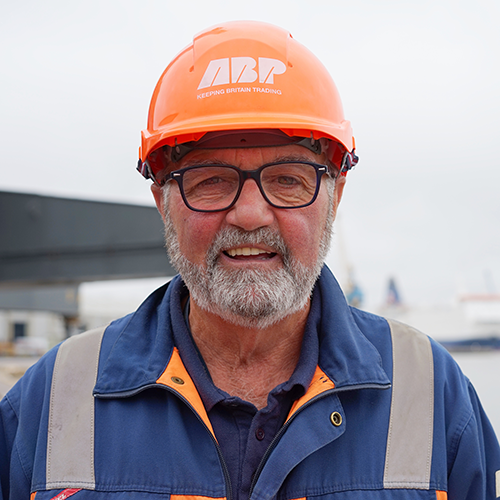 The last registered National Dock Labour Board Docker on the Humber, Malcolm Bell at the Port of Hull
Malcolm Bell, or ‘Mally’ as he is known to all, has retired from Associated British Ports (ABP) following five decades working on the Humber Estuary. Here, Mally reflects on the changes he has seen across his career as a Docker.
“My first job when I left school was an apprentice welder at the Drypool Engineering Company in Hull, based at the shipyard where they built the Bounty. About six weeks later I went on to the barges sailing up the River Trent and the River Ouse to Ganisborough, moving general cargo such as shipments of tinned fruit.”
At 26, Mally joined the British Transport Docks Board (BTBD) before the company became ABP. It was there he became a registered Docker and received his Dockers book.
“In 1978 I started as a Docker for the National Dock Labour Board (NDLB). That’s when the docks were absolutely full of ships from everywhere in the world and most Dockers rode a bike.
“Every day we would go into the ‘pen’ that ran the labour exchange, where we would get our job. We used to call it the pen as it was like a sheep pen with hundreds of push bikes outside. Once we had picked up our job we would head off on our bike to the vessel and begin work, loading or discharging its cargo.”
Highlighting the major changes in safety culture over the last 50 years, when Mally became a Docker, no protective equipment was issued. Today across its entire Port operation, ABP staff are issued and have to wear the latest in protective equipment, including steel toe capped boots, a hard hat, glasses, gloves and high visibility clothing.
“When I joined, Dockers were issued with Wrangler gear; we were given boots, jackets and jeans. Back then it was top class Wrangler gear and you always knew who was a Docker in the town because they were all out in their Wrangler gear on a night.”
It’s not just the safety clothing that has changed over the years. The equipment Mally has used across his career has also modernised.
“We used to work a lot with derricks which are static cranes on-board old freighters and winches; using a rope you would pull the cargo up, swing it around onto the ship and lower it down into the hold. Now they are all Ro-Ro ships, where the cargo is driven on and off vessels, they are a lot easier to handle, meaning more tonnage but less time to discharge and load.”
In early days everything was lifted off a pallet and stored by hand, the Dockers would call this port operation ‘hand balling’.
“Forklifts took over from all this kind of cargo handling. These days nearly everything is handled with a forklift. My favourite piece of machinery was the cranes. I used to enjoy crane driving and tug driving, taking the trailers on and off the ships. To drive a tug really well can take about 2 years of practice before you are absolutely confident. It requires some real driving skill to push a trailer like a 40 tonne MAFI up a ramp into a vessel.”
Mally has undertaken a great deal of fundraising for charity over the years, running marathons and half marathons along with swimming the Humber Estuary on a number of occasions.
“About four or five years ago I heard about a corporate swim across the Humber and asked to represent ABP, raising money for their chosen charity at the time. The conditions were rough on the day but the swim went ahead. As I swam, one of the other swimmers was getting a bit close, I thought it odd that he had a grey swimming cap on, we were all wearing blue caps. When I got out the lads on the lifeboat who accompanied us on the swim said: “Did you see that seal playing with you?” I said I thought it was a swimmer!”
With a grandfather and father who worked on the docks, Mally’s two sons and grandson are carrying on the family tradition. After five decades working on the Humber, Mally has now retired from ABP at 68, but he is still working two days a week with an agency.
“I have really enjoyed my working life. It has been a fantastic career and I have enjoyed every minute of it. What makes it a great place to work is the people I work with, they all have hearts of gold. Everybody looks after each other.”
Mally is getting married in August to his beloved Carol, whom he met three years ago, courtesy of his daughter. Mally proposed to Carol in Australia on Cottesloe Beach in Perth. With a wedding to prepare for, a new house and plenty of travel plans, Mally will be keeping himself busy.
“When I started working, an old Docker said to me that my working life will feel like five minutes, and do you know what, he was absolutely right. If I wasn’t getting married I’d probably work until I was 100, it has been brilliant.”
ABP Humber Director Simon Bird said: “Colleagues from across the Humber report that Mally is kind, funny, and hugely supportive to colleagues, especially the newest recruits, always welcoming them into the fold. On behalf of everyone here at ABP Humber we extend our heartfelt thanks for everything he has done over the years. It was an honour to present Mally with the ABP Humber Lifetime Achievement Award earlier this year and we wish him all the very best.”