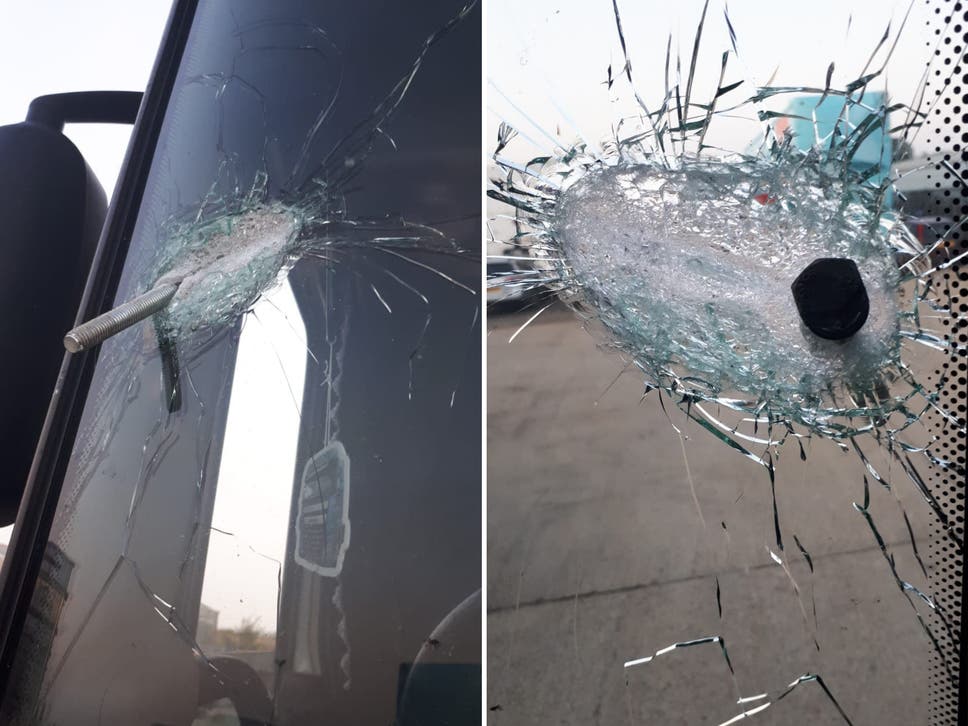 ‘If it had gone right through it would have killed him,' boss says of victim

Police are investigating reports of criminal damage after a metal bolt was allegedly thrown at a lorry windscreen in Corringham, Essex, on 27 August 2019. ( Mickey Atkins )

A lorry driver allegedly needed surgery and another had his neck cut after metal bolts were thrown through their windscreens in Essex.
One of the vehicles was reportedly travelling on The Manorway, in Corringham, near London Gateway port when a bolt smashed through the windscreen on the driver’s side.
Mickey Atkins, who owns the 44-tonne lorry, said his driver was injured by broken glass during the incident on Tuesday morning.
The 49-year-old, who runs South Essex Services, told The Independent: “He was driving up The Manorway and next thing there was a massive bang and dust everywhere and blood where the glass has shattered and cut all his neck.


“There was a bolt literally sticking through the screen. If it had gone right through it would have killed him.
“There’s not a lot that scares him but that absolutely frightened the life out of him.”
Mr Atkins said he had heard of similar incidents happening to others recently, including one driver who allegedly had to go to hospital for surgery after he was hit in the face and “knocked unconscious”.
The business owner, who has driven lorries for 28 years, said he believed the bolts were being deliberately thrown by someone in a passing vehicle rather than by youngsters or someone on a bridge.

A spokeswoman for Essex Police said officers were investigating one report of criminal damage to a lorry on 27 August, but urged anyone with information about similar incidents to get in touch.
She said: “We received reports of criminal damage to a lorry on Corringham’s Manorway on Tuesday morning, 27 August.
“The damage is reported to have occurred between the London Gateway in the direction of Corringham.
“It is believed that a metal bolt was thrown at the windscreen of the vehicle at around 5.20am, causing the glass to break. The driver suffered minor injuries.
“Our enquiries are ongoing.
“Anyone with information about this damage, or similar incidents which may not have been reported to our officers, is asked to call us on 101 quoting the reference 529 of 27 August.”