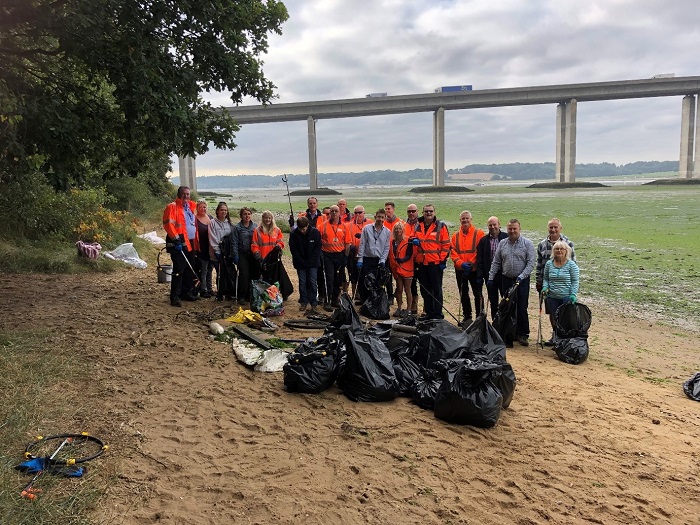 Image Caption: Andrew Harston, Director, Wales & Short Sea Ports, Associated British Ports (far left) and the cross-regional team clean up Pipers Vale beach
ABP organised a beach clean in September, at Pipers Vale, which saw the participation of 40 people as part of the nationwide Great British Beach Clean initiative.
During the beach clean, over 40 bags of rubbish, weighing around 250kg in total were collected, making a significant difference to the local environment. Some old bicycle frames, other sizeable items of rubbish and household plastics were
removed, helping make the area safer for local wildlife.
The annual Great British Beach Clean initiative has been leading the way in tackling pollution for 25 years, helping make significant positive impacts on the reduction of beach litter.
Andrew Harston, ABP’s Wales and Short Sea Ports Director, said: “It was fantastic to see so many people come together to clean up the local beach at Pipers Vale and we were proud to organise it during the Great British Beach Clean weekend.
“Not only were we able make a real difference to area, but it gave us the opportunity to team up with our neighbours to help improve conditions for wildlife, in line with ABP’s wider commitment to sustainability and the environment.”
ABP’s team has been running regular beach cleans at Pipers Vale beach since September 2017. This litter pick is part of ABP’s wider commitment to the environment, as the company organises regular waste clearing days in areas surrounding its estate, including ‘Tidy Fridays’ across its network of 21 ports.