Dutch Ports Get Ready for a "No-Deal" Brexit 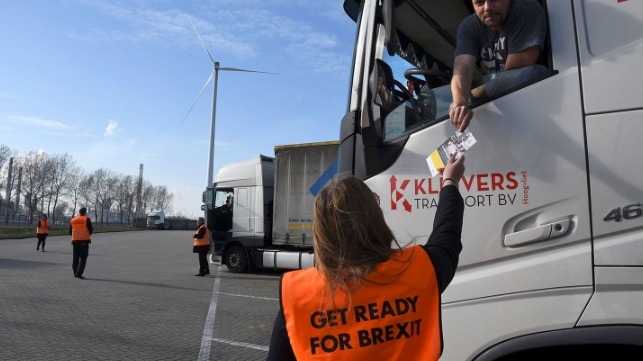 BY THE MARITIME EXECUTIVE  2019-10-10 21:13:30
Dutch port authorities say that they are working hard to get ready for traffic disruption as Britain heads slowly towards a "hard" exit from the European Union.
Brussels and London have until October 31 to reach a deal on the terms of Britain's exit from the EU, a goal that has evaded negotiators for more than two years. The timeline is ambitious, and many analysts (and several of the negotiators themselves) view it as increasingly unlikely given the wide difference in the two sides' positions. The tumultuous debate over Brexit within Britain and the strained relationship between Parliament and UK Prime Minister Boris Johnson add additional hurdles to gaining final approval.
If the UK does not secure either a deal or an extension to its exit timeline, customs procedures will apply to cross-Channel shipments effective November 1- something that most UK shippers are not prepared to handle, according to the British government. Ro/ro freight shipping, a vital part of the trade connections between the UK and continental Europe, could be heavily affected by customs delays.
Dutch Customs, the Port of Rotterdam Authority, the Port of Amsterdam Authority, port coordination platform PortBase, and local municipalities are all working together on Brexit preparations, the authorities said in a joint statement. The aim of the coordinated action is to minimize delays resulting from new customs checks at the Rotterdam and Vlaardingen ferry terminals.
In order to address congestion, the group is coming up with contingency plans for traffic management - traffic circulation plans and parking sites for trucks lacking the right paperwork - and digital solutions to ease compliance. After registering themselves and their cargoes with Dutch Customs, exporters and importers will have to register their shipments online on the PortBase portal. This will give Dutch terminal operators transparency on whether the right paperwork has been completed in advance.
Without digital pre-notification through PortBase, the trucker (and the shipment) won't be allowed into or out of the terminal. This is inconvenient for the trucker, but it will also slow down traffic flow at the gate as truckers are turned away. To avoid this problem, truckers can check online to make sure that the terminal has all the needed information before he or she arrives.