Update on the search operations for the Bourbon Rhode crew 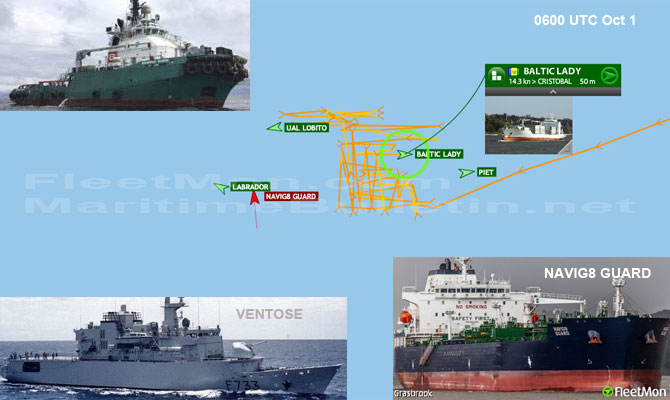 BOURBON today mourns the death of two other crew members of the Bourbon Rhode. The bodies of our two mariners were recovered at sea last night and transferred on the French navy "Ventôse" frigate. BOURBON stands by the seafarers' families and is fully mobilized to support them in this terrible time.
The research operations carried out by the French authorities with the support of the US authorities are part of exceptional measures, further intensified in recent days. Since the beginning of the operations on September 26, ten commercial vessels have been mobilized in the area. Daily overflights are performed by a Falcon 50 of the French Navy, supported by a C 130 Hercules aircraft from the US Coast Guards. The Navy frigate, accompanied by its helicopter "Panther", is at the heart of the system and coordinates the grid of nearly 40 search areas.
"On behalf of all BOURBON employees, I would like to pay tribute to the deceased sailors. Our thoughts and prayers are with the families and loved ones who are grieving over this dramatic event. We stand in full solidarity with them in this ordeal and assure them of our strongest support. Research operations are continuing on this sixth day and the mobilization of the maritime world is unprecedented. I would like to express our gratitude to all the research teams and those who volunteer " BOURBON Corporation CEO Gaël Bodénès declares.
A new update on the situation will be issued as soon as possible.


October 02, 2019 4:00 PM
BOURBON today mourns the death of another crew member following the sinking of the Bourbon Rhode in the Atlantic Ocean on September 26.
The body of this fourth seafarer was discovered yesterday and transferred on the French Navy’s "Ventôse" frigate.
"On behalf of BOURBON, I would like to express our condolences to the family and friends of the deceased seafarer. We are at their side to accompany them through this terrible ordeal. Despite significant search resources for the rescue of the crew, the fate of the missing is an ever-increasing source of anxiety for the families. We remain fully mobilized to pursue relief operations and reiterate our warm thanks to all the teams that have volunteered and are helping us in our search," declared BOURBON Crisis Cell Director Cyrille Le Bris.
Over the past 7 days, an exceptionally extensive search operation has been implemented by the CROSS French West Indies-Guyana (Regional Operational Centre for Surveillance and Rescue) and the French Navy, under the authority of the Prefect representing the State’s maritime authority, with the support of the American authorities. Significant maritime and air resources continue today to be deployed over research areas.
A new update on the situation will be issued soon.

Oct 1 0600 UTC UPDATE: On Sep 30 2 bodies were recovered by MT NAVIG8 GUARD (IMO 9833670), later transferred to French Navy ship, understood frigate VENTOSE. Frigate and her helicopter said to reach SAR area by morning Oct 1. Ships still engaged in SAR can be seen on AIS screenshot. Also deployed French Air Force plane and USCG Hercules plane.
In full: http://maritimebulletin.net/2019/09/28/bourbon-offshore-tug-reportedly-sank-3-rescued-11-probably-missing-or-dead/
Mikhail Voytenko
My name is Mikhail Voytenko, I’m Russian, professional merchant marine navigator, by education and former experience. I own and run Maritime Bulletin website for more than 10 years. I've been involved in solving a number of piracy hijack cases, including the hijack of ro-ro FAINA, loaded with tanks. It was me who made public, and unravel, freighter ARCTIC SEA mystery. I've been also closely involved in a number of maritime disaster, one of them being MSC FLAMINIA major fire.