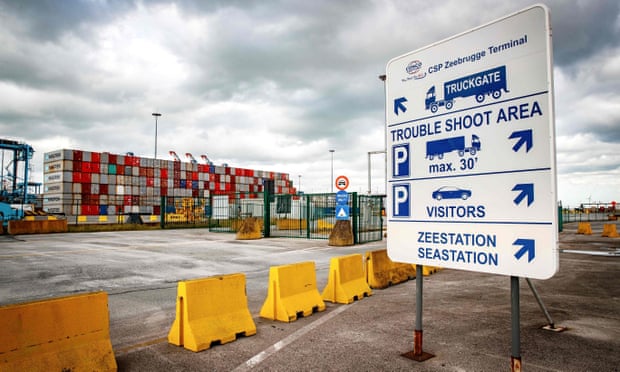 Traffic signs point to the various terminals of the Belgian port of Zeebrugge. Photograph: Kurt Desplenter/Belga/AFP via Getty Images


Just one in every 100 sealed containers at Zeebrugge are x-rayed, and none are checked for heat, according to authorities at the Belgian port through which the 39 people found dead in the back of a lorry in Essex are believed to have travelled.
Joachim Coens, the chief executive of Zeebrugge port, and Peter Degroote, a harbourmaster, defended security at the port but admitted sealed containers were not checked inside and x-ray scans were only used – rarely – to check for goods, not the presence of humans.
Questions have been asked about security at the port, from where the lorry is believed to have travelled to the UK carrying the 39 people on Tuesday. Their bodies were discovered in the back of the lorry in an industrial estate in Grays early on Wednesday. 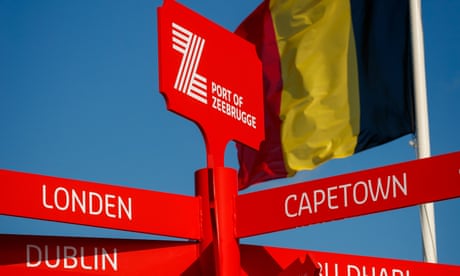 Two journeys into one: how lorry driver and Chinese nationals reached Essex

Read more
In an interview with the Guardian on Friday, Coens confirmed that the container passed through a terminal at the port, run by the company C.RO. “They, of course, do everything possible, together with us, to avoid that people are entering the terminal. That’s the main thing. You can see it’s wired, it’s fenced, it’s locked. It’s a closed terminal.”
Coens and Degroote said €1m (£860,000) was spent each year to protect the terminal, which is one of several at the port, which processes up to 7,000 containers daily and is guarded round the clock by security staff, who deploy six sniffer dogs.
Coens said police dealt “daily” with small groups of migrants attempting to cut holes in fences and gain access to the port. “They are smaller groups, people are mostly coming from conflict areas in north Africa, Eritrea, the Middle East. They [the port security] cope, in the way that they can keep the people out. If they are caught they go to the police.”
Degroote, who is one of four harbourmasters at the port, said lorries arriving with containers were photographed from all angles – “below, underneath, everything”.
Coens explained that lorries with canvas containers were checked inside with CO2 devices to see if humans were present, and sniffer dogs were also deployed.
But asked if there were any other checks on sealed refrigerated containers, Coens said there was not. “If it’s sealed in a cooled container under temperature control, no.
“The most important thing is that the terminal is completely fenced and looked at with cameras and security guys running around daily – they cost millions – to see that there’s nobody running around.
“So we, the terminal, suppose that there is nobody around and the container is closed and finished and we’re good so there is no need to open it. Because otherwise you unseal it and you have the butter or the meat, or whatever [is inside], and it contaminates and you have to seal whatever is in.”
Degroote said some containers spot-checked by police and customs officials were x-rayed, but he estimated that just 1% of trailers were subject to the procedure. “But that’s not to find people … the customs are focusing on goods. So that’s what their checks are made for.”
Coens added: “[It is] to check if you declare to bring butter and it’s not butter inside but kalashnikovs [guns].”
He said the percentage of sealed containers passing through Zeebrugge to the UK that were x-rayed was “1%, maybe. It’s a very low figure.”
Both men confirmed there were no heat scanners at the port. It has been suggested that the refrigerated container’s sub-zero temperatures may have been deliberately used to fool a heat scan.
Coens suggested British authorities should be more involved in carrying out checks. “It’s one or the other. If you do it here there should be more involvement of the UK side.”
Belgian prosecutors opened an investigation into the deaths on Thursday.
Coens – who has worked at the port for 18 years – said: “The investigation is important for us to see from the beginning to the end what happened and what could be done.
“Every time there is an incident, with every meeting we have with police and customs … we follow their instructions. It has been adapted year by year by new methods, so we adapt every time. So if there is something more we can do, we can definitely do [it], that’s for sure.”
Deegroote added: “The port is a part of the whole link. It starts where the truck leaves and we are being funnelled into the problem because that’s the point where the cargo stops. Maybe we can do more, depending on the lessons learned from the investigation.”
Nineteen years ago, 58 Chinese migrants suffocated in a lorry in Dover after travelling through Zeebrugge.
https://www.theguardian.com/uk-news/2019/oct/25/essex-lorry-deaths-containers-x-rayed-security-zeebrugge?CMP=share_btn_tw