It looks like Peel Ports may have an issue with the 5th, south-most crane on L2. Either the crane's bogie has collapse or derailed OR the ground underneath it has collapsed...

It looks like Peel Ports may have an issue with the 5th, south-most crane on L2. Either the crane's bogie has collapse or derailed OR the ground underneath it has collapsed... In this picture that Wally1 from our forums posted, is a chap in orange at the right most of the crane poking something. If you look, the bogie isn't right and there looks to be a hole.It really does look like the bogie has fallen into a hole! The port really doesn't need this right now!!The crane hasn't operated and I believe the boom is still down.

This information has come from a forum I belong to. It may be something of nothing or a major setback..........time will tell

Hearing reports of potentially another sinkhole on L2, this time under a crane boogie 😞😞 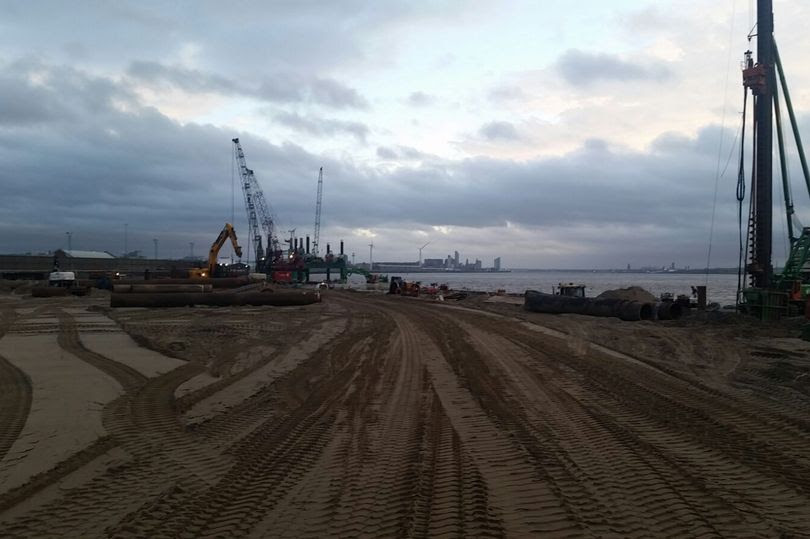 These pictures show the full scale of the sinkhole at the Port of Liverpool.
The first photograph, thought to have been taken last year, shows the newly built terminal before the hole emerged. The second picture shows the full scale of the cavity, which is over 50ft deep. The sinkhole appeared on the dock wall at the new terminal a few weeks ago. The repair job is expected to be expensive. 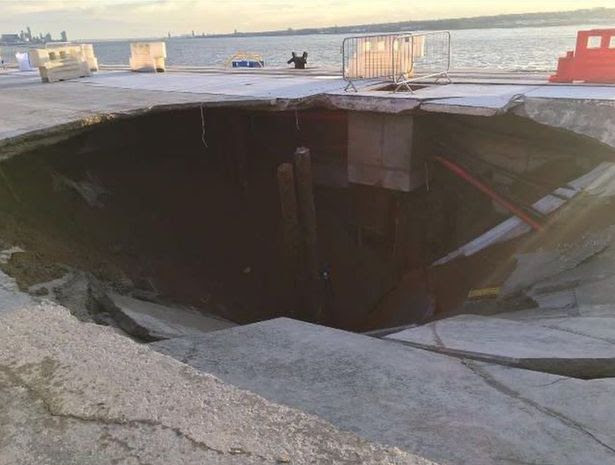 Peel has now launched an invesigation to try and find out what caused the sinkhole.
A spokesman said to the ECHO: “We are working with our contractors and technical experts to determine the specific cause of the cavity. A detailed assessment is ongoing and once the issue has been definitively identified, appropriate remedial works will be undertaken to resolve the issue.”
The area surrounding the hole was sealed off immediately and Peel have said that the cavity has not affected work at the terminal.
Work started on the new terminal in 2015, and completed in November 2016. Around 100 men worked on the project. The new port is expected to be able to handle the majority of the world’s giant container ships. The port’s landmark giant red cranes will unload the very largest ships that will berth on the Mersey. The five ‘megamax’ cranes are able to move along the waterfront.
Highways England has been consulting with Litherland residents on how to manage the increased volume of traffic passing through the area to the new port.
Click on the links below to see some interesting comments
http://www.liverpoolecho.co.uk/news/liverpool-news/before-after-pictures-show-full-12641613#ICID=FB-Liv-main
http://www.liverpoolecho.co.uk/news/liverpool-news/sinkhole-appeared-port-liverpool-12602064