OOCL United Kingdom arrives to the Port of Felixstowe, starboard side to Berth 9. 1st November 2019 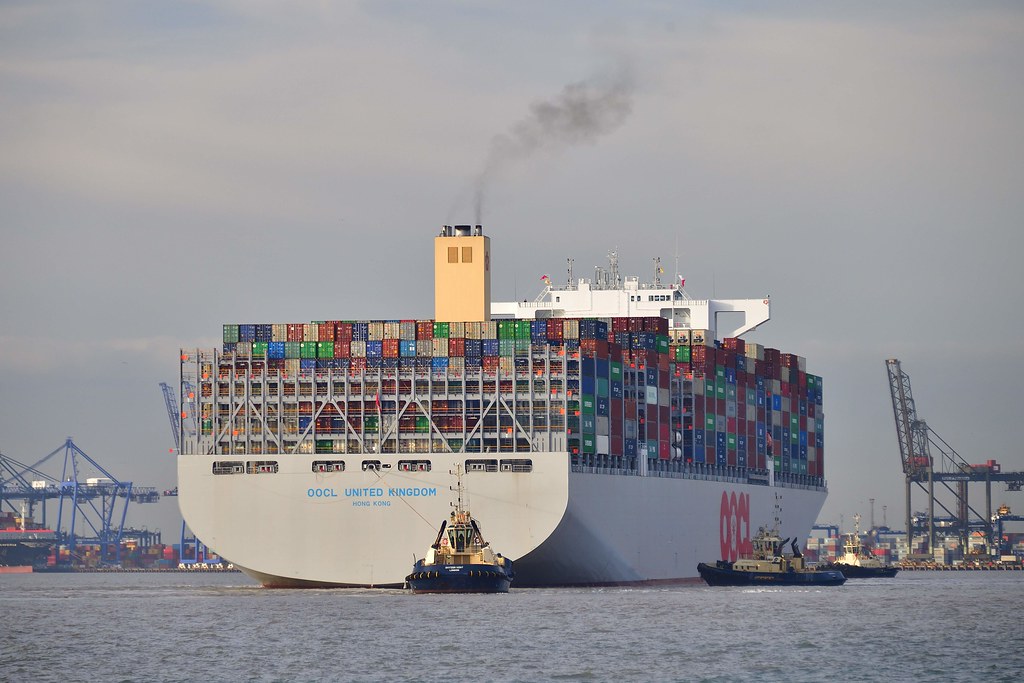 Pilot boarding 30 minutes late at the Sunk Pilot Station. 14:00 instead of 13:30, Maersk Ensenada was late breaking away from the berth causing a knock on effect. Maximum draught 14.85 metres from Singapore with no defects, planned starboard side to Felixstowe berth 9. Pilot requests three tugs for berthing. First at 7&8 to make fast centre lead aft ready for powered indirect. Second at Platters to standby on starboard quarter then around the stern to the portside to make fast, third inside the harbour bow to bow. The pilot queries about which side to, as a Lifeboat was meant to be delivered but was not going to happen. Harwich VTS confirms that Felixstowe Dock tower still wanted them starboard side to. Svitzer Kent - centre lead aft 95 tonne bollard rating, Svitzer Sky escort on the starboard quarter around the Beach End then break away from the ships side to go around the stern to make fast port quarter near funnel, Svitzer Deben - centre lead forward. Straight on to Felixstowe Berth 9. Sky pushes her towards the berth while Kent and Deben pull her towards the berth. Seacat liberty passes through the harbour for Harwich Navyard as the OOCL United Kingdom pushes up to the berth. Normal tie up would have been 6 and 2 each end. Final tie up 10 and 4 each end with springs first. Extra lines were put out due to the high winds expected during Saturday. Winds were forecasted to be gusting up to 70mph or 31.2mps for several hours. Cranes at the port were boomed up while the worst of the winds blew through. Finally when the wind dropped to a safe level cargo operations began to pick up pace.