Soren Toft, the former Chief Operating Officer of A.P. Moeller-Maersk, will become CEO of Mediterranean Shipping Company (MSC), according to reports from ShippingWatch and CNBC.
Port Technology International reported on November 11 2019 that Toft had stepped down. Maersk said that he had done so to pursue opportunities outside the company.
ShippingWatch now says, by citing unnamed sources, that he has agreed to join MSC and that a formal announcement will be made next week.
MSC is the second-largest container shipping line in the world by market share, behind Maersk in first and ahead of Chinese state-owned COSCO in third.
It has in recent years made great strides towards closing the gap on Maersk with its new 11 strong fleet of mega-ships, the largest of which, the MSC Gulsun, completed its maiden voyage in September 2019.
Once the whole fleet is operational, MSC could become the world’s largest carrier by capacity.


Toft move a dawning of new era at MSC 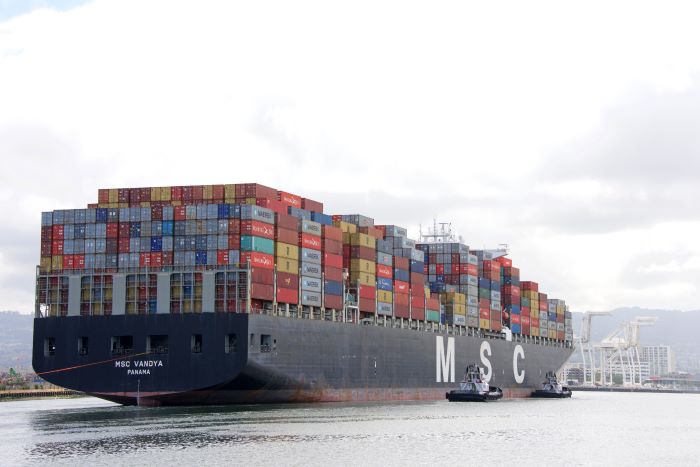 All signs point to an announcement coming soon about ex-Maersk COO Søren Toft joining rival Mediterrean Shipping Co. as CEO. Photo credit: Shutterstock.com.
Søren Toft joining Mediterranean Shipping Co. as CEO would be the biggest change at a company that has been private and family-run since its founding 50 years ago. The former Maersk COO, who left the world’s largest container line Nov. 11, brings experience at a transparent, publicly traded company to the most private company in shipping. He comes from a company that has grown by acquisition to one that has been built organically. And he comes from a carrier pursuing a radical transportation into an end-to-end logistics provider to one that for the most part sticks strictly to the bread and butter of container shipping.
As reported by multiple media outlets, Toft is taking the CEO job at rival MSC. It would be the first time in its 50-year history that the Aponte family firm has brought in an outsider to head what is now the second-largest container line in terms of deployed capacity.
The current president and CEO of MSC is Diego Aponte, son of chairman Gianluigi Aponte, who founded MSC in 1970. The Wall Street Journal reported Gianluigi would step down and hand the chairman’s job to Diego.
Toft abruptly resigned from Maersk Nov. 11, telling reporters he would be taking on a CEO role, but declining to provide further details. A spokesperson for MSC declined to comment, but one well-placed source told JOC.com Toft would be taking the helm of MSC and that an announcement would be made soon.
“It is a done deal,” a container shipping executive told JOC.com. “I believe he will have a 12-month cooling-off period first.”
Company moves at top management levels are usually accompanied by non-compete periods of “gardening leave,” so even if Toft does take the top position at MSC, it could be some time before he hangs his coat in the corner office.

It is impossible to overstate the differences between the company and culture Toft will enter, and the one he leaves behind.

Maersk, for starters, has grown through acquisition, swallowing large and mid-sized competitors such as Safmarine, P&O Nedlloyd, Sealand, and most recently Hamburg Sud. MSC has quietly taken stakes in a few forwarders such as Savino Del Bene, but not as part of a broad strategy, and has made no acquisitions in container shipping, growing organically over the 50 years since its founding. That means Maersk, although Danish-led at the top, is a mix of individuals from various corporate backgrounds, while MSC leadership has almost exclusively come up from within the ranks of the company.
Strategically, although they cooperate as part of the 2M alliance, the No. 1 and No. 2 carriers are also night and day in how they approach the market. Maersk has long been an establishment carrier, a core member of former shipping conferences such as the TAA in the trans-Atlantic in the 1990s, and an industry pacesetter in areas such as environmental sustainability. MSC, which was an upstart outsider in its early days, has never forgotten its roots as a non-vessel-operating common carrier (NVO), having initially had little access to direct beneficial cargo owner (BCO) cargo and thus maintains to this day deep-rooted loyalty to its NVO accounts. In doing so, it has made clear on many occasions that having built its company on the back of NVO cargo, it would not then turn around and compete with them on their own turf.
Maersk has long had a more tenuous relationship with NVOs, needing their cargo as NVOs have steadily grown in importance over the years, but not unwilling to edge in on their turf. This was seen most dramatically in the Maersk integrator strategy where it is seeking to challenge NVOs as an end-to-end provider of transportation services, complete with offerings including warehousing, inland transportation, and customs brokerage.
While Maersk through its strategy sees the opportunity to create value for customers through enhanced supply chain services, MSC has long taken a more confrontational-at-times attitude toward shippers, occasionally in past years seeing the relationship more as a zero-sum game where the shipper’s gain is the carrier’s loss, and vice-versa. It has clashed openly with some shippers in the past. But in a larger sense, while Maersk has appeared to alter course on multiple occasions over the years, MSC has been more consistent in its strategy, growing into new markets as it sees opportunities, building long-term relationships with key customers — despite knocking heads occasionally — and casting those relationships as an extension of the Aponte family, which describes its employees and customers as an extension of its own family. With a greater degree of turnover — starting with a string of CEOs, but also many upward and lateral moves among key executives both at headquarters and in the regions, as is customary at large corporations — Maersk has been more process-focused and arms-length in its relationship with the market versus MSC.

MSC sees need for outside experience

But Toft inevitably was brought in to usher in a new era at MSC. MSC turned to an outsider not because it lacks leadership potential within its own ranks — it has several senior executives in Geneva, including top line manager Caroline Becquart and COO Claudio Bozzo, the former head of MSC USA, who have been with the company for years and, in some cases, decades — but rather to bring in experience that MSC does not possess in-house but needs going forward.
For example, Toft brings management experience as a member of the executive board of a publicly traded company. At Maersk, regular external communication, whether to investors, media, policymakers, or other stakeholders is part of the company’s DNA. MSC, while becoming more active in marketing and communications over just the past few years, remains doggedly private, beginning with its status as a privately held company that is not required to release financial information and, in fact, over the years has released next to nothing — not even annual revenues, which are believed to be well in excess of $30 billion per year when taking into account the core ocean container business, terminals, and MSC Cruises. It was unclear whether Toft would run the cruise business or whether MSC may be considering breaking that out into a separate company.
While MSC has been content to lay low, following other carriers (such as Maersk) in ordering mega-ships or making bold and risky moves in technology, such as its decision to participate in the Maersk-led TradeLens, Maersk over time has become even more aggressive in positioning itself as an industry leader, perhaps no more so than in environmental sustainability. MSC has been low-key in the face of growing dialogue around decarbonization, for example emphasizing the efficiency of its largest vessels, while Maersk made the risky but groundbreaking commitment to fully decarbonize its operations by 2050 and deploy the first commercially viable zero-carbon ship by 2030. Toft was the face of Maersk on those initiatives.
While Toft will enter, and lead, an organization and a culture foreign to his experience in many ways, it is likely Toft, rather than MSC, who will be forced to adjust — at least initially. The Aponte family would not be bringing in Toft because they are unsuccessful; on the contrary, it would be hard to argue that MSC has been anything short of spectacularly successful over the past half century, starting from scratch and emerging as the second-largest container line and one of the world’s largest privately held companies. It did that by being bold, visionary, hands-on, and willing to take risks. Its approach of avoiding big bets on strategy or technology has proven prescient, at least so far. Toft can only be seen as someone able to take the company forward, building on what’s been achieved so far.