Artist Impression of the design of Seaforth Dock from 1967.

Artist Impression of the design of Seaforth Dock from 1967. few changes to what was built other than lack of railway connections that were added in the late 70's and the bridge over the Seaforth passage. Sadly the quayside rails never saw a train and the majority were removed when the S3 berth was block paved. Gladstone No 3 reverted to general cargo.
— with Seán Seosamh Robertson.

Ships of the Mersey

20 YEARS AGO 500 LIVERPOOL DOCKERS WERE SACKED FOR REFUSING TO CROSS A PICKET LINE. NOW THEIR SPIRIT IS REMEMBERED IN A GIG WITH THE LIKES OF RICKY TOMLINSON AND JOHN BISHOP

For those who fear communal solidarity no longer exists here’s a tale to lift the spirits.
When five men were sacked in an overtime row 20 years ago, 500 Liverpool dockersrefused to cross a picket line. Despite being described by Lloyds List as “the most productive workforce in Europe” they too were sacked. 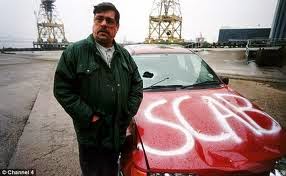 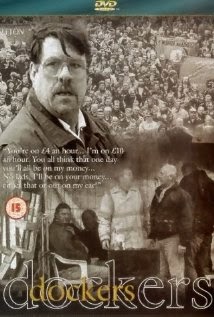 Their 850-day dispute became one of the longest in British labour history. With the men risking everything to uphold the most sacred of trade union principles, it was also seen across the world as one of the most noble.
On day one American longshoremen on both coasts and Australian wharfies brought their countries’ ports to a standstill.
On other days every Japanese docker stopped working and in South Africa all ports were closed down “in solidarity with the Liverpool dockers who stood by us during apartheid”.

At home acts like Jo Brand and Noel Gallagher did fundraisers, footballer Robbie Fowler was fined by Uefa for unveiling a dockers’ T-shirt and support groups the length of Britain swung behind the sacked men.
But with the TGWU neutered by Thatcher’s anti-union laws the dockers eventually lost. One legacy of that defeat is those zero-hours contracts that blight so many lives today.
Yet the solidarity never waned. Under the tutelage of Jimmy McGovern some of the dockers wrote a drama about the dispute for Channel 4, using the £130,000 fee to buy a building in the aptly-named Hope Street. They turned it into a communal hub. A not-for-profit bar, function room and advice centre. An open house for anyone in need of help or radical stimulation. A lasting memorial to the spirit of solidarity shown in their dispute.
Downstairs it hosts everything from Greek theatre and salsa to pensioners’ meetings and political forums. There’s an exhibition about the Spanish Civil War. I even had my wedding do there.

Upstairs they give free expert advice on benefits, employment, asylum, debt and welfare to anyone who walks in off the street. Over the past 15 years it’s estimated more than £10million-worth of advice has been given to people in desperate need.
But due to loss of funding and rent, The Casa faces an uncertain future. They could keep the bar open but unless the rest of the building is used to fight for social justice they feel they’d be betraying their founding principles.
So they won’t do it.

Before Christmas it looked like The Casa had only months left, until solidarity came to the fore once more.
Phone calls to comedians John Bishop, Ricky Tomlinson, Neil Fitzmaurice and Mark Steel and to musicians The Farm and John Power gave us a line-up. Another call to the 1,600-seater ­Philharmonic Hall gave us a venue.

All of them agreed, in a ­heartbeat, to do their bit.
And so we have The Casa ­Solidarity Show on Friday April 17, the tickets for which go on sale today at the Liverpool ­Philharmonic website.

When Liverpool Dockers refused to cross a picket line on 29 September 1995 and were immediately dismissed by Mersey Docks and Harbour Company, no-one could imagine the full consequences. Port after port joined the fight against casual labour and deregulation as dockworkers around the world recognised that they confront the same issues in a global industry.
This website traces the Liverpool dispute and the growth of an international dockers movement, as they unfold. You can begin anywhere. 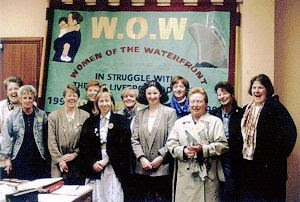 The Liverpool dockers refused to cross a picket line set up in support of a group of fellow dockers working for Torside. That was on 29 September 1995, and they were sacked by their employers. Some dockers were offered new contracts but all contracts were subject to alteration by the MDHC, so the dispute began. Over the next two and a half years the dockers waged a very high profile public campaign for their reinstatement, and allied themselves with dockers worldwide and support groups such as Reclaim the Streets. The strike failed in its declared objectives, but was very successful in providing a modern example of strong social movement unionism in the United Kingdom. A t-shirt was designed to show support for the dockers incorporating the Calvin Klein 'CK' into the word docker.[1] The t-shirt was worn by many celebrities but most famously by Robbie Fowler during a goal celebration while playing for Liverpool F.C..
The dispute went on to be one of the longest in British industrial relations history. It was in February 1998 that the dockers finally accepted a settlement.
After the dispute some of the dockers bought the Casa Bar on Hope St. in Liverpool town centre.[2]
on January 12, 2020