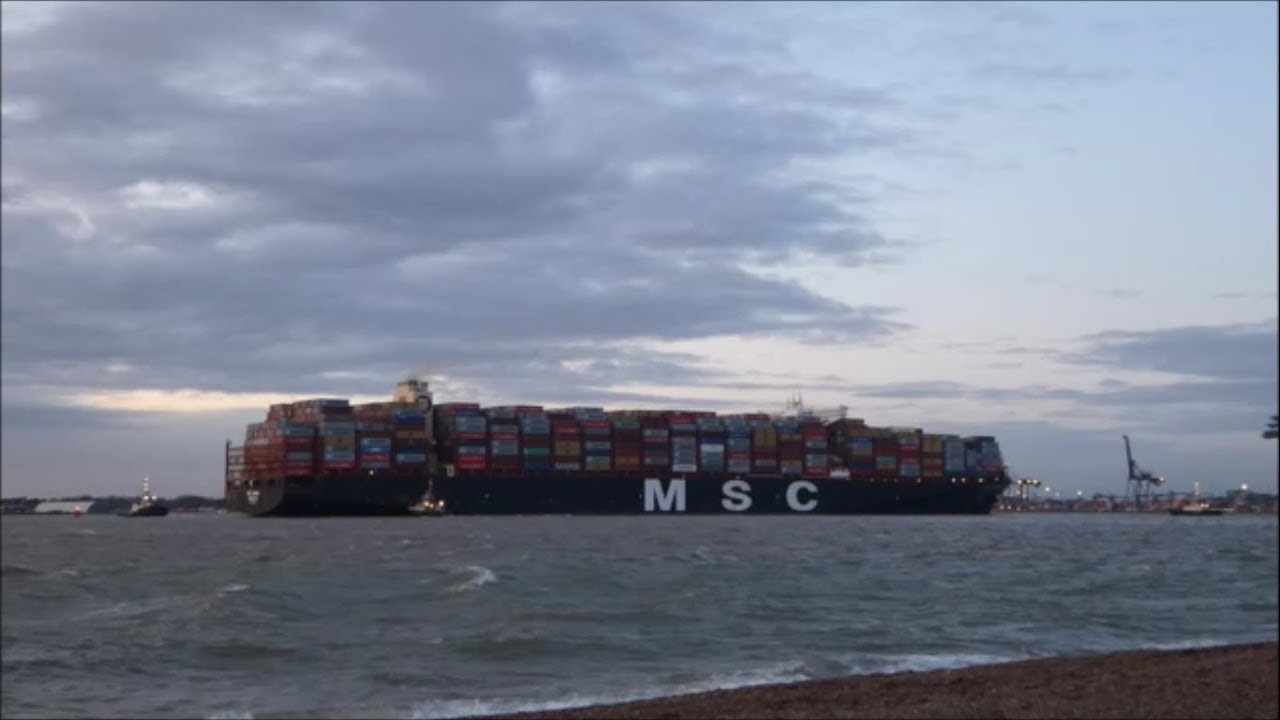 MSC Anna IMO: 9777204 Length: 399.98m Breadth: 58.8m Built: December 2016 19,437TEU Gross tonnage: 187,587t Current draught: 15.5m Wind speed: 26-35 knots Direction: WNW 299° Tide: 2.94m, 36cm above prediction. Last port Tanjung Pelepas Next port: Rotterdam Tugs assisting: Svitzer Deben - centre lead aft Svitzer Sky - starboard quarter Svitzer Shotley - centre lead forward The 400 metre MSC Anna arrives to the Port of Felixstowe straight from Tanjung Pelepas in Malaysia. This was unusual, as a ship on this route calls at Rotterdam before sailing across to Felixstowe with a considerably reduced draught. As she tracked through the English Channel, a band of squally showers from the west was rapidly spreading across the UK. As the MSC Anna made her approach to the Sunk, the winds began to increase from the West. A Harwich Haven Pilot launch makes their way to the Sunk Diamond to board a pilot onto the deep draughted MSC Anna.

Once the pilot was onboard, he radios Harwich VTS to confirm he was onboard with a maximum draught of 15.5 metres from Tanjung Pelepas with no defects, inbound for Felixstowe Berth 9. VTS replies that there was a ready berth planned port side to Felixstowe Berth 9 and updated the situation with the tugs. As the Selandia Seaways was inbound for Felixstowe Ro-Ro4 and with the wind increasing to up to 35 knots, the captain requested a Svitzer tug for berthing so there was only 3 tugs available. VTS continues with weather report. The winds were increasing but they would be short lived and should last for about an hour before receding to under 30 knots. Currently the winds were Westerly 26 gusting 35 knots. With the weather how it was the pilot deemed it unsafe to make her approach so reduced speed to a crawl and assessed a little while later. Winds decreasing, the pilot said that he would still make a slow approach to the deep water channel. If the wind stayed at that strength, there would be no choice than to have all 4 tugs but as it died off he would require 3.

First to meet at 7&8 buoys and make fast centre lead aft, second by the Platters to escort on the starboard quarter and the third inside the harbour bow to bow. At the present time the pilot didn’t know which way they were going to swing and would make a decision when they were in the harbour. Duty tug copied the conversation. Svitzer Deben leaves the tug pontoon to the aft tug. Svitzer Sky leaves Ro-Ro3 to be the quarter tug and Svitzer Shotley leaves the tug pontoon to be the forward tug. On approach to the harbour, the pilot gets in contact with the Deben and goes through the plan of berthing. Sky makes her way out of the harbour to standby on the quarter. Once the Deben was fast aft the pilot gets the Deben to move out onto the port quarter for a powered indirect to help steer the MSC Anna around the 90° Beach End turn into the harbour. Sky makes fast on the starboard quarter as they round the Beach End . Entering the harbour, the pilot decides that they would be swinging to starboard off the berth. Shotley makes their approach to make fast on a bow to bow to pick up the centre lead forward. The main engine stopped, the pilot gets the Deben to favour the port quarter to straighten her up as she began to twist. Shotley fast forward moves out on to the starboard shoulder and builds weight to also straighten her. Drifting into the swinging position, the Sky squares up on the quarter and builds power. All three tugs build further weight on their tow lines to swing her to starboard. After a while, the pilot gets the Shotley to stop towing and come in for a push towards the berth. Deben moves around to the starboard side into a check position. Shotley moves away from the ships side into a check position as she edges towards her final berthing position alongside Felixstowe Berth 9. Final tie up 6 and 2 each end with springs first fore and aft. ETD 15:00 Sunday 19th January 2020