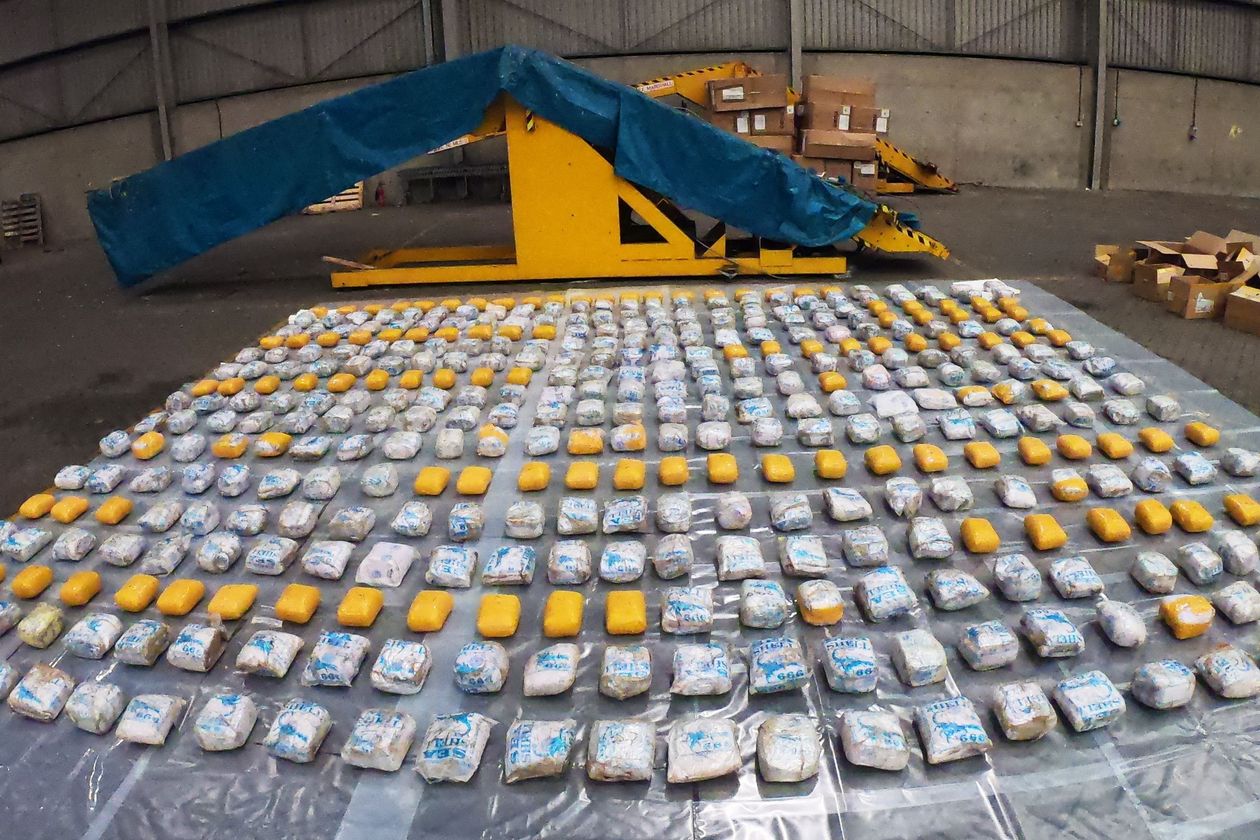 Global shipping companies are wrestling with apparent growing demand in a sector that they don’t want and that has law enforcement authorities around the world on high alert.
Ocean carriers saw a series of seizures of large shipments of drugs in the U.S. and Europe in 2019, and officials say they are a sign of the growing use of commercial shipping operations for increasingly large loads of cocaine, heroin and other drugs. Officials say the growing scale of shipping operations, with the biggest container ships doubling in size over the past decade, has made it an attractive target for drug traffickers.
Ship operators are under pressure to deliver vast amounts of cargo on time, and the rule of thumb around the world is that only one in 10 containers gets checked as boxes move quickly through ports and into sprawling, complicated logistics networks.
Containers are also the cheapest way to ship cargo. It can cost up to $1,500 on average to ship a box from South America to Europe or the U.S.


“It’s remarkably cheap, and economies of scale work for both legal and illegal cargo owners,” said Andrew Kinsey, a senior marine risk consultant at Allianz Global Corporate & Specialty, the commercial-insurance arm of German insurer Allianz SE. “Giant boxships now make the movement of illegal cargoes more reliable and more difficult to detect.”
Seizures of cocaine aboard commercial ships and private vessels world-wide more than tripled over the past three years, to 73.2 metric tons in 2019 from 22.4 metric tons in 2017, according to Resilience360, which monitors risk and disruptions across supply chains and is owned by German logistics company Deutsche Post DHL.
For ocean carriers and their shipping customers, the moves by drug smugglers to piggyback on their operations raises new concerns for international supply chains. The drive to stem the drug flows is raising costs and slowing shipments while highlighting the tough security questions that are arising as operators pursue greater size and speed.
An official at the Port of Antwerp in Belgium said officers there rely on cargo declarations to allow incoming boxes to move out of port.
“Ships line up to dock and unload and they are all in a hurry. If you don’t have information about a specific box, it’s like looking for a needle in a haystack,” the officer said, asking not to be named because he isn’t authorized to speak to the media.
Antwerp is one of Europe’s biggest ports, handling more than 11 million containers a year. Customs agents there seized around 50 tons of cocaine in 2018, 22% more than in 2017 and six times more than in 2013.

Other ports chosen by smugglers include some of Europe’s biggest entry hubs including Rotterdam, Hamburg and terminals in Spain and the U.K.
“We see a lot of seizures all over Europe, which is an attractive destination because the street value of drugs is higher than the U.S.,” said Shehrina Kamal, a risk monitoring director at Resilience360.
Once the contraband containers leave port on trucks or rail, the chances of being discovered drop even more as there are no border checks among European Union members.
Cocaine increasingly also is being moved by ships doing regional South America sailings. Brazil’s Department of Federal Revenue said in November that cocaine hauls at the country’s ports jumped 50% on year in the first 10 months of 2019 compared with the same period the year before.
The issue drew attention last June when U.S. Customs and Border Protection agents made their biggest-ever cocaine seizure. Agents hauling in 20 tons of the drug found aboard the MSC Gayane, a 1,031-foot-long container ship that had started its trip in Chile and was heading into a stopover in Philadelphia before a planned sailing across the Atlantic Ocean for calls in Rotterdam and Antwerp.
The ship was operated by Switzerland-based Mediterranean Shipping Co., the world’s second-biggest liner company. The seizure proved costly to MSC, taking a big boxship out of operation for several weeks during the investigation while customer cargoes were delayed.
The probe also found deeper concerns in the trade. Authorities said their investigation showed several crew members were involved in getting the cocaine on board, and they used the ship’s crane to bring in sacks of cocaine from smaller vessels off the Peruvian coast.
Shipping and law-enforcement officials say they believe about a third of cocaine cargoes from South America are moved across the world on commercial ships.
That reflects a shift in the way drugs have long been distributed.
U.S. Customs officials say traditional methods, like small planes operating from private airstrips, speed boats and mini submarines are still being used, but that smugglers are putting more faith than ever in the big supply chains that have grown in the era of trade globalization.


The world’s biggest liner operators have all been hit with drug cases over the years, and halting the trade looks like a nearly impossible task.
Heroin also is being moved on boxships. In August, the U.K.’s National Crime Agency seized a record 1.3 tons of the drug in a container aboard the Maersk Gibraltar—operated by Danish shipping giant A.P. Moller-Maersk A/S—at the U.K.’s biggest seaport, the Port of Felixstowe.
The container was returned to the vessel, shipped to Antwerp and sent by truck to a warehouse in Rotterdam, where police arrested four people they said were tied to the shipment.
Law enforcement and shipping executives say one way to curtail drug cargoes is to change the risk calculation for smugglers by checking at least three of every 10 containers before they are loaded on ships, or three times more than the current checks.
“The way the current supply chain is structured is designed for just-in-time delivery,” Allianz’s Mr. Kinsey said. “It’s the responsibility of the entire supply chain to check cargo, which currently amounts to cursory oversight.”
Of course, that would also mean slowing down commercial shipping operations that form a backbone of the global economy, providing a tough question for shipping companies and public policy makers alike.
Write to Costas Paris at costas.paris@wsj.com
https://www.wsj.com/articles/global-shipping-faces-troubling-new-smuggling-questions-11578330634