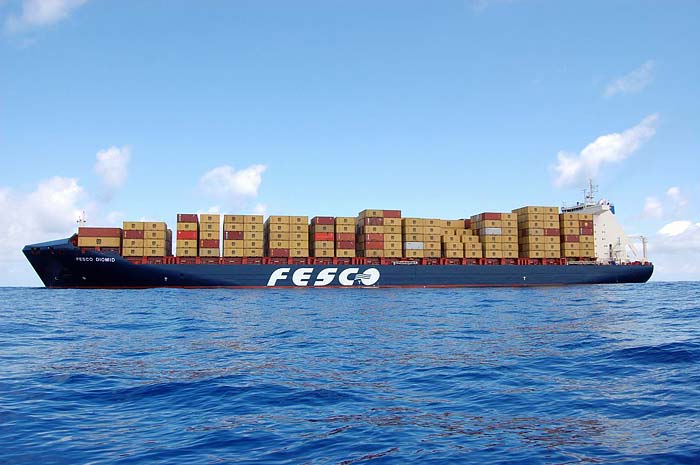 DP World’s on/off romance with one of Russia’s top maritime brands is back in the news. Russian newspaper Vesti Finance is reporting the global terminal operator has tabled a bid to take a 49% stake in Vladivostok’s Fesco Transport Group. Officials at DP World’s Dubai headquarters have yet to reply to questions sent by Splash earlier today.
Fesco is one of the largest private transport and logistics companies in Russia with assets in ports, railways and a sizeable fleet comprising of eight multipurpose vessels, 13 containerships and one OSV.
The Dubai transport giant has been chasing a stake in Fesco for the past three years. In January 2016, DP World formed DP World Russia, a joint venture with Russian Direct Investment Fund, looking at Russian transport investments and in May the following year, Splash reported Summa Group, the holding company of Russian billionaire Ziyavudin Magomedov, was negotiating selling DP World a minority stake sale in Fesco, in a deal that the Russian government vetoed at the time on the grounds that it did not want to sell a stake in a port to a foreign company.
In 2018, Magomedov, the top shareholder in Fesco with a 32% stake, was arrested on corruption charges, which he continues to fight.
In the intervening years since DP World first started negotating with Fesco in 2017, the Middle Eastern company has diversified massively from its Jebel Ali port roots, buying boxline Unifeeder as well as OSV giant Topaz among a host of non-terminal investments to stretch its business line across more of the global supply chain. Last week, DP World invested in a Swiss terminal operator.
Commenting on DP World’s investment strategy, Splash columnist Kris Kosmala said today: “When DP World announced the acquisition of Unifeeder, it looked like a case of random diversification. A few more acquisitions along the way and the broader strategy now appears for all to see. We now have a supply chain logistics, not port, operator holding strategic assets spanning Asia and Europe trade along the northern link running from the port of Vladivostok to Swissterminal dry ports to the ports on the Atlantic, conveniently served by Unifeeder and P&O Ferries.”