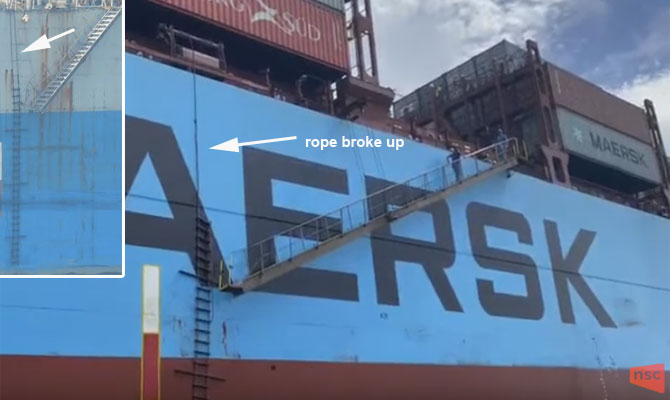 Pilot boarding container ship MAERSK LETICIA at Itajai, Brazil, on Jan 31, had a harrowing moment, when one of two of securing ropes broke up, while he was still climbing ladder, preparing to step onto accommodation ladder. He managed to keep the balance, and safely completed boarding. Second pilot aborted boarding.
On Dec 30 2019 pilot fell into water and died while boarding MAERSK KENSINGTON in New York.
MAERSK is the most avid advocate of “green sustainable shipping”, “zero emission ships” and the rest of climate change kit, busily saving the planet from non-existent threats. Advise to leave planet be, and attend to more insistent problems at hand, however trivial they may look like in comparison with saving the planet. Safe boarding, for one.
Container ship MAERSK LETICIA, IMO 9526916, dwt 106043, capacity 7450 TEU, built 2011, flag HK, manager MAERSK LINE A/S.