Topics: Baltic Lift, Hafen- und Seemannsamt, Hebo Lift 9, Jumbo Vision, Liebherr harbour cranes, Rostock, rotterdam
The “Hafen- und Seemannsamt” (Harbour and Seamans Office) in Rostock has announced today that the ‘Hebo Lift 9’ is being mobilised in Rotterdam to lift the two Liebherr harbour cranes that have been submerged in Rostock harbour since the incident during cargo operations on the Jumbo Vision earlier this month.
The ‘Hebo Lift 9’ is a large shearlegs crane with a lift of 800t to a height of 67m. The crane is due to leave Rotterdam for Rostock tomorrow, Wednesday 19 February. The voyage is due to take 5 days.
The 200t lift ‘Baltic Lift’ floating crane from Baltic Taucherei has been on site since the incident occurred and will be used to carry out preparatory work on the two lattice masts, 50m long and weighing 35t, permitting the salvage operation to start immediately the ‘Hebo Lift 9’ arrives.
It is planned that the salvage operation will be completed by the end of February. 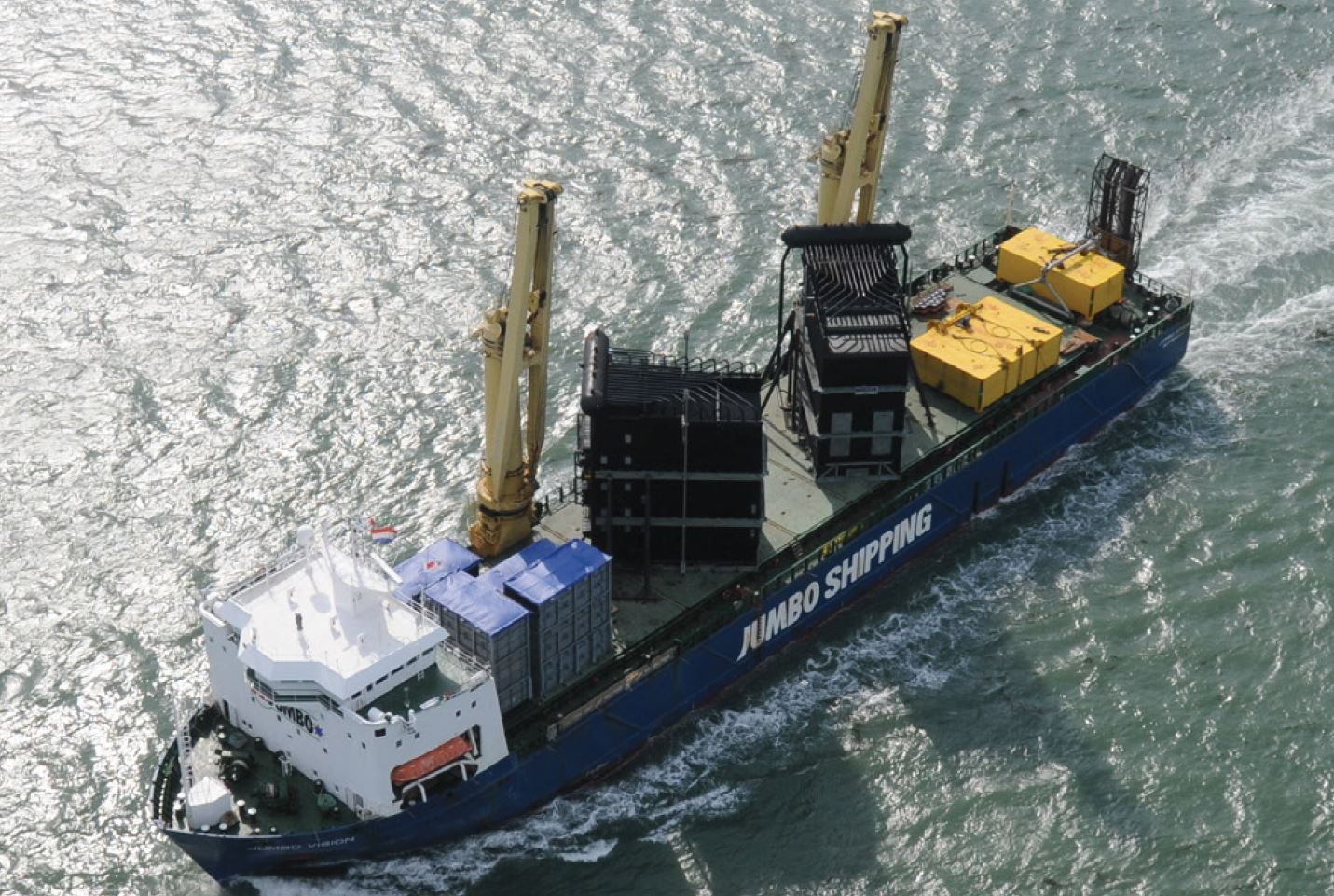 Part of Rostock Port has been closed after two mobile harbour cranes fell off the heavy-lift vessel Jumbo Vision during loading operations. Because there are fluids leaking from the cranes, port basin B has been temporarily closed and secured with oil barriers to prevent further pollution.
The incident occurred on Friday, January 31st around 21.00 while Dutch shipping company Jumbo Maritime was loading mobile harbour cranes at Liebherr’s manufacturing facility in the port. Eyewitnesses told local media that one of the harbour cranes on deck was tipped over by one of the shipboard cranes of the 6993 dwt heavy-lift vessel. This caused the vessel to list after which the second crane on deck lost stability as well.
In a comment to Project Cargo Journal, a sister publication of SWZ|Maritime, a spokesperson of Jumbo Maritime says the cause for the accident is still under investigation. ‘During loading, the cranes rolled off the deck, subsequently into the water due to reasons yet unknown and currently under investigation.’

According to a dock worker, quoted by German media, the loading operation of the two cranes had in fact already been completed when the accident occurred. One of the ship’s cranes probably hit one of the two Liebherr cranes (type LHM 550) when turning back to its starting position, causing it to fall overboard.
A spokesman for the shipping company told Nieuwsblad Transport that this portrayal is ‘probably not quite correct’, but confirms that first the front and then the rear Liebherr crane went overboard.
Two workers sustained minor injuries and were treated by paramedics on site, the shipping company confirms. According to Nieuwsblad Transport, the ship itself has also been damaged and cannot leave for the time being.

The Rostock port authority took swift action by laying out oil barriers. Specialists from Baltic divers were called in to skim a ‘relatively small amount of leaked pollutants’ from the port’s waters. The port authority and water police estimate that around 100 litres of oil have leaked from the crane, the majority of which could be sucked off by the oil-defence vessel Flunder.
During a dive, the exact location of the cranes was explored and the ventilation ports on the hydraulic oil and diesel tanks were sealed to prevent further pollution. In total, the cranes carry around 7600 litres of hydraulic oil and 3000 litres of diesel fuel.

Salvage preparations are in full swing. The oil tanks of the cranes will soon be emptied. Meanwhile, a survey vessel has made 3D-scans of the area to document the damage to the cranes, reportedly worth about 3.5 million euros each, and identify reliable lifting points to remove the cranes from the port basin which is about eleven metres deep. The cranes reportedly weigh about 440 tonnes each.
In the coming days, all necessary measures will be summarised and coordinated in a detailed salvage concept, Rostock Port states. ‘As the port operator we are working in close cooperation with the authorities to find a solution for the early resumption of port operations in port basin B,’ says the port’s managing director Gernot Tesch.
Liebherr was not available to comment on the incident.
Picture by Hafen- und Seemannsamt Rostock.
This article first appeared on Project Cargo Journal, and was re-published here with additions from Nieuwsblad Transport, both sister publications of SWZ|Maritime.