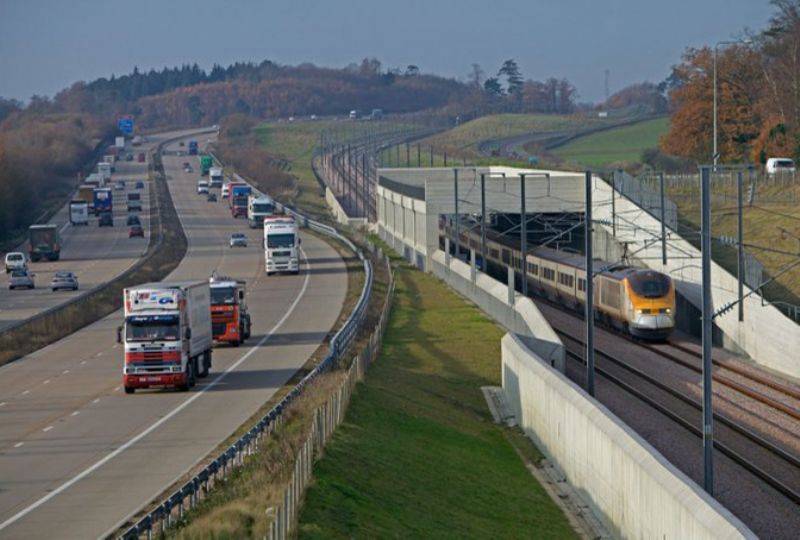 UK – The government has announced that a concrete barrier that can be set up within hours to keep Kent's roads moving at times of cross-channel disruption will be available and on standby from later this year. The barrier, which has been developed as a solution to handle potential traffic disruption from the ports in Kent, has been welcomed by the Freight Transport Association (FTA) which says that it is promising news for businesses in the county, and for hauliers who need to keep goods moving between the UK and the Continent.

Once a specialist vehicle is in place, Highways England says it will be able to deploy the moveable barrier on the M20 swiftly and safely to look to ensure minimal disruption to motorists. This is seen as a marked improvement in comparison to Operation Brock which required a month of overnight closures to deploy the metal barrier required for the contraflow system previously used.

The technology will be designed to ensure that the M20 is kept open at times of disruption, whilst also allowing the motorway to retain 3 lanes, a hard shoulder and 70mph speed limits in both directions during normal traffic conditions. Some of the problems associated with Brock may however remain.

The new solution means that Highways England’s work on an ‘off road’ replacement for Operation Stack has been stopped. As part of this, previous Highways England plans for a new large lorry holding area in Kent (you remember, the one thrown out by the Court. Ed) are no longer being pursued. Transport Secretary Grant Shapps said:
“After listening to frustrated residents and businesses affected by Operations Brock and Stack, we’ve invested in a new solution to boost Kent’s resilience and keep its vital road network moving, even at times of disruption.

Moveable barriers are already used in cities around the world, including Auckland, Sydney, San Francisco and Vancouver. The technology has been chosen by the Department for Transport and Highways England as a long-term solution to Operation Brock and Stack and says it will aim to ensure Kent is prepared for any disruption on the short strait, such as from industrial action or bad weather. The FTA’s Policy Manger for the South East of England, Heidi Skinner, commented:
“No operator wants to be stuck in slow moving or stationary traffic, and today’s announcement will come as a welcome respite for those concerned about the impact of potential delays on the UK’s supply chain from the Continent, as well as on businesses and residents in Kent.

“However, there is more to be done to ensure that the new system will work in the best way possible and manage the congestion any form of cross-Channel disruption can cause, and we look forward to working with Highways England and the DfT on this.”

The Road Haulage Association (RHA) has additionally urged the government to fully prepare businesses for new customs procedures to avoid traffic chaos in Kent, with RHA Chief Executive, Richard Burnett saying that giving businesses the clarity and time to gear up for new border processes is key to keeping traffic and goods moving. Burnett added:
“Government must announce when industry can expect to see what customs operating procedures will look like so firms can get on with preparing for new trading realities. We need the guidance to be clear and we need it immediately.”