What the Mersey tells us about Brexit 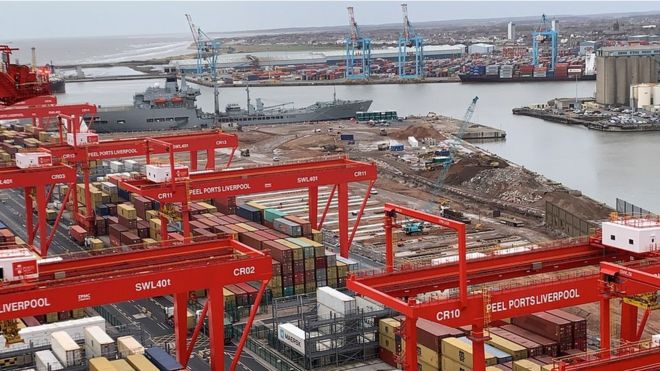 By Faisal IslamEconomics editor
After three years of Brexit fog, there are now some significant economic choices and trade offs.
And you don't have to go far from the Mersey estuary to see them all clearly.
At the famous Port of Liverpool the big hope is Brexit can thrive from a boost in transatlantic trade, as the UK uses the freedom it is regaining to run its own trade policy.
Here they already handle imported grains and biofuels from the USA. The bosses, while cautious, think that there will be much more growth.
"Places like Liverpool could benefit from a free trade deal with the US, we are the number one port for grains imported from the US, we know that's a market they wants to grow," said Stephen Carr, group commercial director of Peel Ports.
"What we're doing is trying to anticipate benefits as a result of Brexit, how trade flows might shift, and adjust our strategy accordingly."

There are plans here for a new facility for the processing of imported US grain. Giant automated container handling technology is also being shipped in from China to handle the world's largest container vessels.
Here they say free ports, and low-tax enterprise zones would help growth, but above all government investment in cross-England rail freight infrastructure is required.
Liverpool also stands to gain from being a place that currently has facilities for trade checks - an EU-accredited Border Inspection Post meant for trade with non-EU countries.
More of those facilities are now required, for example with the Republic of Ireland. Liverpool could be part of the answer.

But of course, under the Withdrawal Agreement's renegotiated chapter on Northern Ireland, there will also be new trade checks within the United Kingdom.
Across the Mersey, the Stena ferry leaves twice daily for Belfast. Under the deal, this currently seamless internal trade will be subject to new EU law formalities, carried out by UK officials, although on occasion directed by EU officials.

Here, the Brexit choice in the coming months will be on what type of checks on this internal trade happen, not if they happen at all. Ian Hampton, a Stena line boss, tells me: "there's a border, and a border requires checks."
"Our role, of course is not fulfil the role of the state by doing those checks. But clearly we need to facilitate them.
"Of course, the complication in the Irish Sea, is that's where they've moved the border. The border is now physically a sea border," he tells me.

In the region some are considering whether the checks required for Birkenhead could mean some Belfast ferry traffic is routed via the inspection posts across the Mersey in Liverpool. One problem is that the passage through the Queensway tunnel under the Mersey would not be secure, in terms of agrifood checks, for example.
Further upstream past Port Sunlight, near the top of the Manchester Ship canal, is the famous Ellesmere Port Vauxhall car plant.

Last year the owners of the plant, European giant PSA, said they would build the new Astra, though only if a No Deal Brexit was avoided.
Earlier this month the production of the Astra estate at a German plant was announced to workers.
The avoidance of a No Deal Brexit is not enough, according to PSA, who want to ensure a continuation of the trading conditions that led to the rebirth and growth of car production in the UK until 2016.

The investment required for the production of a new vehicle in Ellesmere Port "continues to be contingent on the terms of the future trading relationship between the UK and the EU, and ensuring that PSA can make a profitable investment."
A similar dilemma exists for much UK car production, which has suffered from a general slowdown in the market as well as a starving of new investment because of the rising probability that Brexit will damage supply chains and lead to trade tariffs.
That lack of investment has come at a particularly sensitive time, when car plants are being refitted for a new world of electric and autonomous cars.
The risk is that three, or perhaps now four, years of Brexit-related doubts to the business model, combined with general overcapacity issues, leave UK assembly in a very tricky situation.

Some of the owners of major companies wonder just how much the UK wants to retain mass car manufacturing.
Prime Minister Boris Johnson himself, when Foreign Secretary, wrote dismissively about car manufacturers: "In the next 20 years I believe traditional car companies will vanish as we switch to automated vehicles," he said, though it is existing, mainly EU-based car companies that have filed the vast bulk of the patents in this field.
Some in the industry have observed a view in government that their post-Brexit strategy should prioritise regulatory freedom for things like the artificial intelligence and high tech research and development for manufacturing of the future, rather than the existing seamless supply chains used by current car factories. This argument is not being made publicly.
That said, unions at the plant struggle to animate workers in this Leave-voting area on these issues. Workers are used to threats of closure in the regular rounds of bidding for new production.

Not far from the Vauxhall plant at the "Neu You" hair salon, the new beginnings are met with a mixture of relief, concern and indifference, including from some with close relatives working at the plant.
Not everyone was aware that Friday was the big day. Some told me they were relieved that everyone could talk about something else. Others were worried about jobs, of EU-worker NHS colleagues not returning.
The truth is Britain's exit form the EU represents a constitutional and political moment.
The long-term economic impact will depend on the fine judgements and trade-offs as calculated by this government.
EU rules will be repealed and instantaneously reapplied for the period of transition.
Just how much extra US trade comes to the Port of Liverpool, how many checks there will now be needed on the ferry from Birkenhead to Belfast, and the future of Ellesmere Port car manufacturing, are all up for grabs in the negotiation to come, with impacts well after the last hours of January and well beyond the famous River Mersey.
https://www.bbc.co.uk/news/business-51329176?fbclid=IwAR0oFGZhYr5B25G-wM5F3F06oDfd-hNDBdEeHadbwBh5w_hpclQYGlw2gEc
at February 15, 2020