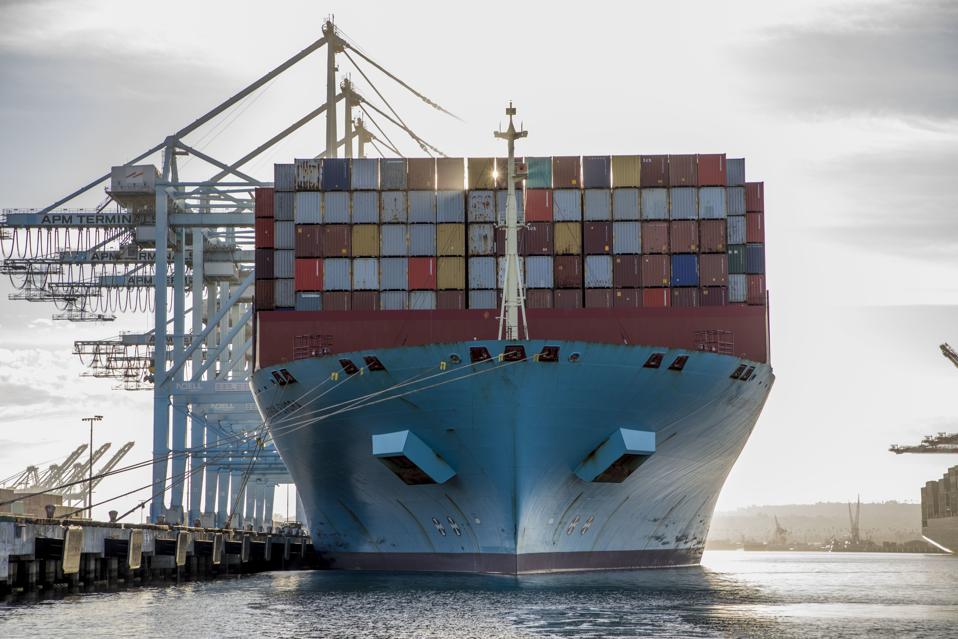 “First-quarter guidance is that we'll be down about 15%, mostly on the back of the coronavirus and the lack of factory production in China,” Gene Seroka, the Port’s executive director, tells Forbes. “We'll probably see arrivals in late April or early May pick up just a bit. It'll come in waves.”
The 7,500-acre facility south of downtown Los Angeles is the biggest entry point for Chinese goods to the U.S., so it’s kept close tabs on economic activity there since the COVID-19 strain of coronavirus began to spread quickly in late 2019. Though the illness remains a problem, there are signs of improvement in China, Seroka says.
“We've cross-referenced all the information that we hear out of Beijing and other local municipalities with things like traffic patterns, energy consumption, pollution rates. Everything seems to indicate right now that the factories broadly are operating at 50% of capacity. That's up from 40% a couple of weeks ago.”
Today In: Transportation
Imports at the facility plunged 22.5% in February to 270,025 twenty-foot equivalent units, or TEUs, from a year earlier. Exports declined 5.7% to 134,468 TEUs.
Though the port facilitated $276 billion of trade last year, the coronavirus hit extends a slump that ran throughout the fourth-quarter of 2019 as a result of the Trump Administration’s aggressive tariffs on Chinese goods coming into the U.S. While there is a tentative agreement between the U.S. and China that would ease those tariffs, it had had no meaningful impact when the coronavirus broke out.
PROMOTED

China’s industrial output, hammered for weeks by the public health crisis, investment and consumer spending are expected to show a broad contraction in government statistics due on Monday. Still, the country has had some success in reducing new cases of COVID-19, and the government said last week that it expects to be fully functional by June. Currently, about 65% of people have returned to work, based on data from the Baidu Migration Index.
Confirmed coronavirus cases are approaching 3,000 in the U.S., a number that will climb in the weeks ahead as testing finally becomes more widely available. But health fears have led some consumers to react by panic-buying toilet paper, paper towels, hand sanitizer and bottled water in recent weeks, goods that for the most part aren’t shipped from other countries.
“The ability to manufacture that type of product domestically is good,” says Seroka. Even wood pulp needed by U.S. factories to make paper products largely comes from North American sources.

TVs, smartphones and shoes could be another matter. “We're bringing in the big box retailer type products. Clothing, electronics, furniture, those are the big-ticket items that are coming inbound,” Seroka says.
Next Trucking, a Los Angeles-based startup that arranges shipments of goods into and out of the port, says along with lower import volume, a build-up of empty shipping containers is further complicating things. “Empties must be stored at terminals, warehouses or yards,” says CEO Lidia Yan. “We’ve seen empty backlog grow as terminals reduce the empty return appointments or refuse acceptance because you need to have space near the terminal.”
It typically takes 12 to 14 days for ships crossing the Pacific Ocean from China to reach Los Angeles, which aligns with the incubation period for COVID-19. The U.S. Coast Guard monitors incoming cargo vessels headed for domestic ports and has set new regulations requiring a ship’s captain or master to notify them about the status of crew health, Seroka says. There are civil and criminal penalties for failing to do so, with fines of up to $94,000 per incident.
Each ship has a crew of 12 to 15 people, though they typically don’t take shore leave when they come to port, Seroka says. “I'm proud to report so far no vessel incidents at this point in time based on coronavirus impacts.
He’s hopeful that by August or September circumstances at the port could be back to normal, assuming China continues to recover and the U.S. can slow or stop the spread of COVID-19. He’s seen declines and rebounds to cargo activity over the past two decades, including the aftermath of the 9/11 terrorist attacks; the 2008 recession; and previous health panics, including in the SARS outbreak. “I lived in China during SARS, so I've seen on the ground what a viral epidemic looks like and this is much worse.”
“In the supply chain, there's always going to be some unknown. That's the thing that is so great about this industry, how we rally together when there's another hit or a shock to the supply chain,” he says. “But it's also very heartening to see all these people pulling in the same direction while recognizing that humankind needs help as well.”
Follow me on Twitter or LinkedIn. Send me a secure tip.