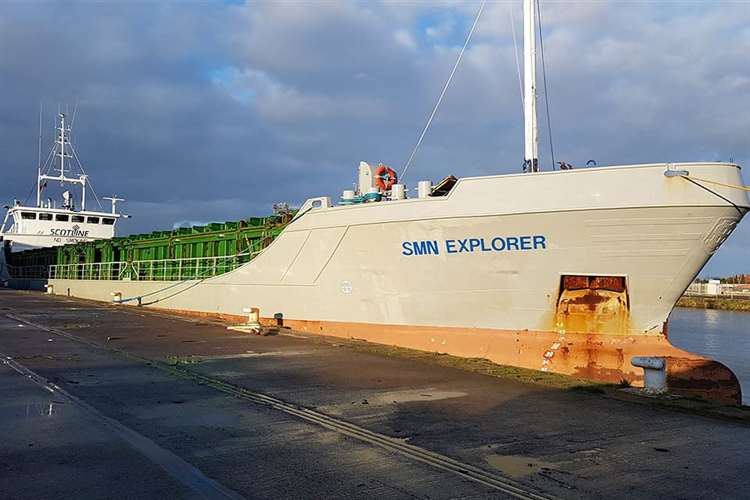 A shipping company has been fined £120,000 over the death of a man in Lynn's Alexandra Dock more than two years ago.
Marine accident investigators described the incident in which Alfred Ismaili was killed as "entirely avoidable", following a court hearing today.
Mr Ismaili, who was 36, was crushed to death by a falling hatch cover during a lifting operation aboard general cargo vessel SMN Explorer on February 1, 2018.

The Sky Mare Navigation Company, the Greek firm which managed the ship, pleaded guilty to charges of failing to comply with the Merchant Shipping and Fishing Vessels (Lifting Operations and Lifting Equipment) Regulations 2006 during a hearing before magistrates in Chelmsford today.
The charges were brought by the Maritime and Coastguard Agency (MCA), after investigations revealed that, without a formal operating procedure being in place for opening and closing the heavy hatch cover, Mr Ismaili had attempted to climb up the inside of the cover to try and access the equipment needed to secure it to a crane.
The cover fell and crushed Mr Ismaili, an Albanian national. Despite first aid being carried out at the scene and an ambulance attending, he was declared dead shortly afterwards.
The inquiry uncovered a lack of risk assessment, and found that the operation had not been properly planned.
There was also evidence of a poor safety culture, evidence of a tolerance of poor safety practice and clear evidence of a failure to take the necessary precautions with the actual lifting equipment.
An earlier probe by the Marine Accident Investigation Branch concluded the incident "was the result of procedural inadequacies and a lapse of supervision."
The company was fined a total of £120,000 and ordered to pay costs of £23,973.
Dee Upshall, lead maritime investigator for the MCA said after the hearing: “This tragedy was entirely avoidable.
"If a risk assessment had been carried out, or if Mr Ismaili had been given instruction or properly supervised as should have been the case, this death could have been prevented.
“We are committed to stopping dangerous practices, and to holding accountable those responsible.”
https://www.lynnnews.co.uk/news/company-fined-120k-for-death-of-worker-at-kings-lynn-dock-9101920/