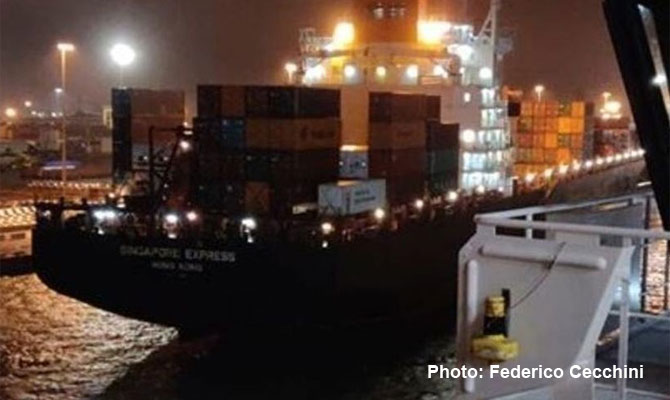 Container ship SINGAPORE EXPRESS was torn off her moorings at Darsena Toscana container terminal, Livorno, Italy, shortly after midnight Mar 6. Livorno was battered by gale-force regional wind by the time of an accident.

Understood aft moorings broke up, while fore moorings remained intact thanks to timely slackening. Port authorities were immediately alerted, deployed tugs assisted the ship and understood, she was moored alongside opposite berth. Crane was reportedly slightly damages by ship’s superstructure. On a photo SINGAPORE EXPRESS right after her stern moorings broke up, drifting across harbor with her aft still held by moorings. The ship arrived at Livorno from Spain on Mar 5, left Livorno on Mar 8, understood with a delay caused by this mishap.
Container ship SINGAPORE EXPRESS, IMO 9200809, dwt 66793, capacity 4843 TEU, built 2000, flag HK, operator Hapag Lloyd, according to Livorno sources.