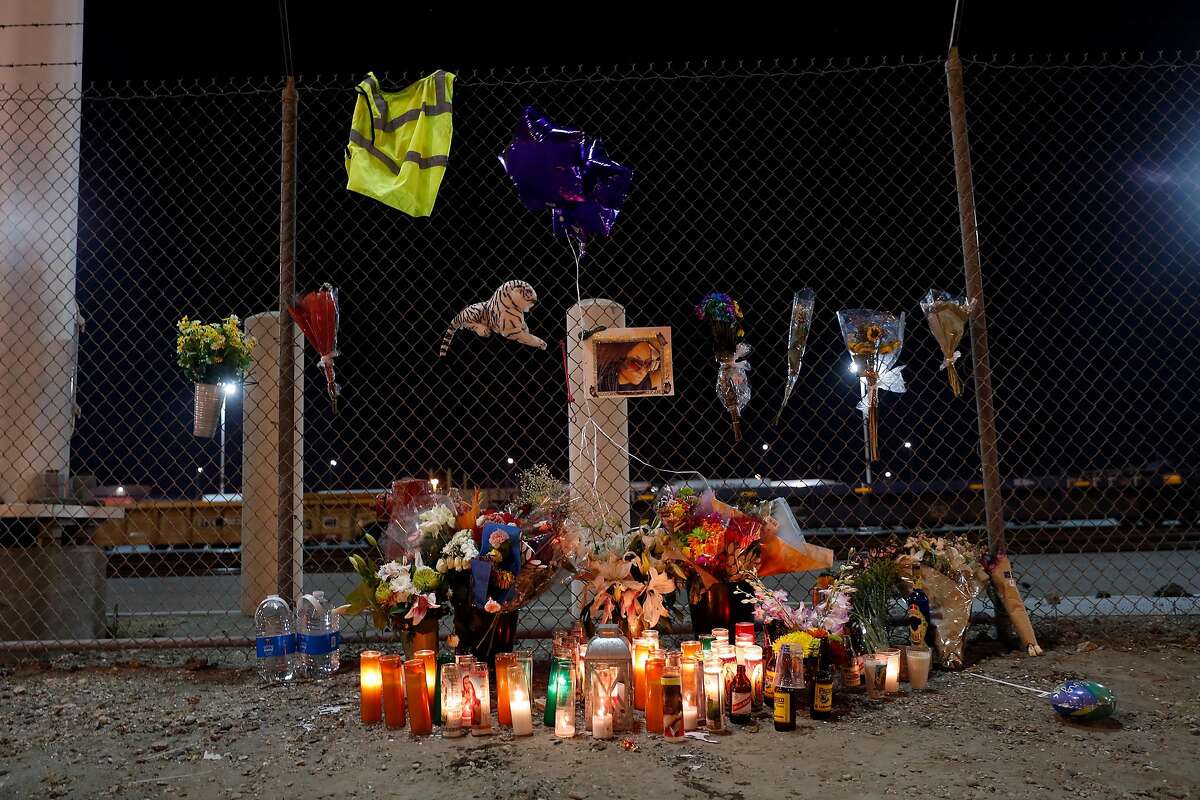 An informal memorial was set up at the site where Rasheeda Marsh crashed her car into illegally parked truck trailer at the Oakland port last Saturday.Photo: Scott Strazzante / The Chronicle

On break from her job as a dock worker at the Port of Oakland last Saturday night, Rasheeda Marsh crashed her Honda into the front of an unattached truck trailer, illegally parked in a left-hand turn lane on Middle Harbor Road.
Marsh, a 39-year-old Oakland resident, died at the scene, leaving behind a 4-year-old son and grieving mother, brother and boyfriend. Longshoremen and port workers interviewed by The Chronicle said the accident could have been prevented. They say they’ve complained to the port, city and Oakland police for years about illegally parked trucks in the median of the road. 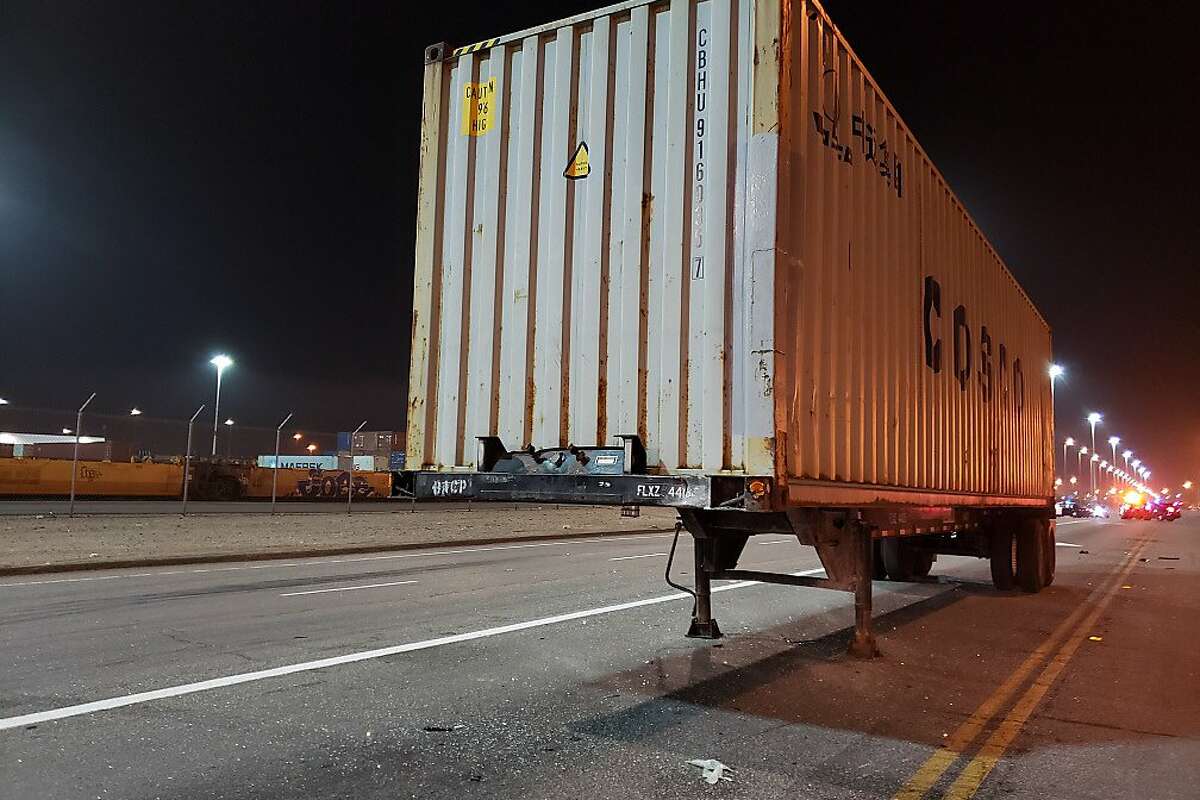 “There’s definitely safety issues down here,” said Craig Lauderdale, a 32-year longshoreman veteran who said he’s complained to the port numerous times. “There have been complaints, and police have come down here a few times, but you rarely see them. If I parked my car in the median of Broadway it’d be towed, so why should it be allowed in the port?”

At issue is a practice in which truckers over the weekend — and to a lesser extent on weeknights — illegally park their trucks, trailers and sometimes just an empty trailer chassis in the median of Middle Harbor to reserve a spot in line when the port’s west gate opens. Those vehicles and equipment can be hard to see on the long straightaway, often a magnet for illegal street racing that has ended in fatal crashes, though not involving parked trucks.

Port spokesman Mike Zampa said it’s a public road, and it’s up to Oakland police to enforce traffic regulations.
“There are occasionally trucks that get into a queue before the gates open, not that frequently,” Zampa said. “It’s not something they’re supposed to do, and when we see it, we report it.” 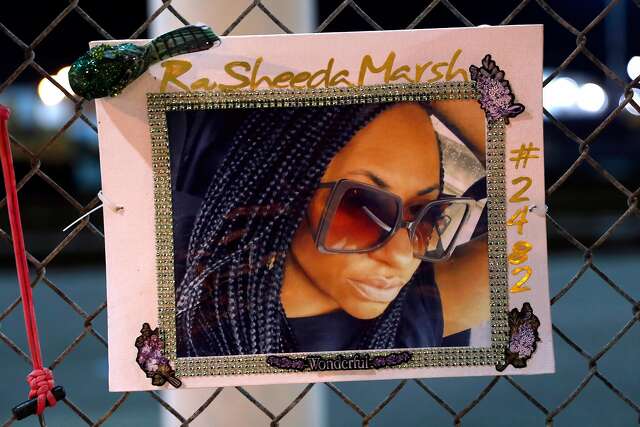 Oakland city records show only one call for service for an abandoned vehicle on Middle Harbor since 2010. The city’s Public Works Department handles parking enforcement and Oakland police handle traffic enforcement. An Oakland police spokeswoman said the department has received no complaints from the port about the illegal parking issue.
Signs along one shoulder warn truckers of “No Idling,” while others say “No Parking.” There are no signs indicating no parking in the turning lane or median, but that is never legal. A traffic fine for impeding a lane of traffic is $63.
Less than two years ago, an Oakland police officer was critically injured after slamming his patrol SUV into a parked semi-truck while responding to a call on the same stretch of roadway, early on a Monday before the gates opened to let trucks queued up over the weekend into the port.
Officer Jordan Wingate was responding to a report of a suspicious person in August 2018 and traveling eastbound on the 1900 block of Middle Harbor when his vehicle collided with another car and then crashed into a parked semi-truck, officials said at the time. He has not returned to the department and is still recovering from his injuries, police said.


“You would have thought after what happened two years ago the port would’ve cracked down on it,” Lauderdale said.
On Monday, trucks continued to park in the turning lane, which extends into a median outlined by double-yellow lines, Lauderdale said. He snapped a photo of three trucks already parked in the spot around 7 p.m., shortly after the port day shift ended.
On Tuesday, a reporter and photographer saw a line of trucks on the shoulder with a security guard nearby. About 100 feet east of the port entrance, dozens of memorial candles flickered in the still night air along a fence where Marsh’s car came to rest Saturday just before midnight.
“Rest in Love #2482,” someone wrote in black marker on Marsh’s yellow longshoreman safety vest hanging on the cyclone fence. A Tequila bottle, dozens of candles, flower bouquets and stuffed animals marked the spot where she died after ricocheting off the parked truck trailer. Police have not said who parked the container in the turning lane or how Marsh crossed over to hit it as she traveled eastbound.
Police have said alcohol and drugs do not appear to have been a factor in the collision, and the incident is still under investigation. A photo of the truck trailer given by a dockworker to Marsh’s family and shared with The Chronicle shows minor damage to the heavy equipment in the turning lane.
Anthony Leviege, Marsh’s brother who has worked for two decades as a longshoreman at the port, was hanging out with friends in downtown Oakland on Saturday night. A coworker called and said his sister had been in an accident, and Leviege drove to the scene expecting a minor fender bender. When he arrived, he was stopped by crime-scene tape, but could see his sister’s car in the distance crashed into a fence.
“I thought, ‘Oh s—, she had an accident!’” Leviege said, but he still didn’t grasp the severity. He walked up to an officer at the scene and told him that was his sister.
“She didn’t make it,” the officer told him. 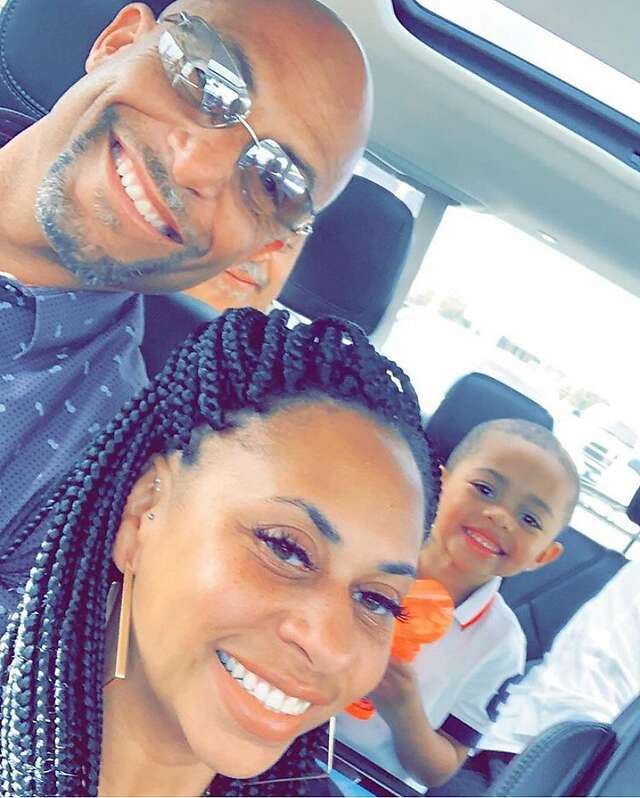 “It’s weird, you see people on TV and those people respond in a certain way, everybody breaks down,” he said. But he and his mother who came to the scene were more stoic and shocked, he said. His mother, he recalled, leaned over to her son and said, “It’s just you and me now.”
Leviege said the truck parking has been an issue for years, and he has contacted an attorney to weigh his options.
“It’s just a dangerous situation. At the end of the day ... at the top of the food chain, it’s the companies. The truckers just feel they got to be at the front of the line so they don’t have to wait four hours for their box, and they get paid by the box,” Leviege said. “If you got to feed your family by the box, you’d break the rules, too.
“The companies don’t make changes until someone dies,” he said. “Safety can’t affect profit, that’s the dilemma of capitalism.”
Tom Villeggiante, a supervisor with International Longshore and Warehouse Union Local 91, said the illegally parked trucks have been an issue for years, and the unions have issued complaints.
“My son works down there, and he says he’s almost run into them before,” Villeggiante said. “If you’re not paying attention, you can run into them.”
Villeggiante said he’s heard of desperate truckers pulling out a container, dropping it into the median, immediately returning to the port to pick up a second container and then returning for the parked box later.
For Leviege, he’s now busy preparing his younger sister’s funeral and caring for her toddler son, Lloyd.
“She was just full of energy, always happy. ... She was very excited to become a longshoreman,” Leviege said. “She was a beautiful person, a free spirit.”
It was about a year ago that he helped bring his sister into the port workforce, where she held two jobs to provide for her son.
“For me, being a longshoreman has been a benefit to me, and I was glad I could help my sister,” Leviege said. “Now it feels like a curse.”
Matthias Gafni is a San Francisco Chronicle staff writer. Email: matthias.gafni@sfchronicle.com Twitter: @mgafni
Posted by Felixstowe Dockers